Connecting the Atlantic and Pacific oceans, the Panama Canal observes its centennial in 2014 as a huge expansion project is underway. 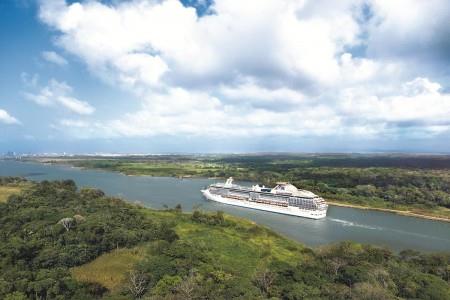 For anyone with a sense of history or interest in monumental engineering feats, a transit of the Panama Canal has to be one of the greatest travel adventures imaginable. For cruise aficionados in particular, a voyage through the “Big Ditch” is definitely bucket-list material.

A man-made marvel of epic proportions, the Panama Canal opened for business 100 years ago—on Aug. 15, 1914. This year’s centennial observance is a perfect time to reflect on the grueling construction project that provided a long-dreamed-ofshortcut linking the Atlantic and Pacific oceans.

Better yet, consider a cruise featuring the famous passageway that threads the center of Panama, the thinnest piece of land between Central and South America. Adding to the excitement in the region is the highly anticipated canal expansion project set for completion in late 2015 or early 2016.

The largest project since the canal’s original construction will create a new, wider lane of traffic parallel to the existing canal and a new set of locks on both the Atlantic and Pacific sides. Each lock complex will be able to accommodate ships termed Post-Panamax, a word used to describe those vessels that currently cannot make it through the canal. The term Panamax refers to the largest ships able to make the transit. 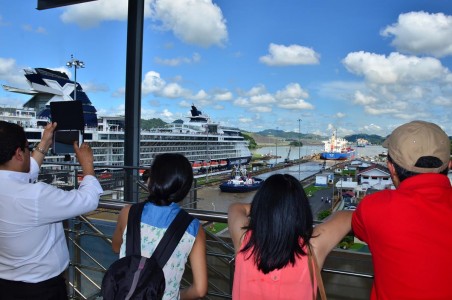 Viewing platforms at the locks allow visitors to watch the action.

Among Panamax vessels offering Panama Canal cruises in coming months are Princess Cruises’ Island Princess and Coral Princess, Celebrity Cruises’ Celebrity Infinity, and Norwegian Cruise Line’s Norwegian Jewel, Norwegian Pearl and Norwegian Star, which fall into the 91,000-93,000-gross-register-ton range and hold 2,200 to 2,400 passengers. Anyone who has traversed the canal on one of these ships knows there is little room to spare between the hull and side of the locks.

Time spent on the waterway, however, represents only a small part of a Panama Canal cruise, as the transit is just a day-long affair on an itinerary lasting anywhere from one to three weeks. While certainly the centerpiece, the canal and its operations have to share the spotlight with shore excursions to lush tropical rain forests in Panama and neighboring Costa Rica, with some cruises also visiting Guatemala or Nicaragua. Amid the verdant foliage you can ride an aerial tram above the forest canopy, take a jungle walk or boat ride, and even go canoeing, kayaking or whitewater rafting. 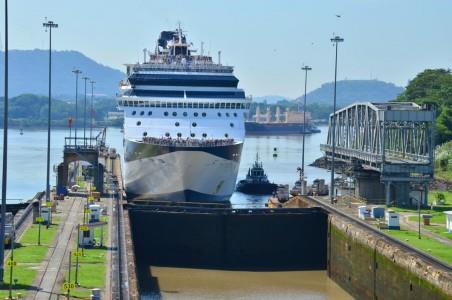 Aside from offering ecotourism opportunities in Central America, a typical cruise between Florida and California calls at islands in the Western Caribbean and ports along the Pacific coast of Mexico. Cartagena, Colombia, a Caribbean city known for its ancient fort and other Spanish colonial trappings, adds a dash of South American flair to many itineraries.

The star attraction of these cruises—and their real selling point—is, of course, the canal and a set of locks that raises ships 85 feet to Gatun Lake, then lowers them down on the other side, back to sea level. Passengers get up early for the big day, lather on sunscreen, and find a prime viewing spot on the bow as cruise ships mingle with freighters waiting their turns to enter the locks. Passengers on big ships marvel at the tight fit in the locks and snap plenty of pictures of the electric towing locomotives, or “mules,” that help steer the vessels through the bathtub-like chambers that fill with water. A Panama Canal Authority pilot comes aboard to guide each ship, while a narrator describes the locking process and gives historical background. A full transit of the 51-mile-long Panama Canal takes eight or nine hours. Much of the canal is bordered by tropical wilderness. 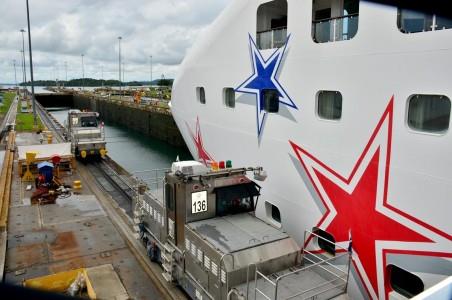 The Norwegian Star squeezes through locks on the Panama Canal.

Much of the canal is bordered by tropical wilderness, a swampy environment that created a breeding ground for mosquito-borne diseases (like malaria and yellow fever) that accounted for most of the 27,000 deaths during the 34 years the canal was being built. The French began the project in 1880, but their efforts to create a sea-level passage ended in failure. The U.S. took over in 1904 during the administration of Theodore Roosevelt, who viewed the canal as providing an important route for American battleships in the region. The American team, opting to build a system of locks, got the job done in just 10 years, and, as a testament to their work, to this day most of the original structures and equipment are still in use. Under a treaty signed in 1977, canal operations passed from the U. S. to Panama at the stroke of midnight on Dec. 31, 1999, ending 85 years of American control of the Canal Zone, now called the Canal Area.

More than 15,000 ships, accounting for about 5 percent of world commerce, use the vital link between oceans every year. To stress the magnitude of the shortcut provided by the Panama Canal, a ship traveling from New York to San Francisco saves about 8,000 miles over going the long way around the tip of South America.

Many roundtrip cruises from Fort Lauderdale feature just a partial transit of the canal—entering at Colon in the morning, going through the first set of locks (Gatun Locks, seven miles from Colon), turning around in Gatun Lake and exiting the canal at Colon in the evening. A full transit would continue on to the Pacific via the Pedro Miguel and Miraflores Locks.

Princess Cruises’ Island Princess and Coral Princess offer a series of 11-day, partial-transit cruises this season, making 21 departures from Fort Lauderdale between October, 2014 and April 2015. For those with more time to spare, Princess has one-way, 15-day journeys between Fort Lauderdale and Los Angeles that include the full transit; the two-day “Canal Experience” on select voyages features a day at Fuerte Amador to explore Panama City.

The 92,000-gross-register-ton Coral Princess and Island Princess are among the largest ships (termed Panamax) that can fit in the Panama Canal locks, but those looking for an intimate experience can choose from smaller vessels that appeal to a more adventurous crowd. Windstar Cruises’ Wind Spirit, Star Clippers’ Star Flyer, and Lindblad Expeditions’ National Geographic Sea Lion offer one-week voyages that start in Panama or Costa Rica and visit out-of-the-way islands and nature areas.

Most lines’ Panama Canal cruises are concentrated in early fall and early spring, when ships are being repositioned between their Alaska and Caribbean seasons. In some cases, travelers can make it a three-week trip by extending their canal cruise with a five- or six-day Pacific Coast segment between California and Vancouver. 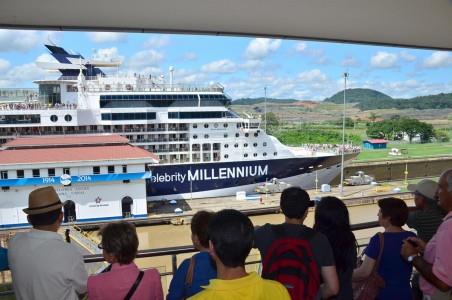 Visitors watch the Celebrity Millennium at the Miraflores Locks.

On partial-transit cruises, passengers can get off the ship for shore excursions from Colon (at the Atlantic entrance), board a tender boat for excursions from the canal-side town of Gamboa, or just stay on the ship as it goes into Gatun Lake and back out. One option from Gamboa is a small-boat excursion that takes passengers through the remaining two locks, all the way to the Pacific, with a bus ride back to the ship at Colon.

Other popular excursions include an aerial tram ride in Gamboa Rainforest, a visit to an Embera Indian village on the Chagres River (sometimes reached by canoe), and a ride in vintage luxury cars on the Panama Railway as it travels between the Atlantic and Pacific, parallel to the canal. Visits to Panama City, the most cosmopolitan city in Central America, might include Parque Natural Metropolitano, a rain forest inhabited by toucans and parrots, and the charming Casco Viejo quarter with museums, historic churches and sidewalk cafes on quiet plazas.

Cruise lines also present a wide choice of Costa Rica tours. The Atlantic port of Puerto Limon, along with Puerto Caldera and Puntarenas on the Pacific, are jumping-off points for national parks and preserves teeming with exotic animals, from monkeys and sloths to tortoises and crocodiles. Glide silently through the jungle on the canopy zipline at Veragua Rainforest, tackle the three cable bridges high above the treetops at Tropical Forest Sky Walk, go horseback riding through forests and cattle pastures at Hacienda Nosovar, or take the Jungle Crocodile Safarion the Tarcoles River. The scenic town of Sarchi, a center of traditional craftsmanship, is famed for its oxcarts painted in intricate designs. Some Costa Rica excursions visit coffee and banana plantations.

Puerto Quetzal, Guatemala, is the gateway to the colonial capital of Antigua and Maya ruins at Tikal (a 90-minute flight away). The truly fit can join a trek up 8,373-foot Pacayo Volcano. From Corinto or San Juan del Sur, Nicaragua, shore tours visit colonial cities like Leon and Granada, the capital city of Managua, and geothermal areas with fumeroles, bubbling mud pots and active volcanoes.

Undoubtedly, the splendor of the tropics is reason enough to venture to Central America on a Panama Canal sailing. Witnessing the untamed jungle up-close only enhances one’s appreciation for the masterminds and laborers who built an ocean-to-ocean waterway that clearly has withstood the test of time. Starting its second century of service, the Panama Canal promises to continue as a critical link in the global economy—and one of the most alluring cruise destinations in the world.