Norwegian Encore to Debut in November 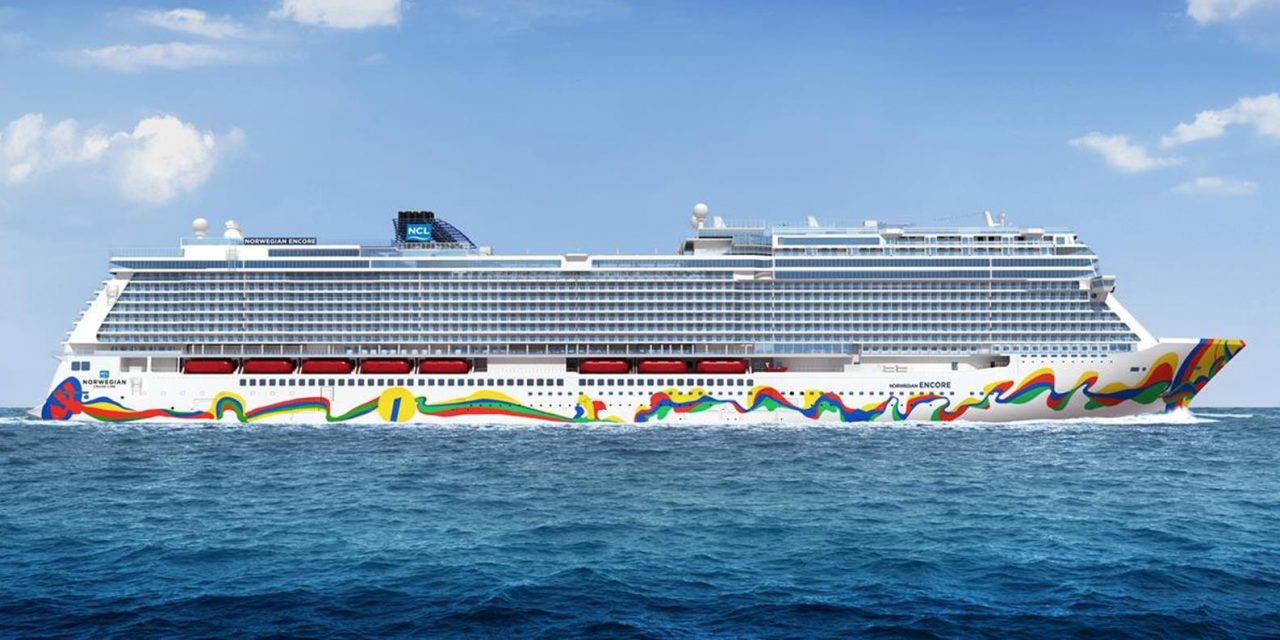 Norwegian Cruise Line’s newest ship will be a crowd-pleaser

When Norwegian Cruise Line’s Norwegian Encore debuts in November 2019, she’ll bring innovations in entertainment and dining. As the fourth and final Breakaway Plus-class ship, she will be homeported at the line’s new PortMiami Terminal, sailing on seven-day Eastern Caribbean cruises beginning November 17 and continuing through April 12, 2020. She’ll then offer other itineraries.

The Norwegian Encore accommodates 4,000 guests and is approximately 169,000 gross registered tons. The abstract hull artwork has been done by Spanish artist Eduardo Arranz-Bravo. New entertainment venues are onboard, and along with incredible dining options, the Norwegian Encore brings guests closer to the sea, with its quarter mile-long ocean promenade, The Waterfront, where guests can enjoy outdoor lounging, dining and cocktails. 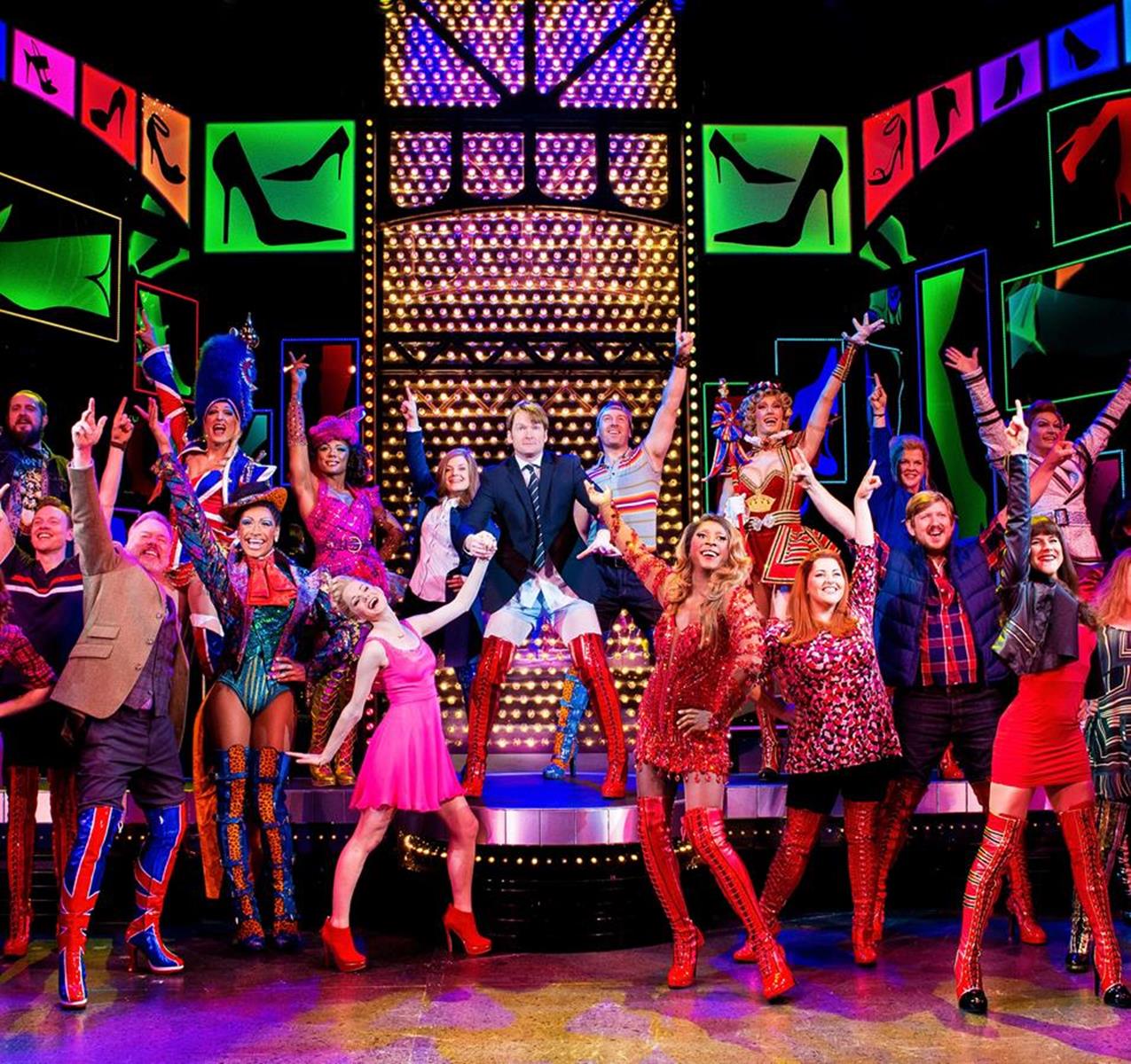 The Choir of Man, which recently debuted on the Norwegian Escape, will be on the Norwegian Encore. The talents of nine guys, performing everything from classic rock to sing-along anthems, combine high-energy dance and music. Another entertainment option that made its debut on Norwegian Bliss is an interactive cocktails and theater show, “Happy Hour Prohibition: The Musical.” Another is “The Cavern Club,” which takes guests back to the legendary Liverpool club with performances by a Beatles cover band. 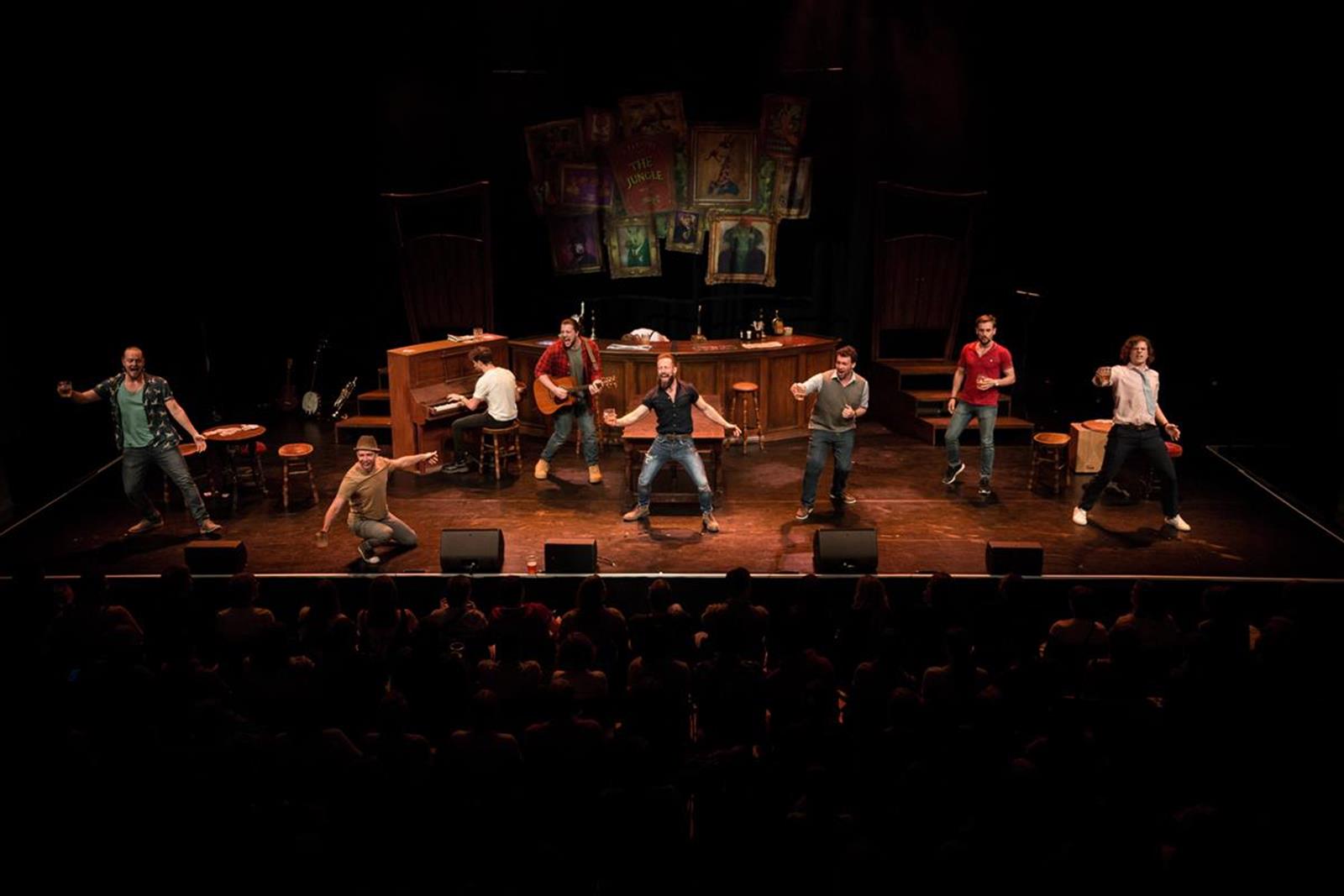 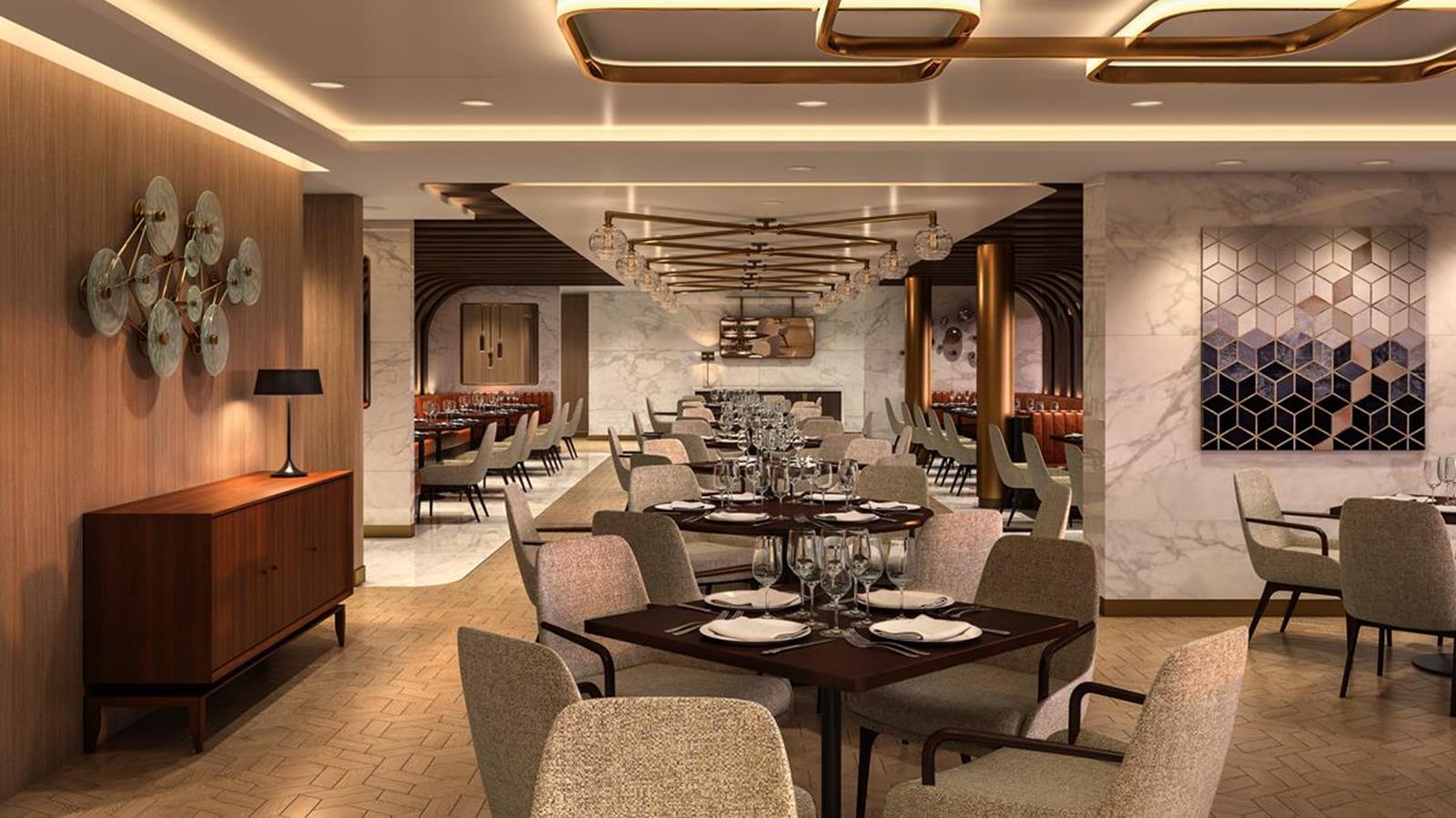 The name Scarpetta is derived from the Italian expression “fare la Scarpetta” – “savor the meal to the last bite.” The Italian word “onda”  means “wave.” The menu at Onda by Scarpetta will feature the bold and rich flavors of Italian cuisine, including seafood, signature dishes and desserts. The new dining venue features a modern design and an elegant atmosphere. Guests can enjoy expansive views offered within the restaurant itself as well as dine outdoors on The Waterfront. 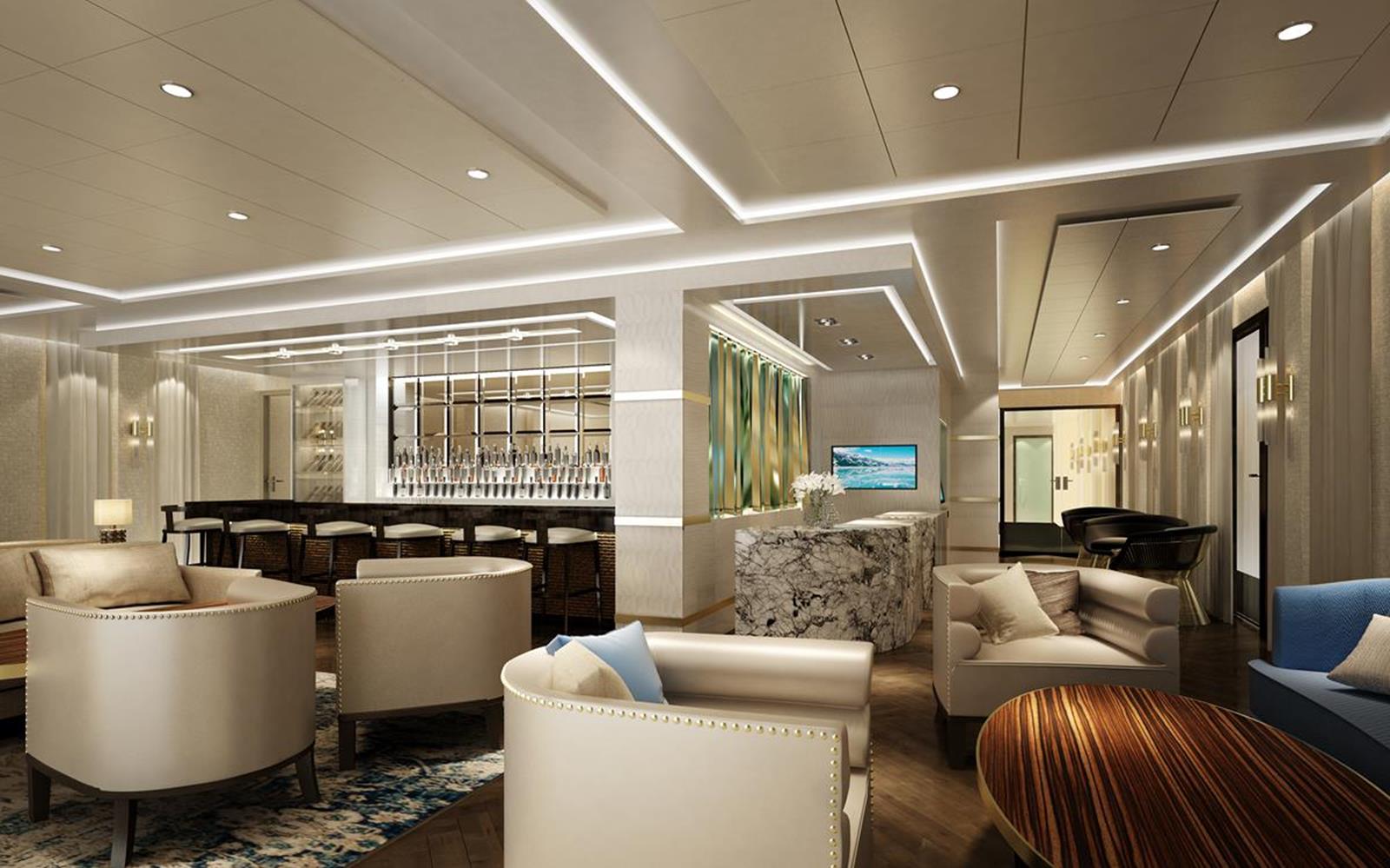 Complimentary dining for guests includes the main dining rooms – The Manhattan Room, Savor and Taste. The Garden Cafe provides a buffet for all three meals, while The Local Bar and Grill offers 24-hour pub fare. Guests staying in The Haven by Norwegian® can dine at The Haven Restaurant, which is exclusive to them. 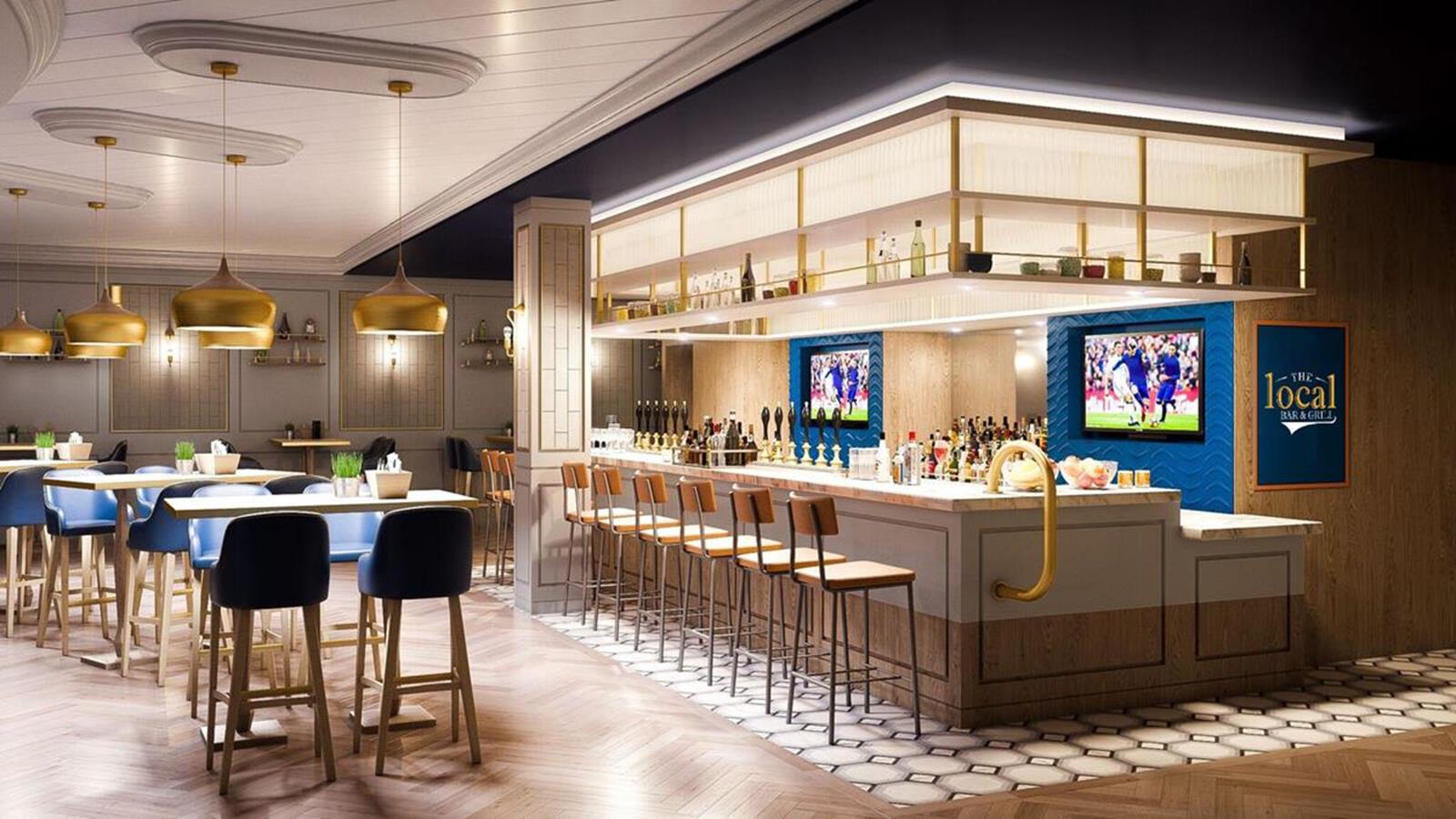 The Local Bar and Grill

Specialty dining options include Cagney’s Steakhouse, featuring premium cuts; the American Diner, which has all-American classics; Le Bistro, which serves French cuisine; Los Lobos, offering premium Mexican cuisine, and Ocean Blue, which has fresh seafood creations. Others include Q for authentic Texas barbeque, Teppanyaki for an entertaining Hibachi-style dining experience and Food Republic, which offers a fusion of flavors from around the world. 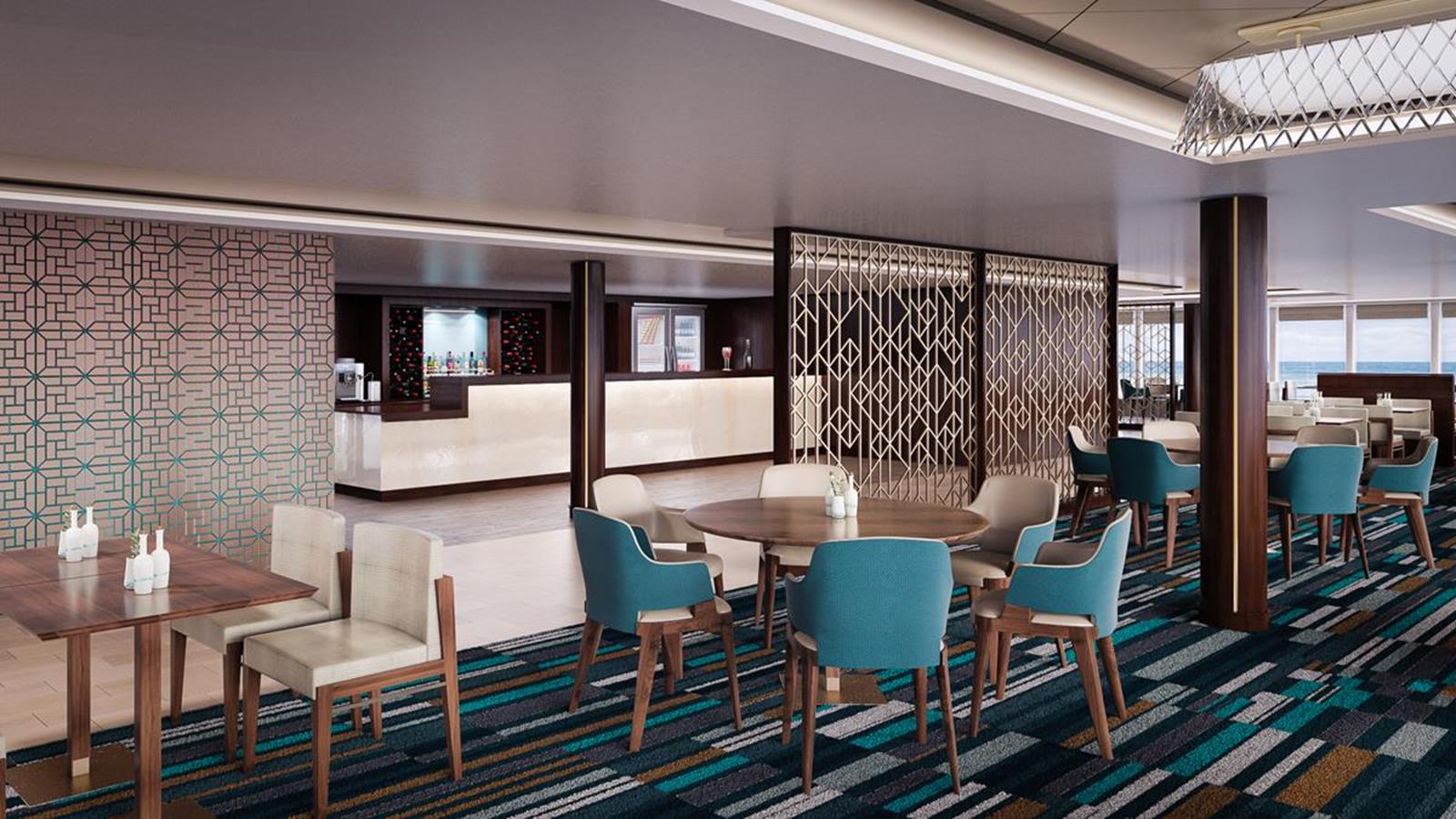 Recreation – From Go-Karts to Waterslides

Norwegian Cruise Line is the only cruise line that offers go-karts at sea, and the Norwegian Encore will have a two-level race track with four points that extend up to 13 feet over the side of the ship and 10 exhilarating turns. 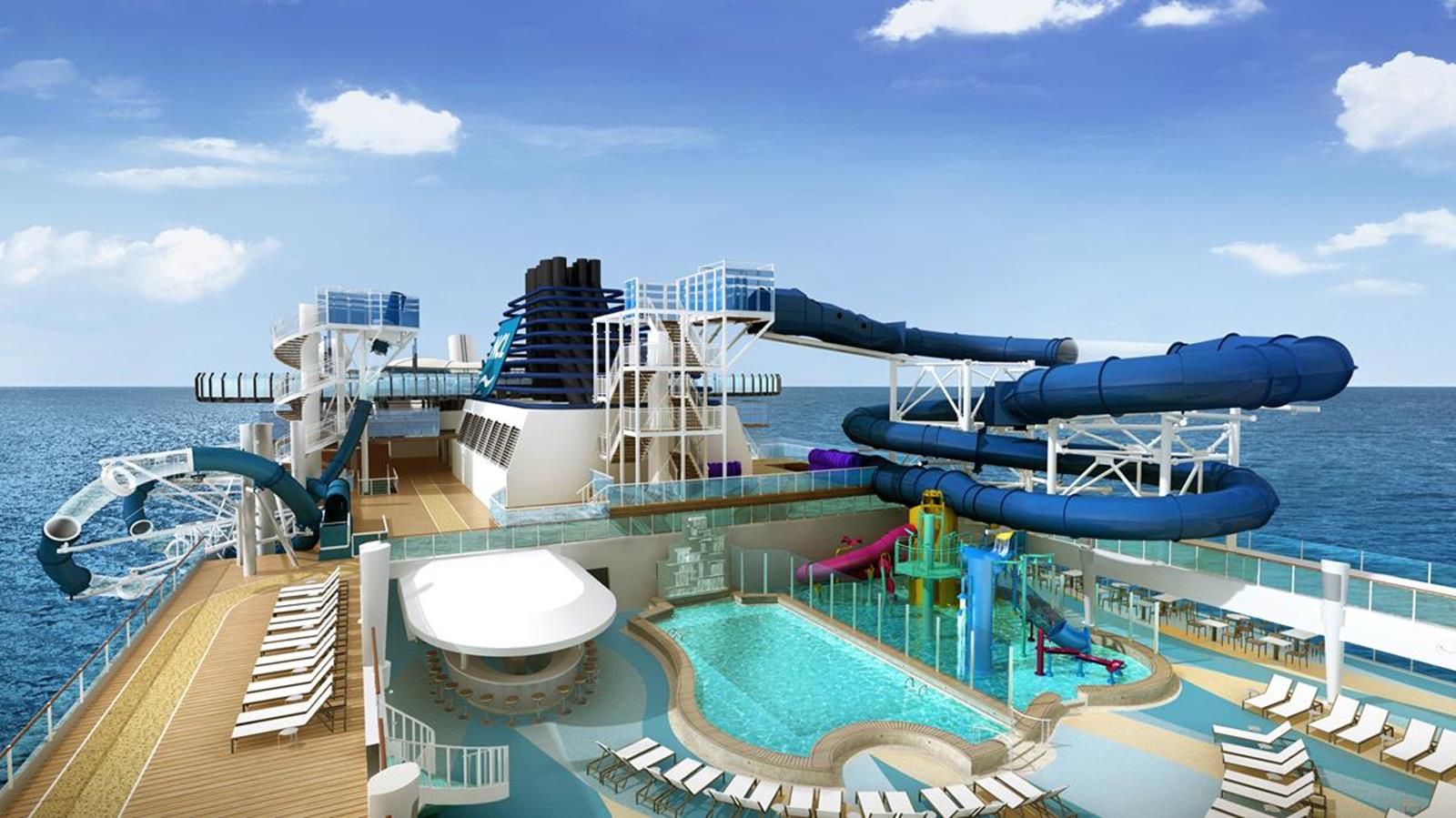 From a covered viewing area at the center of the track, guests can tag passing go-karts with a laser beam.

The Norwegian Encore’s Galaxy Pavilion is a 10,000-square-foot indoor virtual reality complex featuring interactive gaming with cutting-edge technology. Guests of all ages can enjoy virtual experiences as simulators take them on a labyrinth of adventures. Another is the open-air laser tag arena, which first debuted on the Norwegian Bliss. The popular Aqua Park on the Breakaway- and Breakaway Plus- class ships is also onboard the Norwegian Encore. It includes two multi-story waterslides, one of which extends 11 feet over the edge of the ship and then loops down to the deck below.

A Paradise for Cocktail Connoisseurs 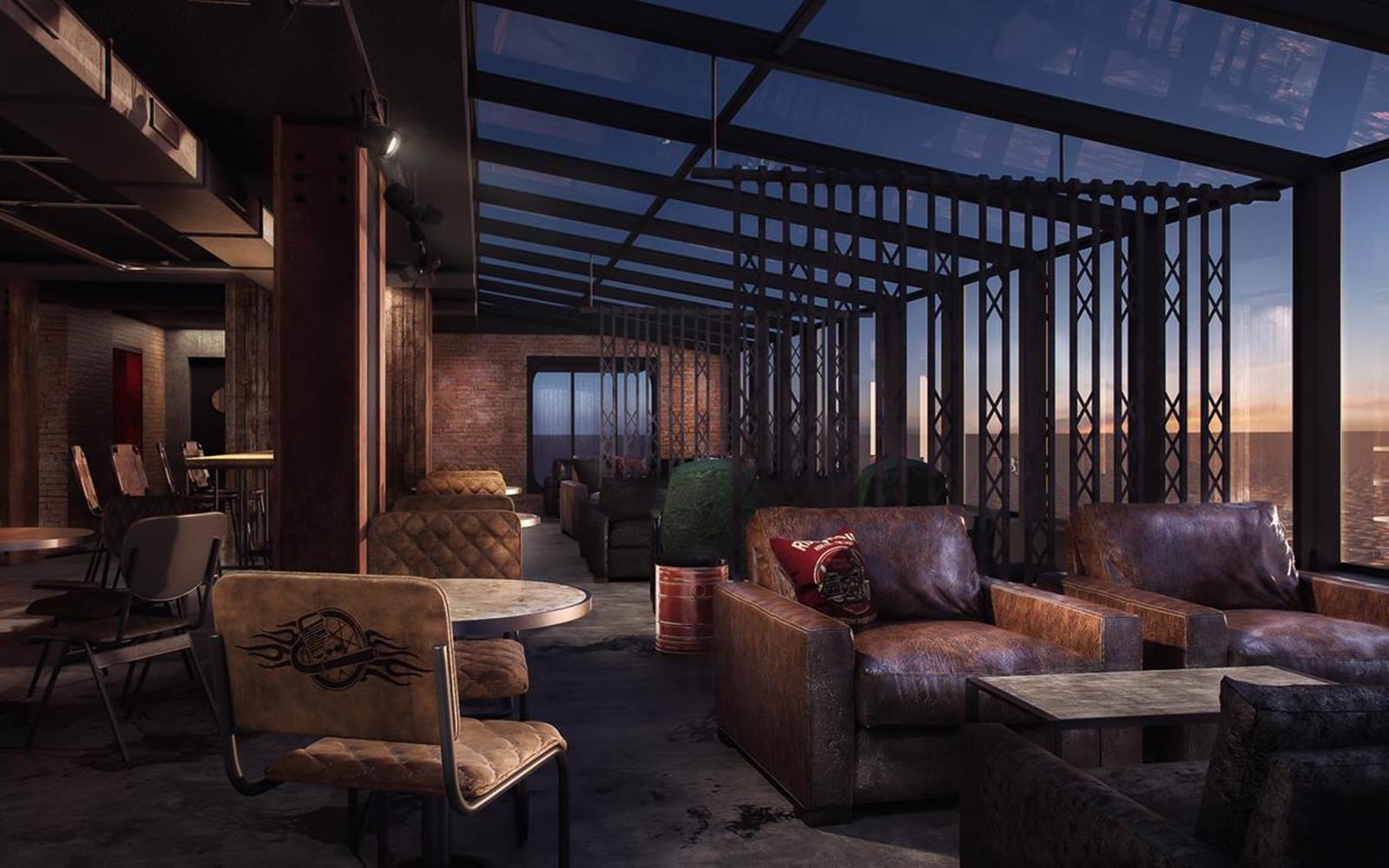 The District Brew House has 24 beers on tap, 50 bottled beers and favorites from Miami’s Wynwood Brewing Company. Another is The Cellars, a Michael Mondavi Family Wine Bar, with its curated wine list of over 35 different varietals. Vibe Beach Club, an adults-only lounge with private sun deck, has been expanded to a two-story venue. Guests can also enjoy Sugarcane Mojito Bar, Skyline Bar, Mixx Bar, Maltings Whiskey Bar and The A-list Bar. 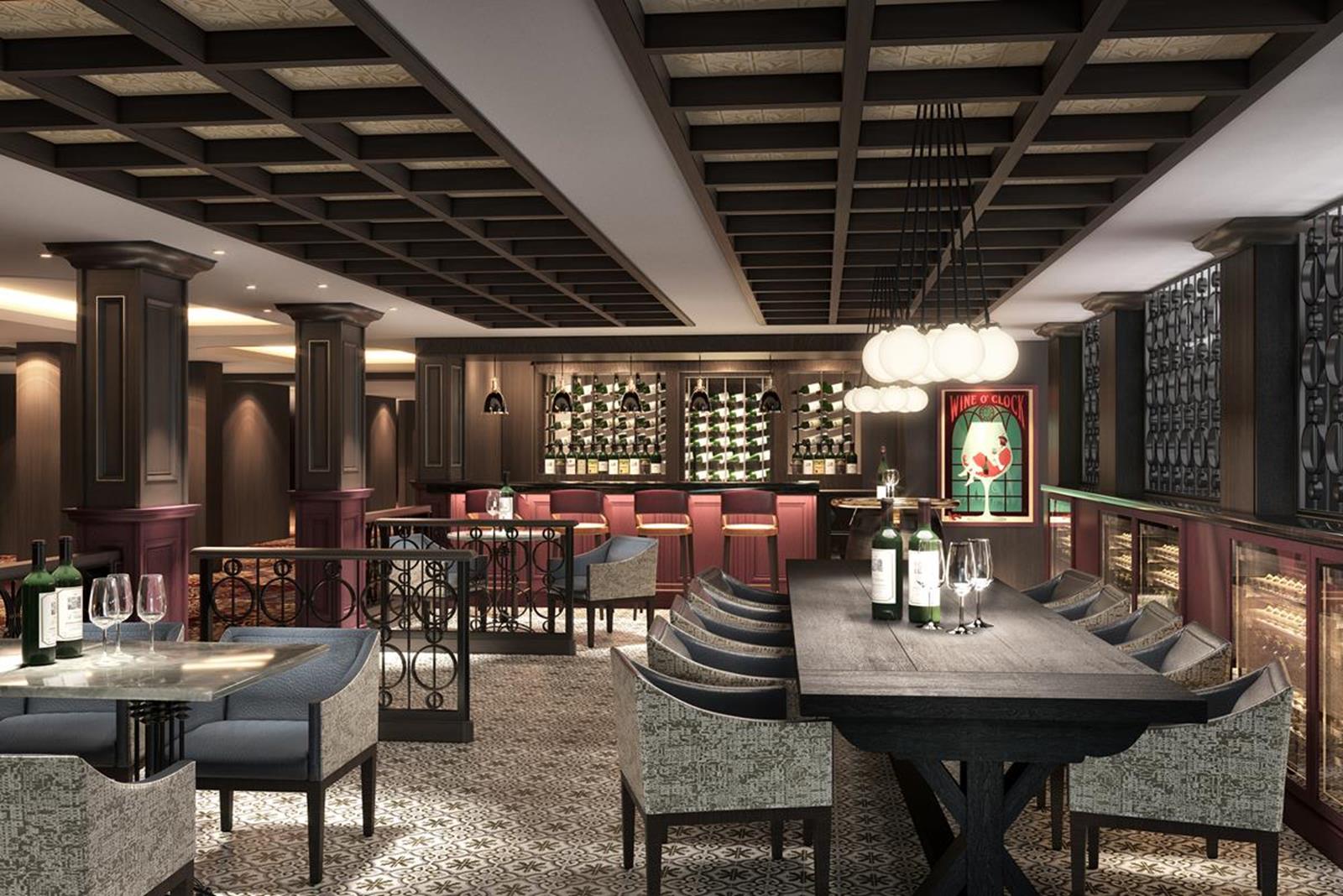 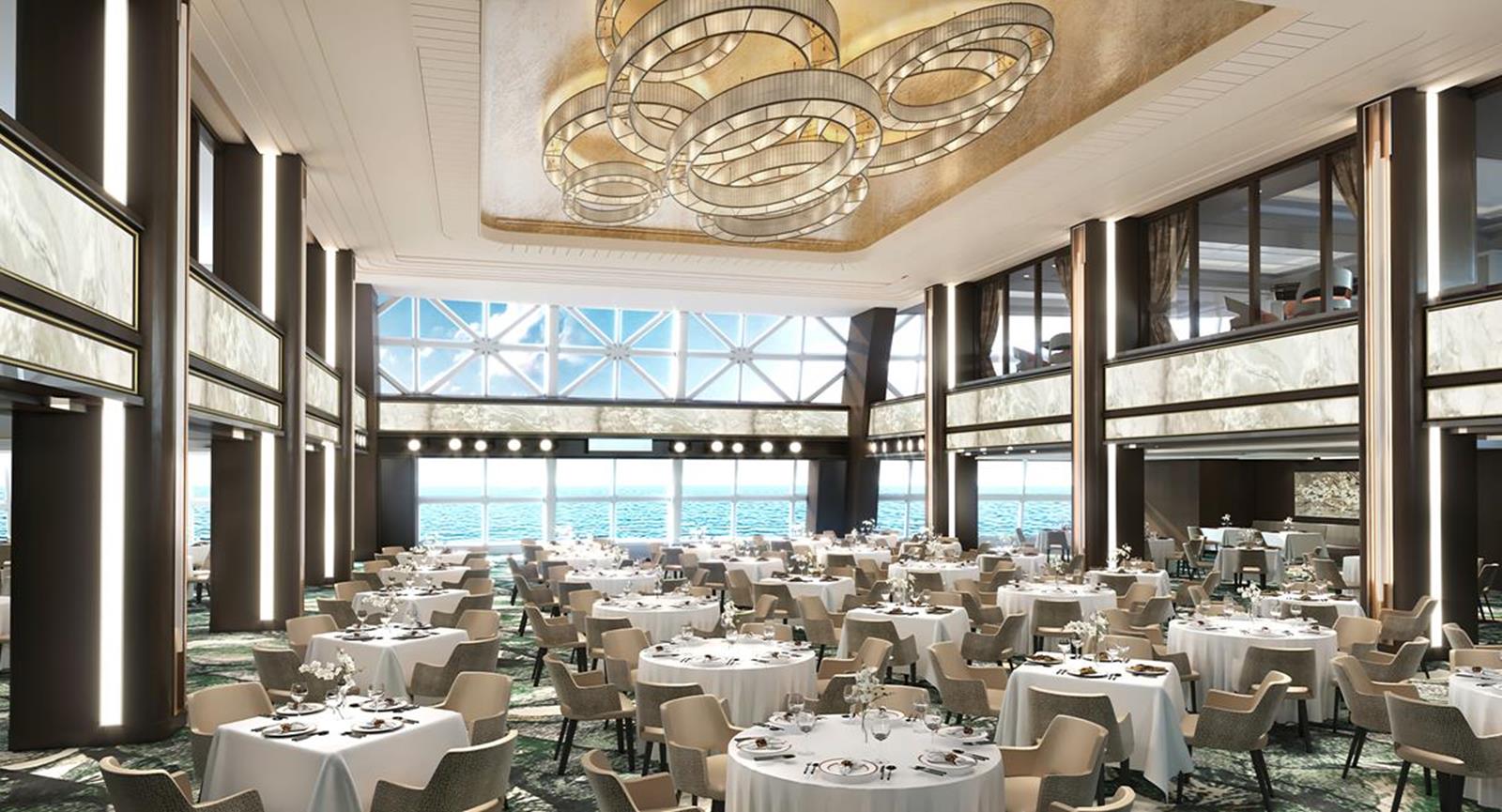 Norwegian’s 16 contemporary ships give guests the flexibility and freedom to design their ideal cruise vacation, with no assigned dining times and no formal dress codes. Guests enjoy a variety of award-winning entertainment and dining options, plus wide range of accommodations, including solo traveler staterooms and The Haven by Norwegian®.

And with the Norwegian Encore’s debut in November 2019, the line brings even more options for your group.

By Cindy Bertram
Cindy has 15+ years of cruise industry expertise in marketing, content creation, sales and training as well as social media. Her MBA from Loyola University Chicago complements her high creative edge and liberal arts BA. She can be reached at cindy@ptmgroups.com.