Tucked in the southeastern corner of New Mexico and hidden deep underground lie Carlsbad Caverns. A part of the Guadalupe Mountains range, this New Mexican natural wonder boasts over 117 known limestone caves. Although a summer fire burned nearby landscape, the caves remained unscathed.

Visitors have the option of self-guided or guided tours to take full advantage of all the cave has to offer. A general admission ticket includes access to two self-guided trails: the Natural Entrance Trail and the Big Room Trail. The Natural Entrance Trail is recommended for healthy individuals as the descent into the caverns is equal to 75 stories. 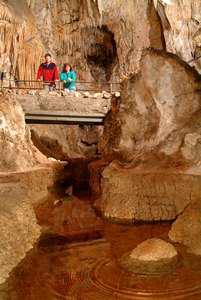 Don’t let steep pathways discourage you from exploring the wonders of the Carlsbad Caverns, though. Early excavators were lowered into the caverns by bucket, but today the caverns have an elevator system to take you to the Big Room.

There’s plenty to see above ground as well. Keep a lookout for over 300 different species of birds in Rattlesnakes Spring, an area of the park that attracts bird watchers from all parts of the world. The park is also home to over 67 mammal species, including a Bat Cave in the caverns.

Once you’ve finished touring the caverns, you’ll find an abundance of things for your group to do and see around or near Carlsbad. The free Carlsbad Museum and Art Center has artifacts and exhibits on Carlsbad and the American Southwest. Atop the Ocotillo Hills is Living Desert Zoo and Gardens State Park, which displays some 40 native animal species and hundreds of succulents from around the world. Located just north of Carlsbad in Artesia is the Cottonwood Winery, another group favorite. (www.carlsbadchamber.com)