A visit to Chicago’s newest museum has reminded me how much radio and television have touched my life and shaped our culture. 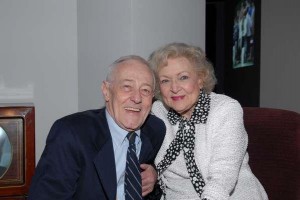 For me, touring the Museum of Broadcast Communications was a trip down memory lane, fueling flashbacks from my childhood with memorabilia from Chicago kids’ shows and classic comedies from the Golden Age of Television. But there’s a lot that will appeal to younger visitors and those who didn’t grow up in the Chicago TV market.

The Museum of Broadcast Communications had its grand reopening in June with TV icons Betty White, Hugh Downs and John Mahoney in town for the festivities. The museum’s new home at 360 N. State St. is five times larger than its former space at the Chicago Cultural Center. That location closed its doors in 2003.

Though visitors will spend most of their time in the TV gallery on the third floor, they will likely start their tour in the second-floor National Radio Hall of Fame Gallery, which showcases 173 inductees from all over the country. Photo plaques honor each inductee, and touchscreens provide information on radio’s greatest personalities, from Jack Benny and Kate Smith to Bob Hope and Bing Crosby. Honored programs include Burns and Allen, The Grand Ole Opry, Amos ’n Andy and The Lone Ranger.

Among the radio newsmen and commentators enshrined are Lowell Thomas, Edward R. Murrow, Larry King, Rush Limbaugh and Don Imus. Even President Franklin D. Roosevelt, famed for his “Fireside Chats,” is an inductee, as is Ronald Reagan, a sports announcer for Iowa stations in the early 1930s. Other sports broadcasters include Mel Allen, Vin Scully, Bob Uecker, Jack Brickhouse and Harry Caray. 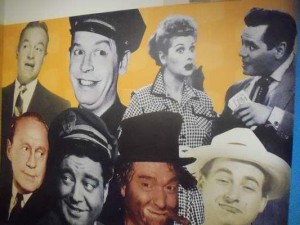 An original Charlie McCarthy and other dummies created by famed ventriloquist Edgar Bergen, along with old radios and boomboxes, are on display.

Also in the radio gallery is a video message from NBC news anchor Brian Williams that introduces the museum, with the promise of serving up “nothing less than a history of television in America.”

The television gallery covers nine genres, from game shows to news. Each section features video clips from the past and easy-to-read text on walls with oversized black-and-white photos of iconic performers. Sprinkled around the room are vintage TV sets.

The comedy display, sponsored by TV Land, spotlights the pioneers who made us laugh, including Lucille Ball, Red Skelton, Milton Berle and Jackie Gleason. The Reality Cove screening room presents shows like Survivor and Candid Camera, one of the genre’s first.

A montage of old game shows—such as Beat the Clock and The Price is Right (which debuted in 1956)—is fun to watch just for commercials for products like Geritol, Clairol, Wisk and DeSoto cars. Quiz show scandals of the ’50s are chronicled in this exhibit.

Many visitors will gravitate to the talk show exhibit and perhaps catch footage of Bette Davis or Katharine Hepburn being interviewed by Dick Cavett. Stars like Oprah, Phil Donahue, Jerry Springer and Dr. Phil are among the talkers recognized, as are David Letterman, The Tonight Show and long-ago shows hosted by Merv Griffin and Mike Douglas. You’ll also see clips from today’s mock news shows hosted by Jon Stewart and Stephen Colbert. (Greeting guests in the museum’s main lobby is the door from Oprah Winfrey’s talk show set, through which Oprah and guest stars entered the stage to cheering audiences at her Chicago studio.) 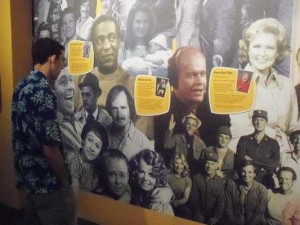 The TV news exhibit is anchored by the Meet the Press set from the Tim Russert era. A display on the first televised presidential debate includes a camera from that 1960 Nixon-Kennedy confrontation in a CBS studio in Chicago. A mini-theater shows news footage of three national tragedies—the Kennedy assassination, 1986 Challenger space disaster and Sept. 11, 2001 terrorist attacks.

Other areas of the museum focus on drama, music-variety, sports and children’s shows. A content-heavy touchscreen lets visitors peruse the 24 most popular dramas of all time. A variety show video has clips from performances on The Ed Sullivan Show and shows hosted by stars like Dinah Shore, Perry Como and Dean Martin.

Exhibits on local children’s shows like Bozo’s Circus, Garfield Goose, Family Classics and The Ray Rayner Show will rekindle fond memories for Chicago-area visitors of a certain age, but nationally televised shows like the Mickey Mouse Club, Howdy Doody, Mr. Rogers’ Neighborhood and Sesame Street also are featured. The Bozo show, which ran from 1960 to 2001 on WGN-TV, was the most successful local children’s show in history—studio audience tickets were sent out eight years in advance.

Besides reading about and viewing old TV shows, museum visitors can try their hand at anchoring an ABC-7 newscast in a studio setting.

Fans of TV and movies also may want to take the “Chicago Film Tour,” a bus tour that departs a few blocks from the Museum of Broadcast Communications. I’m not the world’s biggest movie fan, but I enjoyed sitting back and being entertained by movie clips and tour guide patter for about two hours. It’s a fun, effortless way to learn about Chicago and reminisce about favorite movies filmed there.

The 30-mile bus tour through downtown and many neighborhoods doesn’t make stops but does slow down as it passes restaurants, music clubs, train stations, cemeteries, theaters, banks and other spots that earned a few minutes of celluloid fame. Before and after the point of interest, related movie clips appear on small video screens scattered throughout the bus.

As we passed Wrigley Field, for example, we viewed scenes from Ferris Bueller’s Day Off (1986) and A League of Their Own (1992). Our guide, Patrick McDonald, a film critic for HollywoodChicago.com, also mentioned other movies filmed at the ballpark.

Patrick pointed out filming locations for recent movies like Public Enemies (2009) and Little Fockers (2010) and such classics as Alfred Hitchcock’s North by Northwest (1959), starring Cary Grant and Eva Marie Saint. Each passenger gets a handout that lists 86 movies and 36 locations.

The tour meets at the Rock and Roll McDonald’s at Clark and Ontario streets, just across from Rainforest Cafe and Hard Rock Cafe. (312-593-4455, chicagofilmtour.com)