New Air Service Makes a Branson Getaway Easier Than Ever

To many Baby Boomers like me, Branson is all about nostalgia. Theater shows featuring TV stars from long ago bring back memories of a more innocent time. It’s fun to see celebrities of yesteryear performing in intimate settings—and to get an autograph at intermission or after the show.

Branson, of course, is also a great venue for country music, the genre that put the little Missouri town on the national stage.

But the fast-growing Ozarks town of 10,250, in order to keep people coming back, is continually evolving. Every year brings a new slate of entertainment options, shops, attractions and services designed to draw repeat visitors and reach new audiences.

Travelers from Chicago and Houston certainly have a new incentive to visit Branson, thanks to daily nonstop service that AirTran Airways started in April. 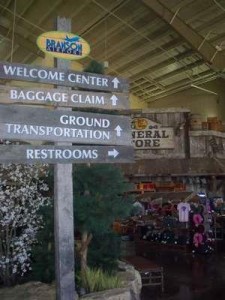 I’m just back from a Branson weekend getaway that wouldn’t have been possible on a car trip. All I had to do was drive for 35 minutes to Chicago’s Midway Airport and hop on a jet; in just over an hour I was deplaning at the Branson Airport, the country’s first privately developed and operated commercial airport. Previous to its opening in May 2009, the best option for air travelers was flying into Springfield, about an hour’s drive from Branson.

Greeting arriving passengers at the Branson Airport is a “Welcome to the Ozarks” sign. On the inside waits a warm welcome in the form of a rustic Ozarks village complete with waterfall, mill wheel, trickling stream and chunks of limestone. There’s a pond flanked by fake pines and dogwoods, plus machines that dispense pellets for feeding the fish. Best of all, the airport restaurant is a Famous Dave’s barbecue joint, the newsstand a Bass Pro Shops General Store. Weathered boards, vintage signs and mounted deer heads accent the down-home decor.

When it was time to fly home, going through security was a breeze. There was no wait, so we had time for some brisket and chopped pork at Famous Dave’s, relaxing at a patio table next to the stream. Our perch overlooked the waiting room’s padded, log-framed chairs and four boarding gates. What a stress-free experience! 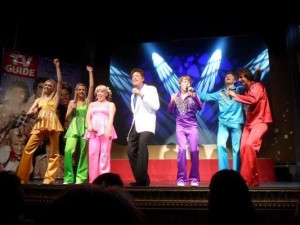 Barry Williams in Lunch With the Brady Bunch

Perhaps the most fun, though, was Lunch with the Brady Bunch, a show starring Barry Williams, the actor who played teenager Greg Brady on the iconic 1970s TV comedy The Brady Bunch.

Building on a successful trial run last year, Williams has crafted a brand new production that runs this season through Dec. 8 at the Yakov Smirnoff Theatre. Mixing reminiscences and film clips of his TV family with musical numbers performed by Williams and his cast of six young singer-dancers (each representing a Brady Bunch character), the fast-paced show celebrates what Branson best exemplifies—traditional family values.

In a segment about America’s hometowns, Williams tells how comfortable he is in Branson and takes us on an aerial trip over the Ozarks community he now calls home. Other segments show home movies of his son Brandon, now nine years old; he also has a four-month-old daughter, Samantha Rose. I liked the tribute to his parents toward the end of the show, especially his rendition of Reba McIntire’s “The Greatest Man I Never Knew,” a song that recalled the relationship his with his emotionally distant father, a military man.

After Williams played big brother Greg from 1969 to 1974, the child star went on to appear in other TV shows, movies and more than 85 Broadway musicals. Many fans are surprised to learn of his musical comedy career. I was impressed with his booming voice. Among the show tunes he sang: “76 Trombones” from The Music Man, “When You’re a Jet” (West Side Story) and “Luck Be a Lady” (Guys and Dolls). I especially liked the title song from Oklahoma.

Williams is warm, engaging and obviously enjoys being on stage and connecting with fans. One of my favorite segments was a kitchen table conversation with the six “Brady kids” as he describes the career path each young actor followed after The Brady Bunch days. Going back in time, he reveals off-screen moments traveling with the Brady Bunch cast in locations like Hawaii and London.

The youngsters takes the spotlight when they bring back songs from two other famous family groups who appeared on TV in the ’70s—The Partridge Family and Jackson Five.

At one point Williams takes questions from the audience:

“Would you consider being a contestant on Dancing with the Stars?” (yes, during the winter break in Branson).

“What was your favorite Brady Bunch episode?” (the one where he got to surf in Hawaii).

One questioner asked about Brady Bunch actress Ann B. Davis (the family’s nanny is 86, a born-again Christian and doing well in San Antonio).

Lunch (chicken, pulled pork, corn muffin, corn on the cob and Southern-style beans) is served during the show; each seat has a tray table. Strawberry shortcake is passed out at intermission.

Williams and his gang (ages 12-26) appear in the lobby afterwards to chat, sign autographs and pose for pictures. The gift shop sells a Brady Bunch calendar, cookie jar, DVDs of old shows and Williams’ book Growing Up Brady—I Was a Teenage Greg. 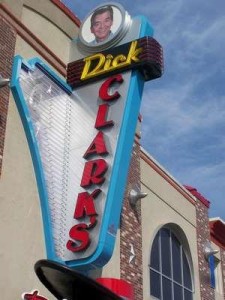 The performers in Legends in Concert at Dick Clark’s American Bandstand Theater are not real-life celebrities but impersonate them to a “T” in a two-hour tribute show. Dean Z, as Elvis Presley in a tight black leather suit, is phenomenal. I also saw Michael Jackson, Faith Hill, Tim McGraw and Blues Brothers look-alikes. Joining Elvis and the Blues Brothers this fall will be Liberace, George Strait, and Aretha Franklin or Whitney Houston impersonators. (The theater had its roof ripped off by the Feb. 29 tornado that tore through Branson but was back in business six weeks later after a heroic reconstruction project.)

The 700-passenger Branson Belle paddlewheeler, the largest ship ever built on a land-locked lake, offers a first-rate dinner show package that includes deck time to enjoy the scenic shoreline of manmade Table Rock Lake. One performer absolutely wowed me—violinist Janice Martin, a native of Racine, Wis. She also is an aerialist and in her finale plays the instrument while dangling upside down, wrapped in strips of cloth flowing from the ceiling. She said her Army basic training at Missouri’s Fort Leonard Wood prepared her for the circus-like act. The musical training she got at New York’s famed Juilliard School. In addition, the multi-talented Martin played movie themes on the piano and sang gospel. Belting out “The Battle Hymn of the Republic,” she was part of the show’s stirring patriotic tribute, the best one we saw in Branson. 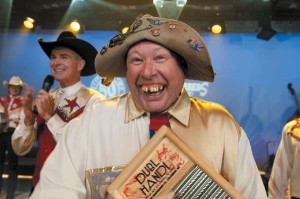 The Baldknobbers, a group founded by the four Mabe brothers in 1959, is a Branson institution known for its country music and cornpone comedy. Recognized for their contributions to American music, the Mabes recently donated artifacts to the Smithsonian’s National Museum of American History—footage of the ceremony in Washington is shown on the theater’s two giant video screens. Producer Tim Mabe plays Droopy Drawers Jr., the hillbilly half-wit with bad teeth, and wife Patty is a featured vocalist, as is son Brandon. I especially liked the comedy routines with Droopy Drawers and Jerl “Hargus Marcel” Adams, another country funny man that kept us in stitches.