Missouri with a French Accent 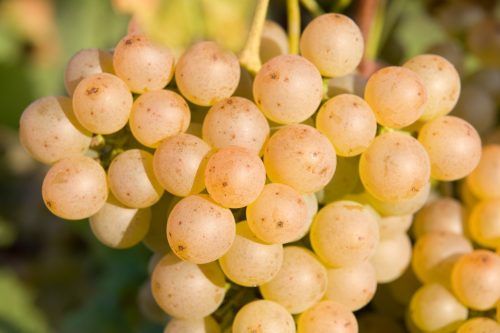 Cute, charming, quaint. Hidden gem. Oozing with character. They’re clichés that usually make me cringe, and I try to avoid them. But all fit Ste. Genevieve. It’s just that kind of place.

Those overused descriptions came to mind as I walked the narrow streets of Missouri’s oldest town, a place that I had always heard about but never visited, even though I was in the general neighborhood on several occasions. I’d been aware of its claim as the oldest European settlement west of the Mississippi and pictured it being right on the banks of Ol’ Man River. Well, the town was waterside at one time, until a devastating 1785 flood forced residents to move to higher ground two miles away.

Ste. Genevieve’s earliest inhabitants were French-Canadians who in the 1740s settled a region known as Illinois Country, part of a vast territory held by France. Though Spain acquired the territory in 1762 and Americans of English and other descents moved in after the Louisiana Purchase of 1803, the town kept much of its French character. Many Germans arrived in the mid-19th century, and they also contributed to the cultural fabric, as did the famous art colony that flourished here in the 1930s. Ste. Genevieve celebrates its heritage with several themed festivals throughout the year, including Jour de Fete in August, the French Festival in June and Rural Heritage Days in October. 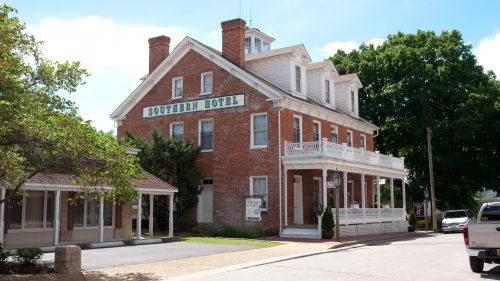 Several buildings from the French colonial era, with their fenced-in gardens, wide porches, steeply pitched roofs and walls of vertical, hand-hewn logs, are reminiscent of those found in Quebec, Normandy and Louisiana. The Louis Bolduc House, built in 1792 by one of the richest men in Ste. Genevieve, is one of the best preserved such houses in the nation and a group-tour staple. Also on the circuit is the 1792 Bauvais-Amoureux House, 1806 Jacques Guibourd House and 1818 Felix Valle House State Historic Site, the latter a limestone building featuring an authentically stocked mercantile store and the owner’s living quarters. The Ste. Genevieve Museum provides another window onto local history. Many groups visit Ste. Genevieve Catholic Church, an imposing red-brick building dedicated in 1880 and surprisingly large for such a small town; church tours can be arranged. All these historical sites are within easy walking distance of each other.

The best place to start your group’s day is the Ste. Genevieve Welcome Center, operated by the town’s tourism department. Exhibits and a 10-minute video shed light on the town’s history. For groups larger than 15, the center can arrange a discount rate for admission into the historic homes. It also can furnish costumed guides, arrange outings to nearby wineries, and schedule special performances by the French carolers and French militia.

For accommodations, Ste. Genevieve has the 48-room Microtel Inns & Suites on the outskirts of town. Smaller groups might consider splitting up among the historic district’s bed-and-breakfast inns. The graciously restored Southern Hotel, the largest B&B, offers eight rooms appointed with Victorian antiques. Built as a hotel in 1805, it was renowned for its fine food, gambling rooms and pool hall. The Inn St. Gemme Beauvais also has eight rooms, plus a private cottage; its candle-lit restaurant on Fridays and Saturdays offers a classic French dinner open to the public. 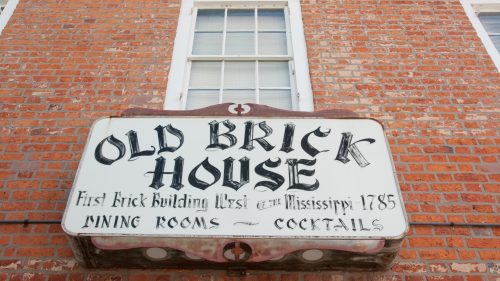 Other group-friendly restaurants include the Genevieve Cafe, located outside the downtown historic district; Audubon’s of Ste. Genevieve, opening this spring in a former hotel; and two venerable places on the courthouse square—The Anvil Saloon and Historic Old Brick House. The latter claims to be the oldest brick building (1785) west of the Mississippi. Both the Old Brick House and Anvil Saloon offer buffet options for groups and are known for their fried chicken. One local specialty on their menus is liver dumplings, a German-inspired side dish much like the noodle-like spaetzle. The Anvil Saloon, with high ceilings, exposed brick walls, vintage photos and original maple floor, boasts an exquisitely carved maple bar that has been in place since 1855, when a steamboat struck a local sandbar and needed to unload some of its weight. The apple and peach crumb pie are both loaded with big chunks of streusel. An upstairs room can seat groups up to 60. Other downtown dining options are Sirro’s, Stella and Me Lunch Cafe and Station 2 Cafe.

For visions of Mark Twain, have your bus drive down to the ferry landing, where you might see the boat that takes passengers, cars and even motorcoaches across the Mississippi to Illinois. The nearest bridge is a half hour’s drive at Chester, Ill. Magnolia Hollow Conservation Area, 10 miles north of Ste. Genevieve, offers the best river lookout point.

Also outside of town, in the rolling hills of Ste. Genevieve County, await several wineries that offer tours and tastings. Chaumette Vineyards & Winery, more like a wine resort, commands a stunning setting with views of the vineyards and Ozark foothills. It has a restaurant, spa, gift shop/art gallery, wedding chapel and villa accommodations. Crown Valley Winery and Weingarten Vineyard also can handle large groups. In downtown Ste. Genevieve, wine enthusiasts pursue their passion at Ste. Genevieve Winery and the Show-Me Shop, a gourmet foods store with Missouri-made wines, cheeses and sausages.

To round out a Ste. Genevieve itinerary, groups might consider a tour at Crown Ridge Tiger Sanctuary, a rescue facility for exotic cats that have endured neglect or abuse. A permanent home to five tigers and a lioness, it offers 40-minute general tours and longer specialized tours.