Throughout 2017 Mississippi has been celebrating its 200th anniversary of statehood with numerous events honoring its people, music, food, agriculture, and contributions to science, literature and art. The capstone of the year is the December 9, 2017 opening of two new museums—the Museum of Mississippi History and Mississippi Civil Rights Museum. They are located on a shared campus in Jackson, the capital city. 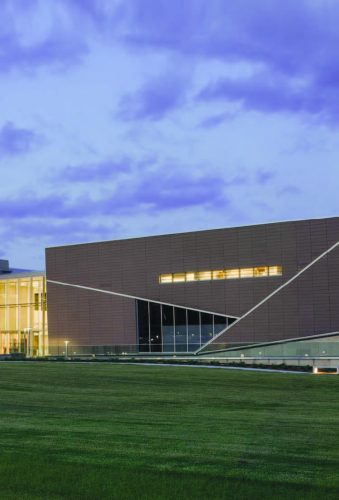 Nine galleries encourage visitors to discover Mississippi’s rich past. Start with the First Peoples Gallery, which explores the Indian mounds that are on the state’s landscape even today. The story on the origins of the native Choctaw and Chickasaw people is shared.

The Cultural Crossroads Gallery looks at the arrival of Europeans and Africans. Dramatic artifacts, including iron slave shackles, showcase this period.

The United States Gallery covers the clashes that occurred as Mississippi transitioned from a territory to statehood on December 10, 2017. Examine the federal laws forcing native peoples to leave their ancestral homelands.

Early in the Cotton Kingdom period there were more enslaved African-Americans than whites in Mississippi. Visitors peer into the lives of an enslaved family, farmers and a wealthy plantation owner.

Freedom, Reconstruction and Regression are featured in the World Remade Gallery. View the challenges faced by farmers in an unfair sharecropping system. A state torn by the Civil War faced numerous challenges in Reconstruction.

Progressivism, repression and World War I all contributed to the years portrayed in the Promise and Peril Gallery. Positive inventions improved the way some lived, but flooding and that pesky boll weevil challenged many Mississippians.

The time frame that covers the Bridging Hardship Gallery explores the Great Depression, New Deal and World War II. People went back to work with New Deal programs, and more than 10 percent of the state’s population signed up for military service.

Civil Rights, Diversification and Innovation are addressed in the Forging Ahead Gallery, which covers the period from 1946 to the present. Activists, artisans, businessmen, politicians and everyday citizens impacted Mississippi’s story as the social landscape of the state changed. (mmh.mdah.ms.gov)

This museum advances an understanding of the Mississippi civil rights movement and changes it brought to the nation. Eight galleries focus on the years 1945-1976 and encircle a central space called This Little Light of Mine.

The gallery on Mississippi’s Freedom Struggle is an introduction to civil and human rights violations and the need for a civil rights movement. The inhumanity of slavery and the people affected are presented.

The Mississippi in Black and White gallery covers 1865-1941. Blacks emerge from slavery and establish communities with strong bonds to church and family. A “colored” entrance sign and monoliths engraved with the names of five known lynching victims are stunning exhibits.

The central gallery, This Little Light of Mine, is filled with natural light. Civil rights activists are honored. The music of the move-ment comes from a dramatic light sculpture, and as more visitors gather the light shines brighter and the music grows.

A Closed Society explores 1941-1960 and shares experiences of black Mississippians who returned from WWII and helped fuel the civil rights movement. Two theaters show how Brown v. Board of Education and Emmett Till’s murder sparked the civil rights movement. A Tremor in the Iceberg draws its name from activist Bob Moses, who described those times as the “tremor in the middle of the iceberg.”

The critical importance of 1963 and 1964 are studied in the I Question America gallery. Local gatherings in churches and community centers grew into state organizations and influenced the Democratic National Conven-tion, where they demanded their voices be heard. Hear the compelling story of Freedom Summer and experience significant events through interactive touch screen displays.

The Black Empowerment gallery explores what was happening in the black community from 1965 to the mid-1970s. It shares the successes black citizens enjoyed, such as the Voting Rights Act of 1965, and tragedies like the murder of Vernon F. Dahmer, Sr.

In Where Do We Go From Here, take a moment to reflect and read the words of Mississippians as they discuss progress made and challenges remaining.
(mcrm.mdah.ms.gov)

Both museums offer a group discount for parties of 10 or more, and a dual-admission price is also available. There are special rates for school and educational groups. Educational resources are available on the Educators page of each website.