This may have been the year of “Super-Gras” in New Orleans (owing to the “perfect storm” of simultaneous Super Bowl and Mardi Gras celebrations in a 10-day stretch), but a mere 90 minutes to the East, the communities of the Mississippi Gulf Coast proved they can match The Big Easy parade for parade when it comes to Carnival season revelry. 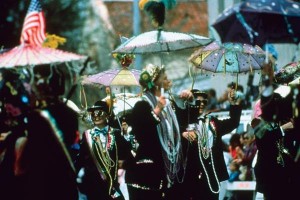 For the 105th year (save occasional war-time interruptions), Carnival on the Coast and its 23 associated parades keep the Gulf happily in the grip of a tradition so strong, not even Hurricane Katrina’s devastation in 2005 could stop it. Even then, less than six months after Mother Nature very nearly wiped the region off the map, each community found a way to celebrate by holding smaller versions of their traditional parades. Today, more than a century after the first parade rolled with a mere 17 floats, the annual pageantry has grown to Jackson County’s four parades, Hancock County’s five and Harrison County’s 14, collectively attracting nearly a half-million visitors on the weekends leading up to Mardi Gras.

The Mississippi Gulf Coast Visitors Association finds Fat Tuesday festivities the perfect backdrop to showcase the region’s rise from disaster. And what a metamorphosis it has been! In recent years, the media have been invited to come share the fun and see first-hand the area’s ongoing transformation. Following The Storm (as locals refer to Katrina),the vast majority of Beach Boulevard’s grand and majestic antebellum homes, hotels and businesses were leveled in the nearly 40-foot storm surge, leaving miles of barren beachfront real estate. But, today, visitors are treated to an impressive renaissance. From a gleaming new Visitors Center adjacent to the iconic Biloxi Lighthouse to the addition of Jimmy Buffet’s Margaritaville Restaurant and Casino near Biloxi’s Back Bay to the string of glittering gaming palaces that dot the beachscape, the Gulf Coast area has managed to recreate itself anew while holding tightly to time-honored traditions.

So, as Carnival on the Coast continues to grow, long-held observances like the Coronation Ball take center stage with homage paid to a Mardi Gras King, Queen and their court. Fat Tuesday dawns with countless elaborately-decorated floats lining Biloxi’s Main Street as the Gulf Coast Carnival Association Parade rolls past throngs of revelers representing locals, families, tour groups, young and old, all in enthusiastic pursuit of beads and other trinkets being thrown from the floats. The mood is light-hearted and decidedly family-friendly. 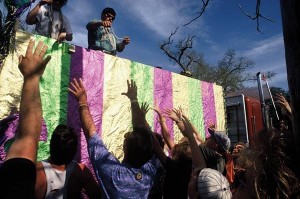 A Gulf Coast group getaway in the midst of Mardi Gras merriment is not only do-able, but encouraged. On either side of parade day, groups can enjoy not only a wealth of dining options and attractions galore, but take advantage of a hefty dose of culture in many forms.

The Biloxi Visitors Center is a 25,000-square-foot facility that qualifies for “must-do first-stop” status on any group itinerary. Equal parts information clearinghouse and local history museum (complete with a gift shop!), the Visitors Center definitely qualifies as an attraction.

Another must-see is the impressive array of art and artifacts exhibited by the recently-expanded Ohr-O’Keefe Museum in Biloxi. A Smithsonian affiliate, the museum features the ceramics of George E. Ohr (1857-1918), the self-proclaimed “Mad Potter of Biloxi,” as well as contemporary and historic exhibitions. In nearby Ocean Springs, the Walter Anderson Museum of Art is dedicated to the celebration of the works of Walter Inglis Anderson, one of the foremost American painters of the 20th century. In addition, the works of his brothers, Peter Anderson, master potter and founder of Shearwater Pottery, and James McConnell Anderson, noted painter and ceramicist, are also on display.

Shopping reigns supreme, whether in the form of unique boutiques in Ocean Springs to the east and Bay St. Louis to the west or the shop-til-you drop bargain-hunting represented by Gulfport Premium Outlets. World-class golf is back in full swing and 26 miles of beach (including the world’s longest man-made stretch) has never been more pristine.

Also not to be missed are two unique entities created from the aftermath of Katrina. Located at Main Street and Highway 90 in Biloxi’s Town Green is a stirring memorial dedicated to the local victims who perished in the storm. Standing 12 feet tall, the memorial contains a tile inlay of a wave, a glass case containing various items from destroyed buildings, and the names of the 170 victims that perished during the storm. ABC’s “Extreme Makeover” crew created the site and dedicated the memorial on Feb. 15, 2006.

And, a driving tour along Highway 90 reveals at least 50 intricately-carved sculptures created from the trunks of live oak trees killed by Katrina’s surge. Created by a trio of chainsaw artists from Mississippi, Florida and Indiana who sought to preserve the remains of formerly grand live oaks, the dead tree trunks have been transformed into maritime-themed pieces of art. Particularly notable are the world’s largest eagle sculpture standing 17 feet tall in Pass Christian’s War Memorial Park on Highway 90 and, farther west in downtown Bay St. Louis, a pair of “Katrina Angels” carved from trees where storm survivors clung to branches awaiting help.