Lift Your Stein to Good Times at Hofbräuhaus Chicago 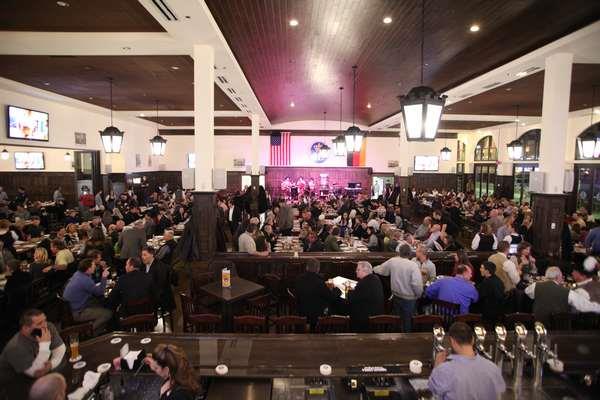 For anyone who likes pork, pretzels, potato salad and partying, all washed down with freshly brewed beer from old Bavarian recipes, the Hofbräuhaus is the place to celebrate in suburban Chicago.

The festive new restaurant offers up a genuine slice of the Old World in Rosemont, Ill., just a short hop from O’Hare International Airport. A beer hall in the German tradition, Hofbräuhaus Chicago is part of a new dining/entertainment complex called MB Financial Park, a magnet for fun-loving groups, complete with a hip bowling lounge, comedy club and multi-plex movie theater. Opening soon across the road will be Chicago Fashion Outlet Center, another lure for tour groups. 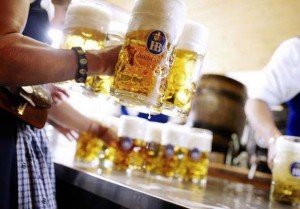 I have to admit a personal affinity for German food and culture and a particular affection for the original Hofbräuhaus in Munich. It was there, as part of a student group on my very first night in Europe, that I kicked back just hours after our charter flight from the States touched down. For those of us who can’t get back to Germany very often, it’s comforting to know we can find authentic Bavarian dishes close to home. Several Hofbräuhaus establishments have popped up across the country in recent years, the Rosemont location being the latest.

My group started by sharing the Jumbo Complete, a giant, warm, salted pretzel — golden brown on the outside, soft and chewy on the inside. They’re shipped frozen from Munich. Best of all, the pretzels come with irresistible sweet mustard, onion mustard and Obazda cheese dipping sauces, the latter a combination of cream cheese, brie, onion and butter. We ordered an extra dip — a creamy, pate-like spread called liver mousse. 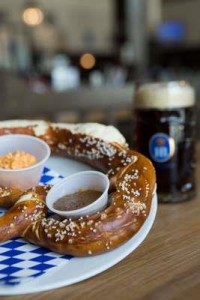 The giant pretzels are shipped frozen from Munich.

Of course, nothing goes with pretzels better than a frothy liter or half liter of beer, and there are four Hofbräuhaus brand choices, all micro-brewed on site. Guests can choose from a glass stein of HB Premium Lager, Light or Dunkel (dark) or a tall glass of the fragrant, faintly fruity Hefe Weizen.

At the direction of the entertainers on stage, you’ll have plenty of chances to shout “Prost!” as you lift your foamy mug to the rafters. They’ll even encourage you to stand on the wooden benches and sway to the music, glass or stein held high. Dancing in the aisles between the long communal tables is also allowed. It’s Oktoberfest every day!

Bands perform every night, and they’re all direct from Germany. The Las Vegas location is the only other Hofbräuhaus in America that imports its musical entertainment, according to Jim Olson, general manager of Hofbräuhaus Chicago. Local German bands take the stage at lunchtime.

Another attention getter: Patrons who down a shot of Jägermeister, a German spirit, get spanked soundly with a wooden paddle by the dirndl-clad waitress who serves the shot on the paddle fitted for six shot glasses. It’s all part of the beer hall frivolity.

The two cavernous rooms are decorated with photographs and prints of the original Hofbräuhaus in Munich. In warmer months, outdoor tables situated around the scalloped-gabled building provide a beer garden atmosphere. The restaurant can seat a total of 1,000, indoors and out. Buffets and other special accommodations can be arranged for groups. 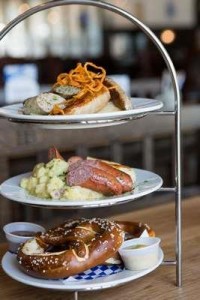 Complementing the beer is a variety of hearty German specialties, with sausage plates among the most popular. The “Hofbräuhaus Würstplatte” comes with two frankfurters (similar to our hot dogs) and pork and chicken sausages, served with imported sauerkraut, mashed potatoes and onion mustard. (The smooth, creamy sauerkraut comes from Germany and is not as sour or overpowering as the kind that Americans are used to.) Or choose the Münchner Weisswürste—the famous white sausages (veal and pork) from Munich. Side dishes range from bread and potato dumplings to red cabbage, applesauce, spätzle (a German noodle) and Bavarian potato salad.

The gift shop sells a wide selection of Hofbräuhaus (HB) logo items, from glass steins and “beer boots” to T-shirts, caps, aprons and music CDs. You can also pick up shot paddles, German mustard and chocolate, Hansel and Gretl salt and pepper shakers, and a book on the history of Munich’s Hofbräuhaus.