On Jan. 29, Kansas celebrated 150 years of statehood. It was that day in 1861 when Kansas entered the Union as the 34th state. By this time the territory had already been through the trials and tribulations of Bleeding Kansas, a course of violent incidents involving anti-slavery activists and pro-slavery advocates. At issue was whether Kansas would enter the Union as a free or slave state; the violence foreshadowed the Civil War.

Throughout 2011 Kansas will hold a myriad of sesquicentennial events to honor its statehood. In addition, the Sunflower State will remember its struggles and triumphs during the Civil War because 2011 also is the sesquicentennial of the start of the four-year conflict that ripped apart a nation. Following is just a sampling of historical sites and events that may enhance group itineraries: 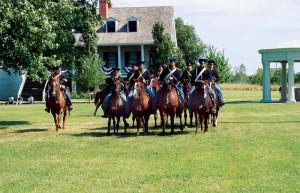 Civil War on the Western Frontier, Lawrence, Aug. 12-21: Every year Lawrence hosts Civil War on the Western Frontier, a series of events held around the anniversary of Quantrill’s Raid. On Aug. 21, 1863, as the conflict over slavery continued, Confederate guerrilla William Quantrill and his raiders attacked Lawrence, killing hundreds and destroying the city. After the raid, Lawrence residents came together to bury their dead and rebuild the city. This year, for 10 days in mid-August, Lawrence will again commemorate its Civil War history through presentations, lectures and exhibits throughout Lawrence and Douglas County. The Lawrence Visitor Center presents “Lawrence: Free State Fortress,” a 25-minute docudrama about Lawrence’s part in Bleeding Kansas and the Civil War.  There is also a wealth of information about touring area sites related to Quantrill’s Raid and John Brown. (785-865-4499, visitlawrence.com)