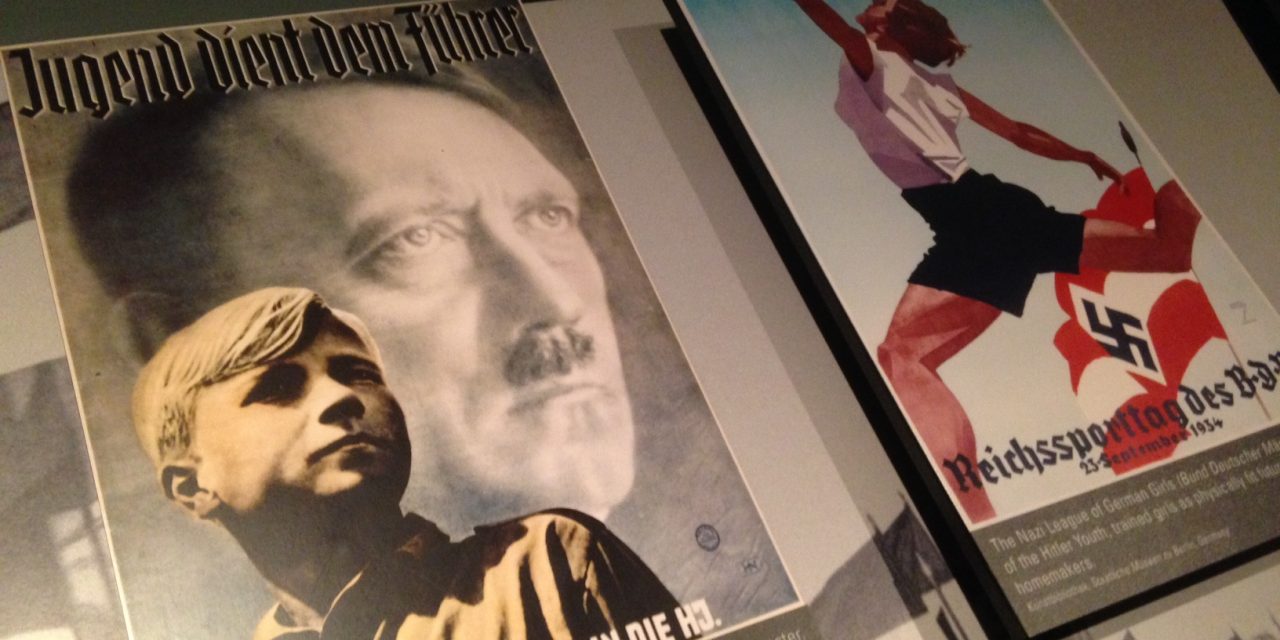 A special exhibition spotlights the 1936 Summer Olympic Games in Berlin and American medalists like Jessie Owens.

Because of the historical context in which they played out, they’ve been called the Nazi Olympics, or Hitler’s Olympics.

The 1936 Summer Olympic Games staged in Berlin took place at a critical time in the 20th century, just a few years before Nazi Germany’s invasion of neighboring countries and the subsequent outbreak of World War II.

This year, on the 80th anniversary year of the momentous Berlin event, the Illinois Holocaust Museum in Skokie, Illinois is presenting the special exhibition Nazi Olympics: Berlin 1936 through Aug. 28, 2016. On loan from the U.S. Holocaust Museum, the exhibition, with artifacts and black-and-white film footage, also coincides with the upcoming Summer Games in Rio de Janeiro and recent release of Race, a movie centered around speedster Jessie Owens, the American hero of the Berlin Olympics. 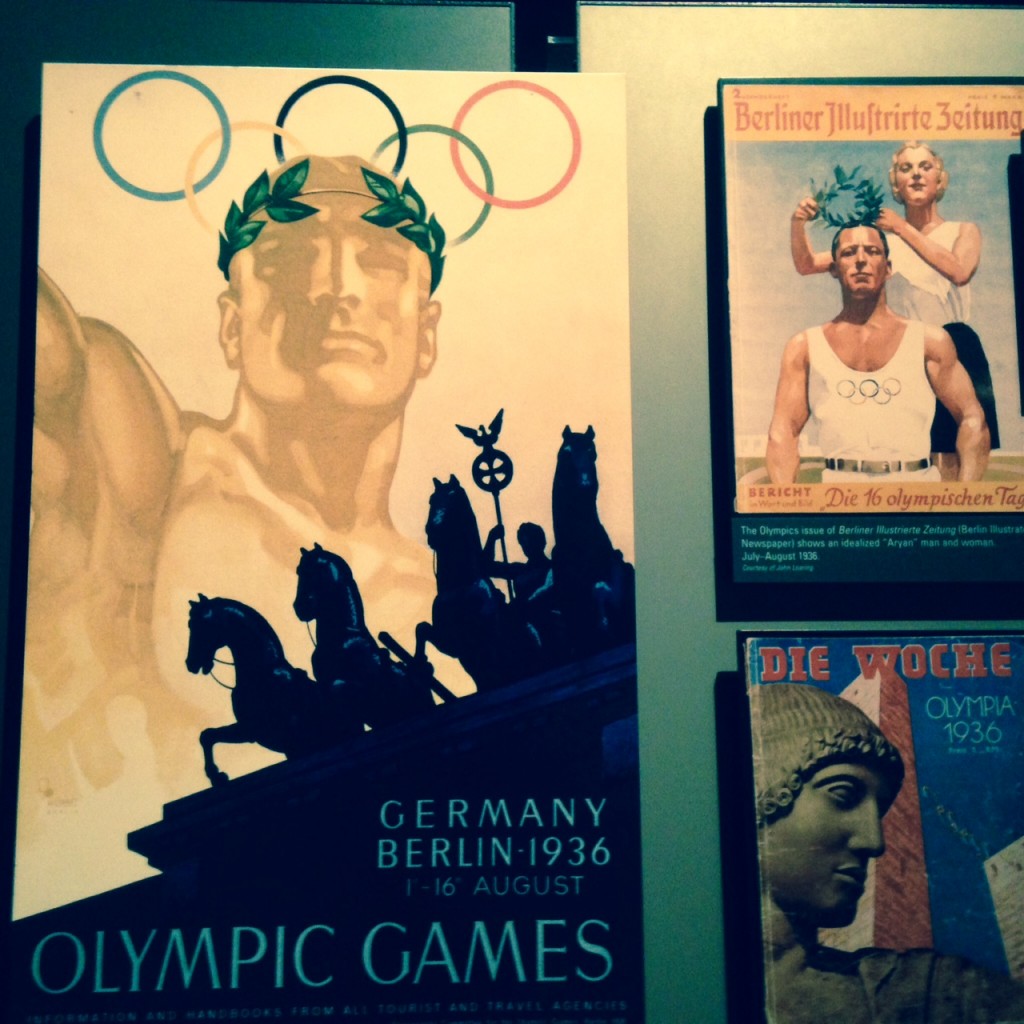 Posters and magazine covers promoting the Berlin Olympics are part of the exhibition. Credit Randy Mink

Nazi Olympics: Berlin 1936 starts by explaining political developments that led up to 1936, including the Nazification of sports in Germany. The government harnessed sport as a part of its drive to control its citizens, strengthen the “Aryan race” and prepare German youth for war, with schools using physical education for political indoctrination. Posters and magazine spreads on display, part of the propaganda, show the Germans as the rightful heirs of an “Aryan” culture of classical antiquity, with ideal racial traits of blue eyes, blond hair and finely chiseled features. Non-Aryans were excluded from sports associations and facilities; Jewish groups set up their own associations.

Joseph Goebbels, the Nazis’ infamous minister of propaganda, convinced a skeptical Adolph Hitler that the Olympics would be the perfect arena for showcasing modern Germany and the supremacy of the “master race.” And with their flair for staging elaborate ceremonies and rallies, the Nazis put on Olympic spectacles never before seen. They introduced the tradition of the grand opening ceremony with athletes from every country marching into the stadium and a lone runner bearing a torch carried by relay from the site of the original Olympic Games in Greece.

For the first time in the history of Games, though, many in Europe and the United States called for a boycott because of the human rights violations taking place in an increasingly militaristic Germany. The exhibition explores that controversy, prompting visitors to think about the social and moral issues involved in today’s sports. As portrayed in the movie Race, Avery Brundage (played by Jeremy Irons), president of the U.S. Olympic Committee, opposed a boycott, while Jeremiah Mahoney (William Hurt), head of the Amateur Athletic Union, was against going to Berlin, a move he saw as supporting the Hitler regime. Because 18 high-profile black athletes were bound for the Olympics (triple the number who went to the 1932 Games in Los Angeles), African-American newspapers generally favored U.S. participation. They counted on Owens and others to repudiate Nazi racial theories and inspire a struggling black community in Jim Crow America.

Videos show Hitler and pageantry inside the stadium, plus events in which Owens and other U.S. track stars competed. Blacks—all from predominately white universities—won 14 of the 56 medals awarded to the American team, with Owens snaring four golds. You learn that Mack Robinson, the younger brother of baseball’s trailblazing Jackie Robinson, took silver in the 200-meter dash.

But these black victories were belittled by Nazi newspapers and Goebbels, who exerted his influence over how the Olympics were covered in the German press. Wrote Goebbels in his diary in 1936: “We Germans won a gold medal, the Americans three, of which two were Negroes. White people should be ashamed of themselves. But that’s typical of a country devoid of culture.” 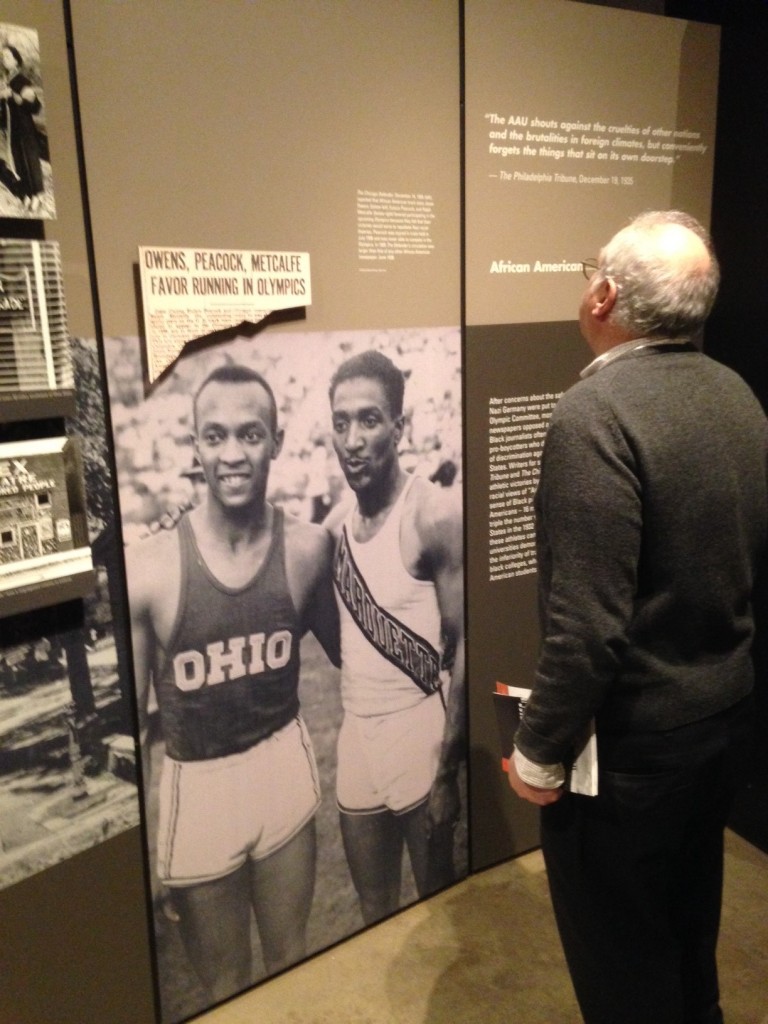 As the exhibition explains, controversies also revolved around Jewish athletes. Some of them boycotted the Games because of Hitler’s racial dogma. Germany’s token participant with Jewish blood was the half-Jewish Helene Mayer, a fencer who won a medal. Twelve Jews in all were medalists in 1936, six from Hungary. At the end of the exhibit you discover the plight of these Jewish competitors, most of whom ended up in concentration camps or imprisoned in ghettoes.

One display chronicles the controversy involving two Jewish runners, Marty Glickman and Sam Stoller, who were benched by their coach at the last minute. They were replaced in the 400-meter relay by Owens and another black track and field star, Ralph Metcalfe, who later became a U.S. congressman from Chicago. Questions lingered whether the Jews were pulled by American higher-ups to save Hitler embarrassment and whether the decision was motivated by anti-Semitism. A video shows Glickman discussing the episode years later. One of the scenes in Race also spotlights the incident.

In the end, the Berlin Olympics put a better face on Germany in the eyes of the world. In the Facade of Hospitality gallery, you learn that a city beautification program obscured sinister aspects of the Nazi regime, including the persecution of Jews and Gypsies and imprisonment of political enemies, as anti-Jewish signs were removed and Gypsies were swept off the street and put in internment camps.

A New York Times reporter wrote that the Games put Germany “back in the field of nations” and made the Germans “more human again.” (But just after the Olympics, the first major concentration camp, Sachsenhausen, was under construction only 18 miles from Berlin.)

After the success of the Olympics, in which Germany won the most medals (348 vs, 312 for the Americans), Hitler had grand plans for future Games, consulting with his favorite architect, Albert Speer, to build a stadium in Nuremburg that would host the Olympics for all time.

The Illinois Holocaust Museum’s main galleries tell the story of Jewish life in Eastern Europe before World War II, the Nazis’ rise to power and the systematic, state-sponsored murder of Jews, Gypsies and others. Most dramatic are the video interviews with Chicagoland survivors of the concentration camps where millions were killed. Some of the photos and film clips of Nazi atrocities, including mass murders, are quite graphic. Artifacts range from prisoner uniforms and Nazi armbands to a wooden railcar similar to the kind that took Jews to the death camps. It’s not known whether the train car, donated by the German government, actually transported victims, but one museum docent told a group, “We don’t want to know.”