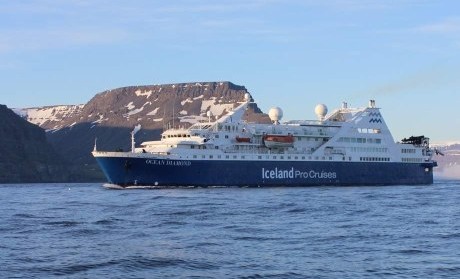 Iceland ProCruises has announced the extension of its charter contract with the 199-passenger Ocean Diamond through 2022. Bookings have increased by 20 percent annually since the launch in 2014. The 2018 season has already started strong with three “Iceland Circumnavigation” departures fully booked.

The growing interest from the North American market has prompted managing directors Gudmundur Kjartansson and Ann-Cathrin Bröcker to look for a second ship to add to the fleet. The second ship would travel around Iceland opposite the Ocean Diamond’s route.

“The ‘Iceland Circumnavigation’ is very popular with travelers, travel agents and tour planners. We would like to increase the capacity with another ship and adapt ourselves even better to our markets,” says Ann-Cathrin Bröcker. The first step has already been taken, with the season being extended by one month; the first cruises of the season are now available starting in April.

The 2019 program has been expanded to include a 7-day combo tour made up of the cruise and bus travel. In 2019 the Ocean Diamond’s program includes nine trips around Iceland with 10 harbors in 10 days, an “Iceland Circumnavigation Express” voyage that takes just seven nights and two trips to Greenland.

Investment in the Ocean Diamond also continues. In addition to a completely redesigned interior with new carpets, furniture and accessories, the bathrooms in the cabins will be rebuilt, with all renovations complete in 2019.
(www.icelandprocruises.com)