Two museums in Lower Manhattan, just a few blocks from each other, offer powerful insights into man’s inhumanity to man. For tourists shuffling through these galleries packed with reminders of evil deeds, they’re eye-opening journeys, but somber ones. It’s best not to visit both museums the same day.

The Museum of Jewish Heritage—a Living Memorial to the Holocaust is one of the world’s leading institutions chronicling the Nazi regime’s atrocities in Europe before and during World War II. Captivated by the artifacts, haunted by Holocaust survivor interviews and disturbed by heart-wrenching stories of innocent people, I spent more than two hours totally engrossed in the temporary exhibition Auschwitz. Not long ago. Not far away (running through August 30, 2020). 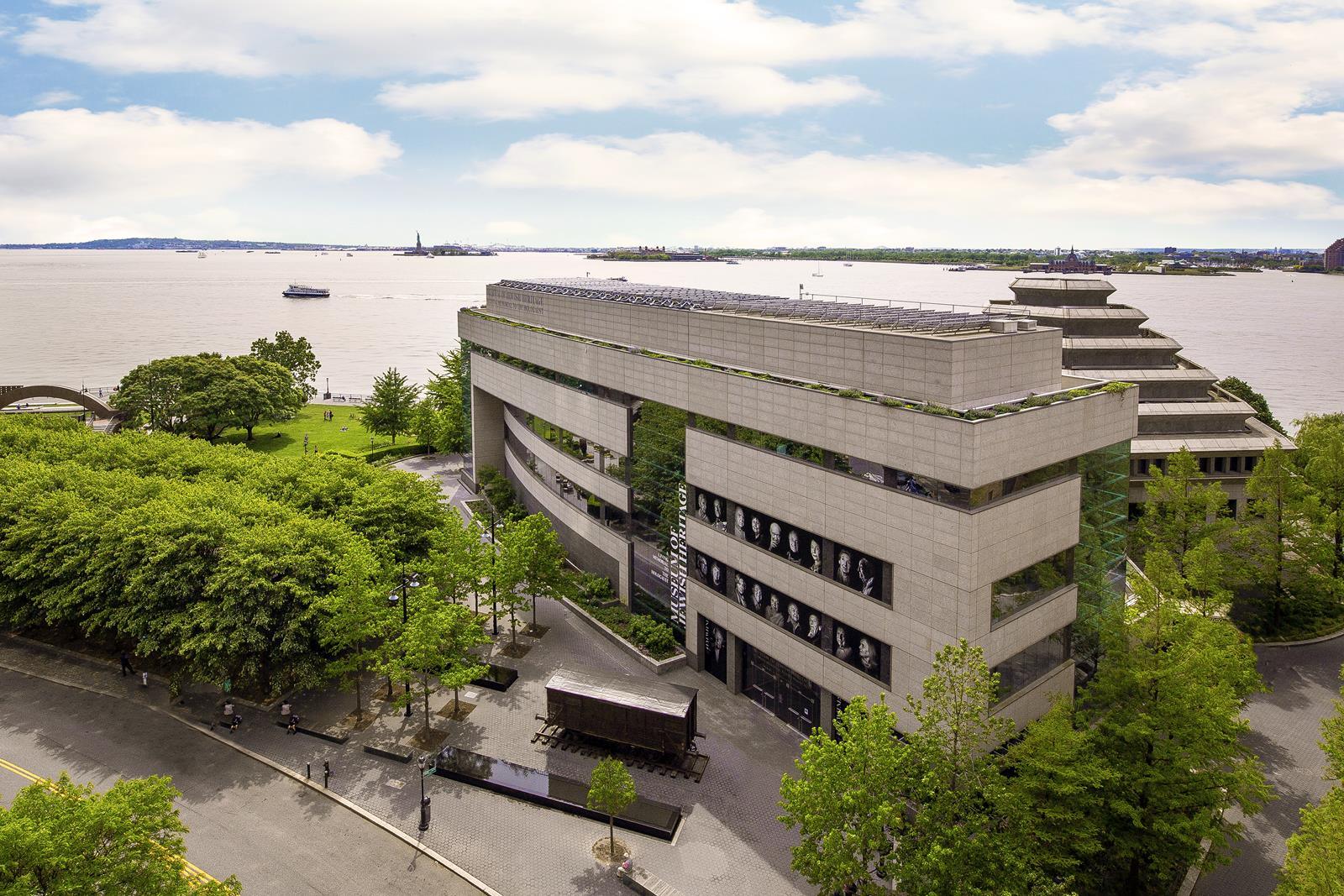 The Museum of Jewish Heritage — A Living Memorial to the Holocaust overlooks New York Harbor at the southern tip of Manhattan. (Photo by John Halpern)

Originally scheduled to end its New York run in early January, it is the most comprehensive Holocaust exhibition about Auschwitz ever mounted in North America. Auschwitz, the notorious complex of concentration and extermination camps in Poland where nearly a million Jews and tens of thousands of others were murdered, is considered the most significant site of the Holocaust.

Large-scale maps, photos and videos make the era come alive in a big, bold way. Besides documenting the unspeakable horrors of Auschwitz, the exhibition looks at other camps and the conditions in Jewish ghettos across Europe. Grainy black-and-white film clips of life in Germany under Adolf Hitler show mass rallies and adoring crowds cheering the despot’s motorcade. Exhibits trace the development of Nazi ideology, and rare artifacts depict the world of the perpetrators—SS men who created and operated the largest camps. Among the nearly 100 items from the Museum of Jewish Heritage’s own collection are Heinrich Himmler’s SS helmet and his annotated copy of Hitler’s Mein Kampf. 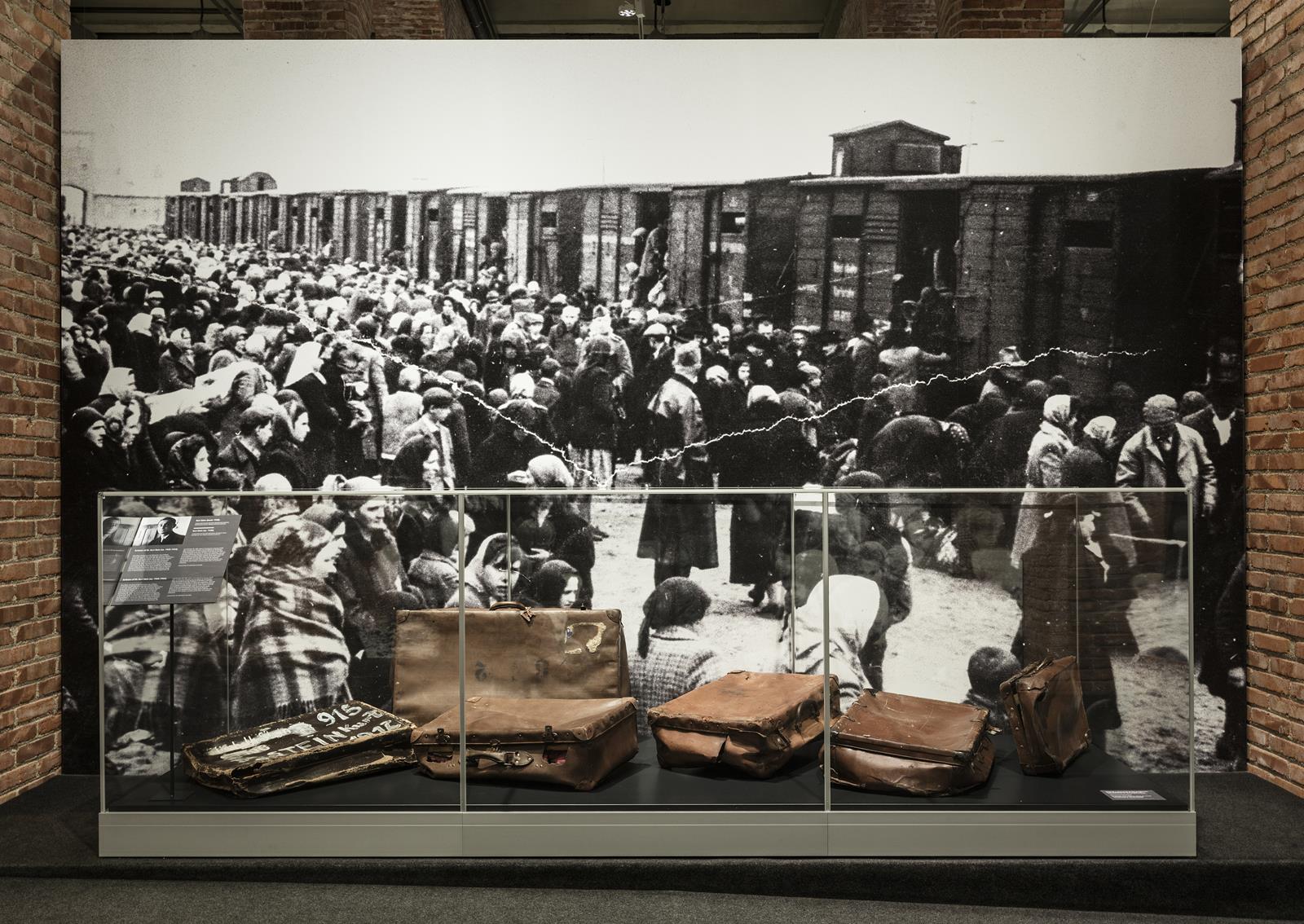 Featuring more than 700 original objects and 400 photographs, mainly from the Auschwitz-Birkenau State Museum, the New York exhibition allows visitors to views hundreds of personal items, such as suitcases, eyeglasses and shoes that belonged to Auschwitz survivors and victims. Many of the materials, on loan from more than 20 institutions and private collections around the world, have never been seen before in North America. 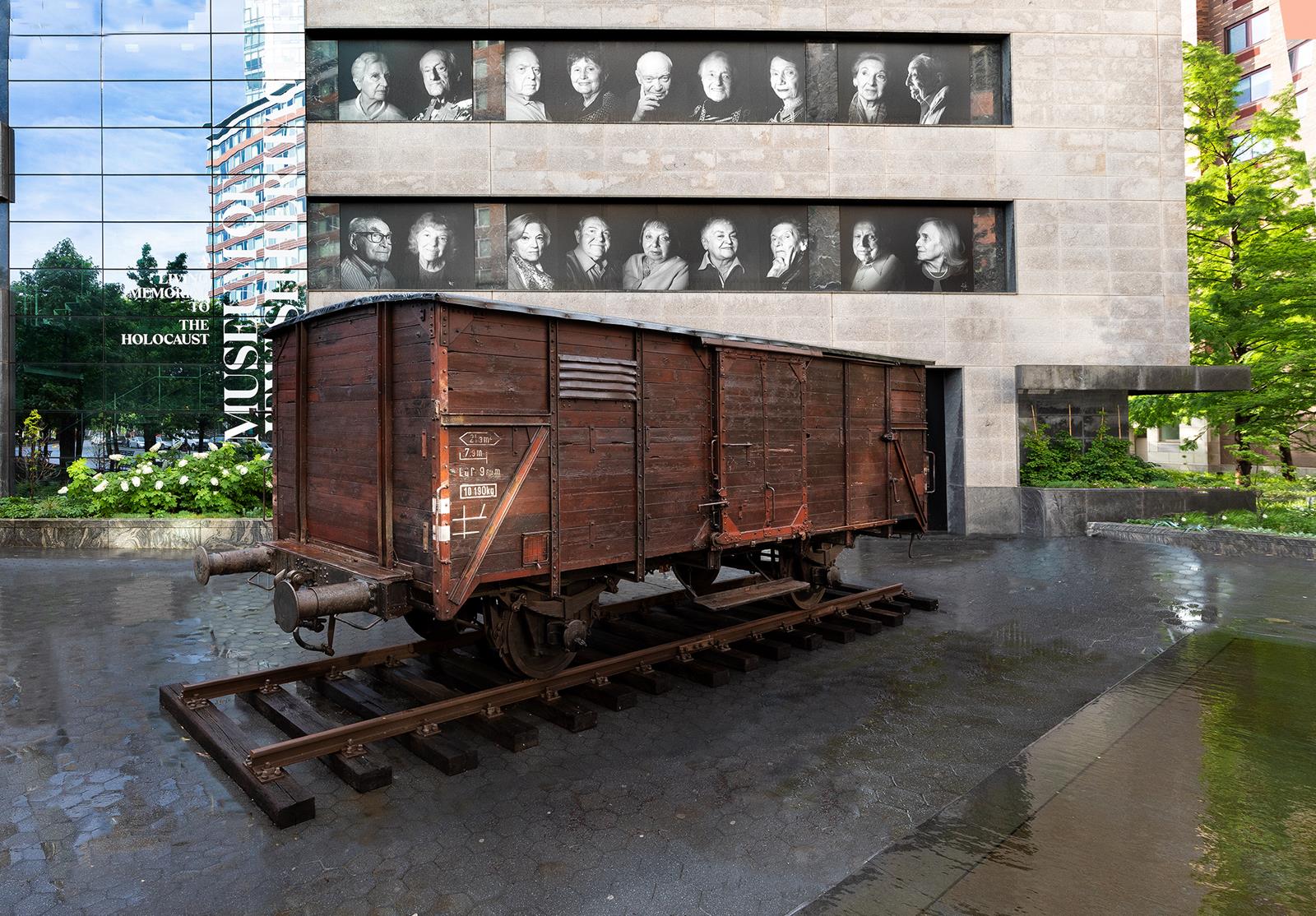 Up to about 80 people were crammed into a freight car when they were deported to Auschwitz. This car stands by the museum entrance. (Collection of Musealia/Photo by John Halpern, Museum of Jewish Heritage)

They include concrete posts from a fence at the Auschwitz camp and part of an original barrack for Auschwitz prisoners. Outside in the plaza stands a German-made freight train car used for the deportation of Jews to the ghettos and extermination camps in occupied Poland. 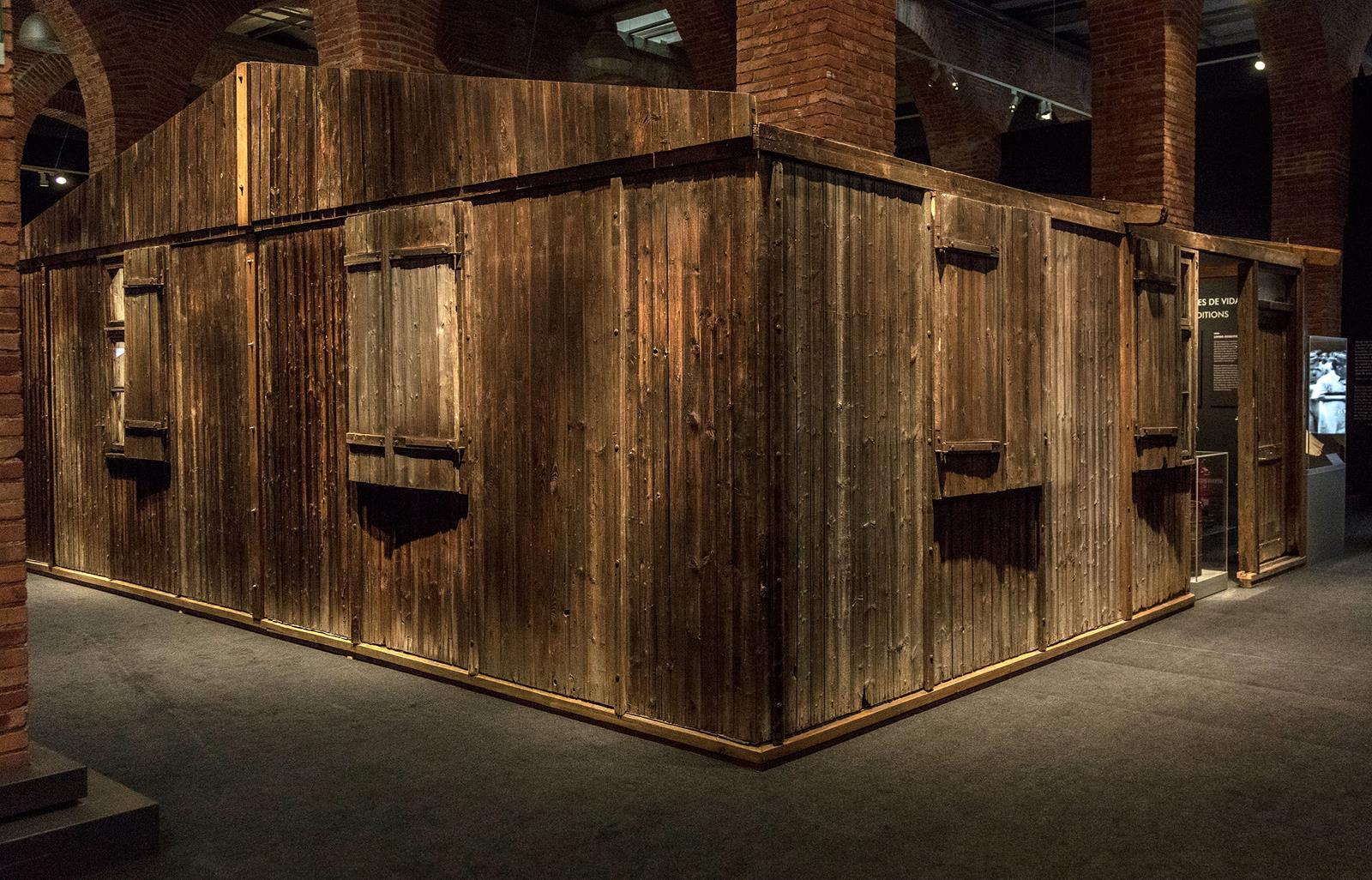 Also on display: a gas mask and tin of Zyklon B gas used in the gas chambers of Auschwitz; Czech artist Alfred Kantor’s sketchbook and portfolio that contain over 150 original paintings and drawings from Auschwitz and other camps; the trumpet that Louis Bannet (who helped popularize American jazz in Europe and  acclaimed as the “Dutch Louis Armstrong”) credits for saving his life while imprisoned at Auschwitz; prisoner registration forms and identification cards; personal correspondence; and a rescued Torah scroll from a synagogue in Hamburg. 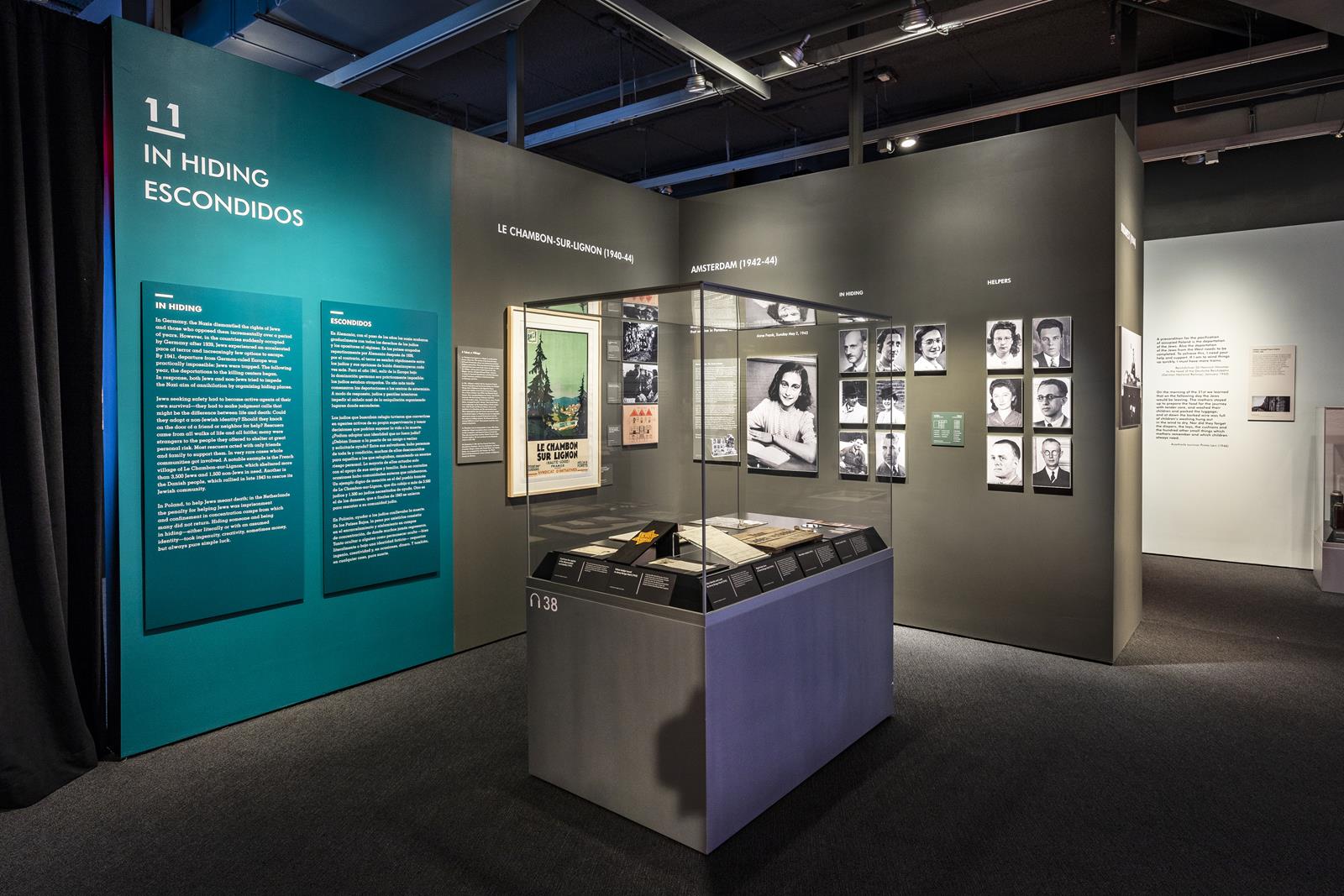 The exhibition includes a collection of artifacts from the Anne Frank House in Amsterdam. (Museum of Jewish Heritage/John Halpern)

On loan from the Anne Frank House in Amsterdam are artifacts never before permitted to travel to North America. One item, a collection of dried beans discovered lodged between the cracks of stairs where Anne Frank had hidden from the Nazis, has never been displayed anywhere, ever. Also from the family’s Amsterdam house are photographs of the Franks, a drawing Anne made as a student (before going in to hiding) and a wooden handle that that the family used to rotate the bookcase that kept them—and four other Jews—hidden from the Nazis for more than two years. In September 1944, the Franks were deported to Auschwitz, where the mother, Edith, died in January 1945 and her husband, Otto, was liberated later that month. Anne and her sister died in February 1945 in the Bergen-Belsen camp.

Artifacts include a short worn by a political prisoner in Auschwitz. (Collection of the Auschwitz-Birkenau State Museum, Oswiecim, Poland/Musealia)

Admission to the Auschwitz exhibition is by timed entry ticket. An audio guide is included in the price. The museum is closed on Saturdays.

The Museum of Jewish Heritage—A Living Memorial to the Holocaust, the third-largest Holocaust museum in the world, anchors the southernmost tip of Manhattan. Located in the Battery Park City neighborhood, the hexagonally-shaped building is close to the ferries for Liberty and Ellis islands. Group tours are available. (groupvisits@mjhnyc.org, www.njhnyc.org)

Disturbing images also evoke raw emotions at the 9/11 Memorial & Museum, another must-see in Lower Manhattan.As  at the Auschwitz exhibition, you’ll likely spend more time than originally planned as you relive the day the World Trade Center’s Twin Towers came down in the 2001 terrorist attacks that killed nearly 3,000 people in New York, Washington, D.C. and Pennsylvania. 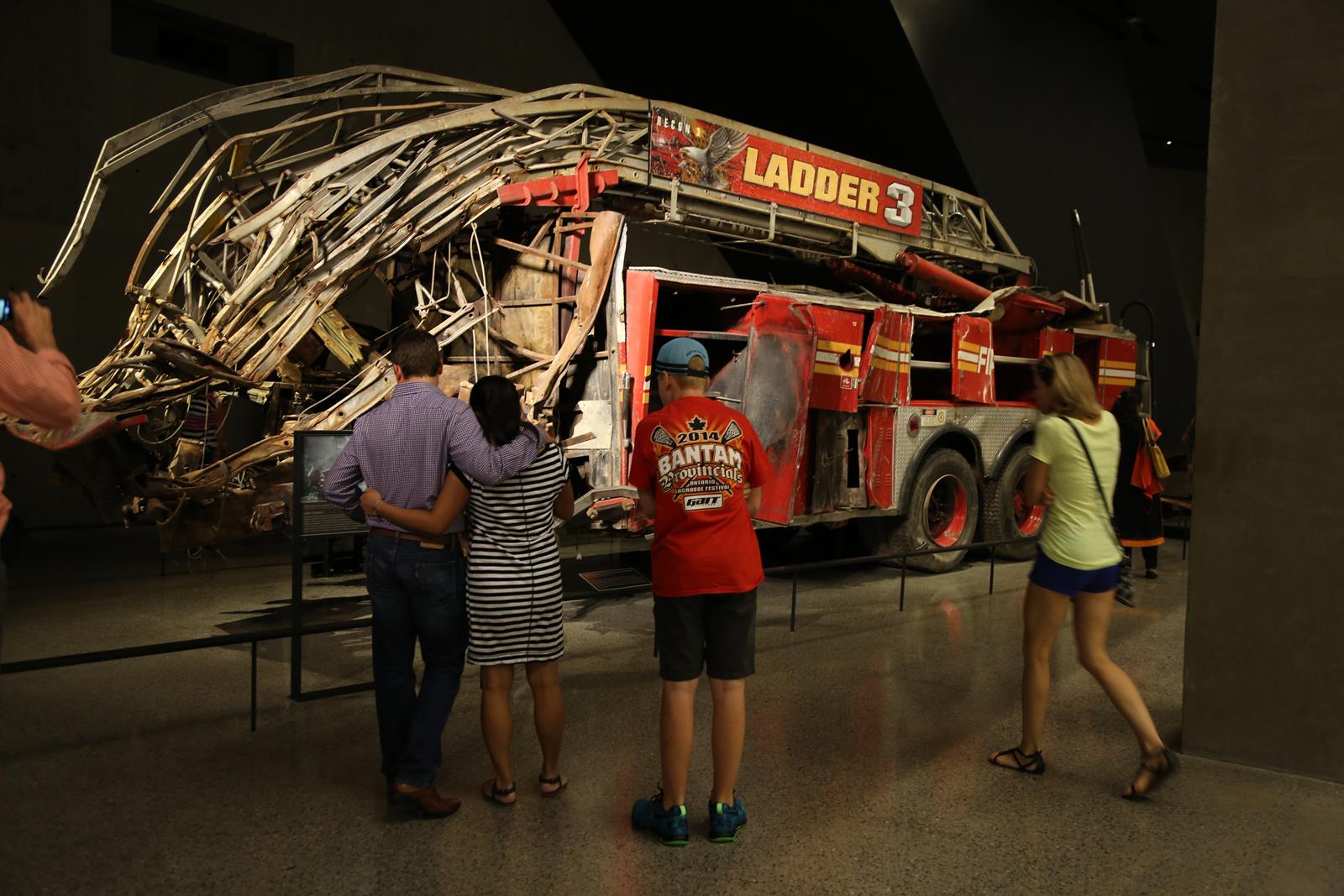 Among large-scale artifacts at the 9/11 Memorial & Museum in New York is a fire truck dispatched to the World Trade Center. The museum is one of the attractions covered on the New York CityPASS. (Photo by Amy Dreher, 9/11 Memorial)

Museum exhibits include artifacts from all three sites—airplane fragments, a mangled New York Fire Department truck, shoes worn by victims, a dust-covered wallet, and a melted telephone and Rolodex from the Pentagon. Videos of TV news reports and real-time audios of police and fire dispatchers recall that fateful day. Most chilling is the room where videos show office workers falling or jumping from the burning towers. 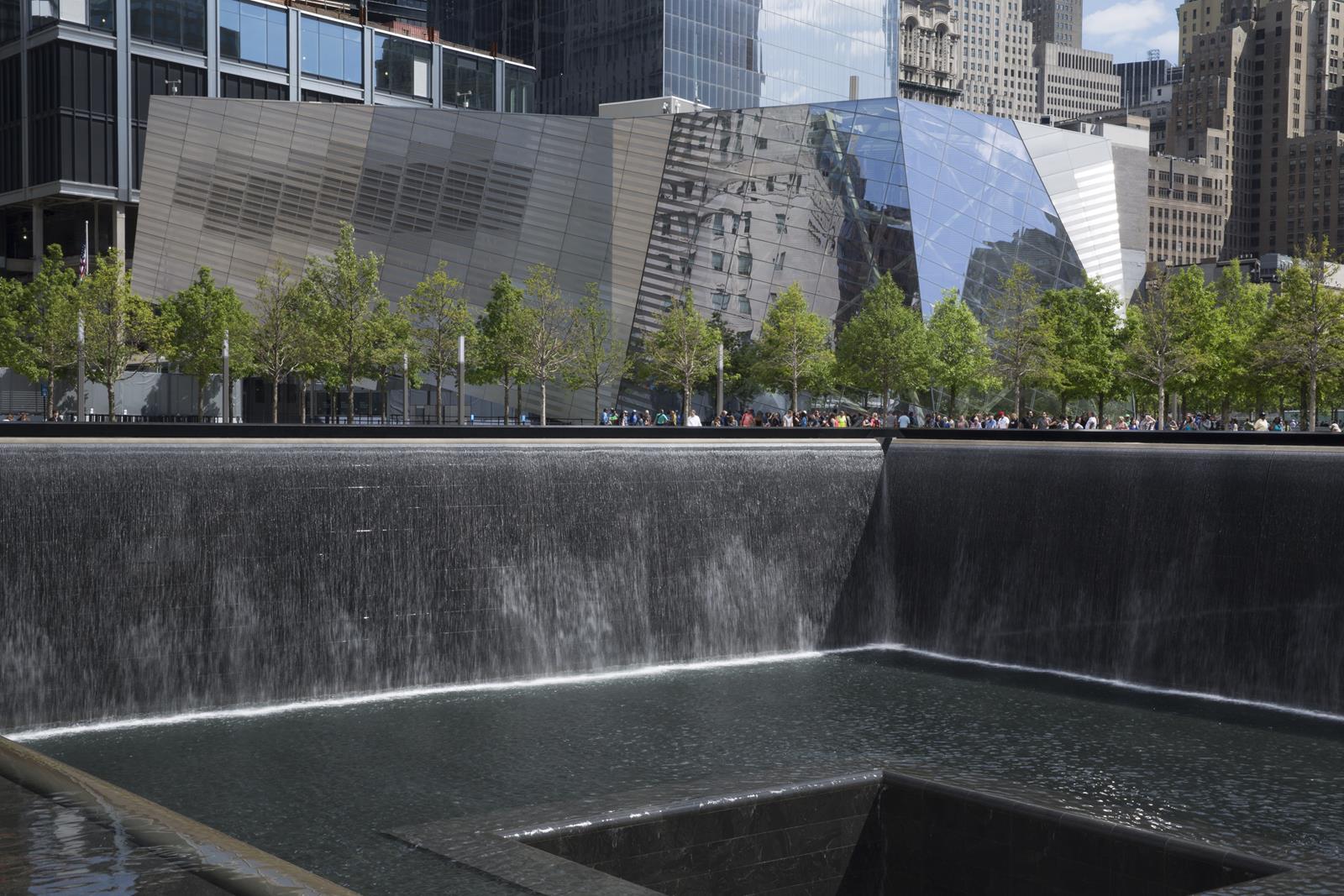 The two pools at the 9/11 Memorial feature the largest manmade waterfalls in North America. (Photo by Jin Lee, 911 Memorial)

One exhibition honors the 2,977 individuals killed as a result of the terrorist attacks of September 11, 2001, and the six individuals killed in the bombing of the World Trade Center on February 26, 1993. The floor-to-ceiling presentation of 2,983 portrait photographs surrounds visitors as they enter the gallery. Using touchscreen tables, visitors can learn more about the victims’ lives. Individual profiles are searchable by name, birthplace, place of residence and employer. In the gallery’s inner chamber, profiles of victims are projected onto the walls along with personal photographs and recorded remembrances left by family members, friends and former colleagues.

The 9/11 Museum’s new temporary exhibition, Revealed: The Hunt for Bin Laden, tells the story of those who were involved in the hunt for Osama bin Laden, shedding light on the intelligence and military activities that led to the raid on bin Laden’s compound in Pakistan nearly 10 years after 9/11. Running through May 2021, it includes recently declassified information and personal accounts from those involved in finding and killing the al-Qaida leader who planned the deadly September 11 attacks. 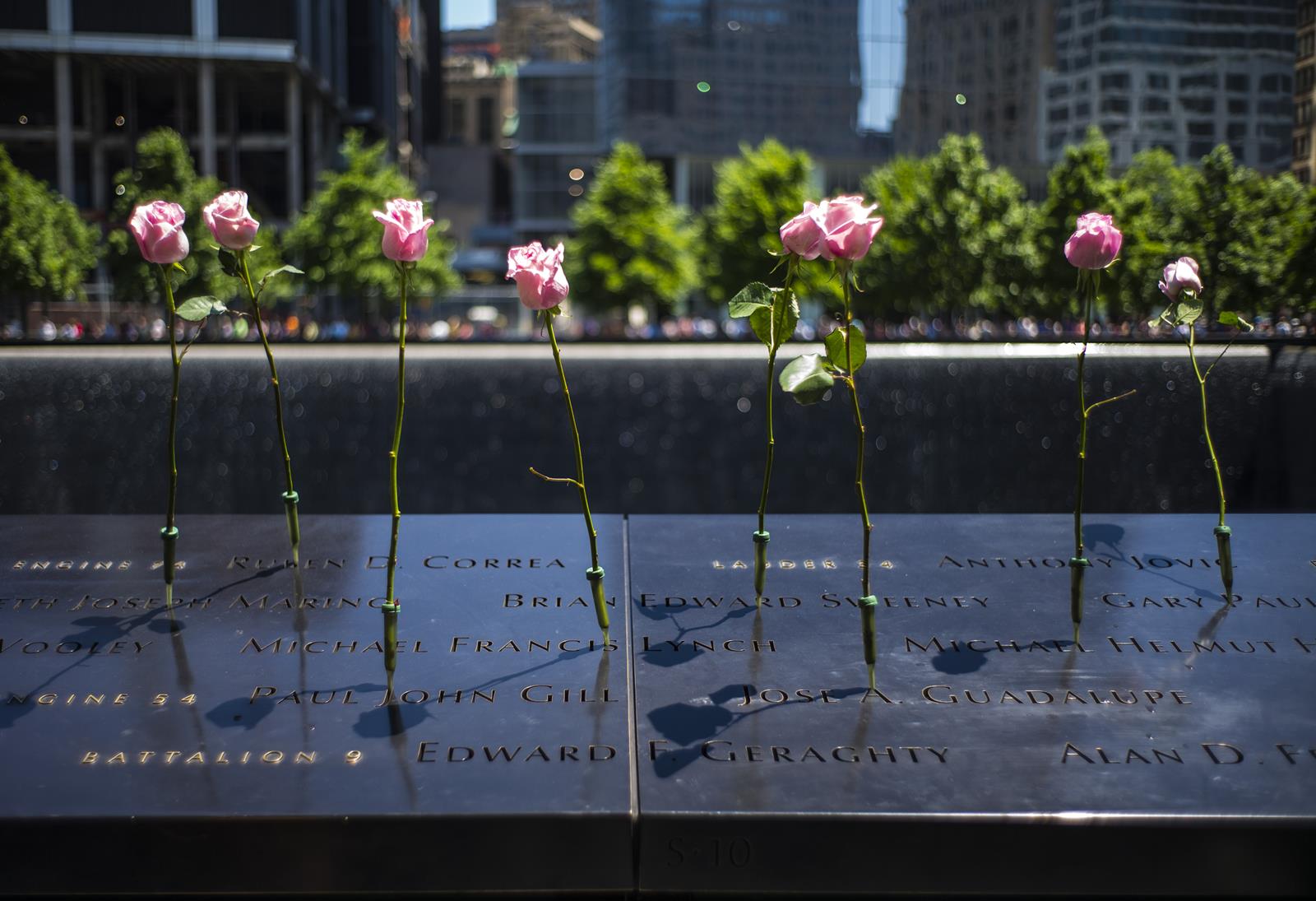 Names of the victims of the 2001 and 1993 terrorists attacks are inscribed in granite at the 911 Memorial in New York. (Photo by Jin Lee/911 Memorial)

The outdoor 9/11 Memorial features a tree-shaded plaza with two massive reflecting pools occupying the footprints of the ill-fated towers. Each pool is an acre in size and features the largest manmade waterfalls in North America. Names of the nearly 3,000 killed in the 2001 and 1993 terrorist attacks are inscribed in bronze parapets surrounding the pool. While the museum charges admission, the 16-acre memorial area is free and open to the public. For 9/11 Museum ticket information, visit www.911memorial.org.

The museum is one of the attractions included in the New York CityPASS, a booklet of six tickets valid for nine days ($132 adults, $108 youth). The pass also grants admission to other museums, the Empire State Building and Top of the Rock observation decks, and the Statue of Liberty/Ellis Island ferry or Circle Line sightseeing cruise. Passholders gain speedy entry, skipping the ticket lines. (www.citypass.com)