Nestled between skyscrapers in the heart of downtown Chicago, red-and-white-striped huts in Daley Plaza every year invite holiday shoppers to take a virtual trip to storybook Germany. It’s a chance to savor Old World traditions while temporarily forgoing suburban malls, familiar chains and big-city department stores.
Vendors at Christkindlmarket, gearing up for its 16th year, will offer one-of-a-kind treasures at the largest German-style Christmas market outside of Germany. More than 65 percent of them travel all the way from Europe to set up shop in Chicago’s Loop from Nov. 23-Dec. 24. 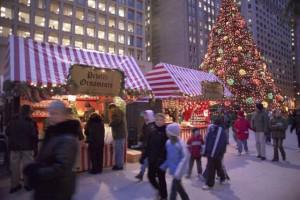 Imported goods at the little shopping village include nutcrackers, cuckoo clocks, wood carvings, beer steins, wooden toys and jewelry, plus ornaments of all shapes and sizes. But many merrymakers come for the German food and drink, indulging in bratwurst and potato pancakes, schnitzel and strudel. They quench their thirst with a glass of German beer or Gluhwein (hot spiced wine) served in a souvenir boot-shaped mug.

Several walk-in cabins offer a warm place to shop, and the Lufthansa Festival Tent and the Timber House provide places to relax and enjoy the goodies. Music and dance performances are scheduled at various times.

Christkindlmarket is only a block from State Street, the Loop’s main shopping corridor and the scene of the McDonald’s Thanksgiving Day Parade. With over 100 parade units, including many super-sized helium balloons, it’s one of the country’s largest Thanksgiving parades and ends with the arrival of Santa Claus. Originally called the Christmas Caravan in the 1930s, the State Street spectacle was created to help lift the spirit of residents suffering through the Great Depression. 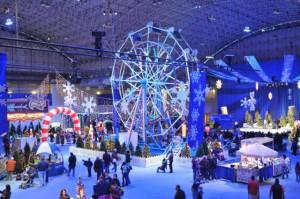 Navy Pier, Chicago’s most visited tourist attraction, invites families to celebrate the holidays during its 11th annual Winter WonderFest event. This year’s event (Dec. 2-Jan. 8 ) has been extended one week. Admission to the holiday hamlet inside Festival Hall is free, though guests must purchase a wristband for some activities. On the agenda are musical performances, ice skating, inflatable slides, rides and video games. New this year are sleigh rides down Dock Street on Fridays, Saturdays and Sundays.

The Museum of Science and Industry celebrates 70 years of “Christmas Around the World,” a multicultural event centered around the 45-foot Grand Tree in the Rotunda. Ornaments this year are inspired by the stories of Dr. Seuss (author Theodor Seuss Geisel), whose creative genius is featured in the exhibit “There’s Fun to Be Done: Dr. Seuss & the Art of Invention,” which runs through Jan. 8.

Festooned with some 30,000 lights, the museum’s giant tree is surrounded by more than 50 smaller trees decorated by volunteers from Chicago’s ethnic communities to represent their cultures and holiday traditions. Visitors can stroll through the trees, enjoy intermittent falling “snow” and see ethnic song and dance performances on the stage. The museum’s concurrent “Holidays of Light” exhibit spotlights global holidays that celebrate light or enlightenment, such as Hanukkah, Kwanzaa and Diwali.

Yuletide visitors to the Field Museum can indulge their sweet fantasies in “Chocolate Around the World,” on view through Jan. 8. The exhibit focuses on the science and history of chocolate and its impact on human culture. 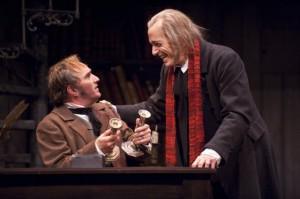 Many out-of-towners find their holiday magic in Loop theaters. Perennial favorites are Charles Dickens’ A Christmas Carol at the Goodman Theatre (Nov. 18-Dec. 31) and the Joffrey Ballet’s The Nutcracker, set for Dec. 9-27 at the Auditorium Theatre of Roosevelt University.

If you’re looking for something new in stage entertainment, consider A Christmas Story, The Musical! Based on the classic 1983 comedy film, this touring production at the Chicago Theatre (Dec. 14-30) chronicles bespectacled Ralphie Parker as he schemes his way toward the holiday gift of his dreams, a Red Ryder Action Air Rifle BB Gun. A leg lamp, pink bunny pajamas and a double-dog-dare to lick a freezing flagpole recall iconic scenes from the movie. Peter Billingsley, who starred as Ralphie three decades ago, is one of the musical’s producers.

At the nearby Oriental Theatre, Donny and Marie Osmond appear together for the first time on a Chicago stage during a three-week engagement. In the tradition of the Osmond Family Christmas television specials, the sibling entertainers star in Donny & Marie – Christmas in Chicago from Dec. 6-24.