Since it was discovered in 1678 by French explorer and missionary Father Louis Hennepin, Niagara Falls has been regarded as one of the great natural wonders on earth. As Father Hennepin wrote, “ Betwixt the Lake Ontario and Erie, there is a vast and prodigious Cadence of Water….The Universe does not afford its Parallel…The Waters which fall from this horrible Precipice do foam and boyl after the most hideous manner imaginable, making an outrageous Noise, more terrible than that of Thunder.”

The thundering phenomenon, in which more than 750,000 gallons of water flow over the falls each second, attracts millions of visitors a year. Considered a must-see by many international tourists traveling around America, Niagara Falls is a group-tour staple for the U.S. market as well and never fails to awe. Groups in northwestern New York will find plenty to do in and around the cities of Niagara Falls and Buffalo, situated about 20 miles apart on the Niagara River, across from Ontario, Canada.

At Niagara Falls State Park, the oldest state park in the country, visitors can view the 1,000-foot drop of the American Falls at Prospect Point, where a visitor center has exhibits and a movie, Niagara: Legends of Adventure.  (Niagara Falls is actually three falls—American and Bridal Veil Falls on the New York side, Horseshoe Falls on the Ontario side. Carved out along their path is a seven-mile canyon known as Niagara Gorge.)

Beyond the visitor center at Prospect Point is the Observation Tower and its glass-enclosed elevators that travel down to the foot of the falls, where Maid of the Mist boats dock. A classic Niagara Falls activity dating back to 1846, these wooden vessels take riders, clad in slickers, right to the bases of the falls. From the rocking boats, you’ll feel the spray and witness the roaring water on its way from four of the Great Lakes—Superior, Michigan, Huron and Erie—to the fifth, Ontario. Even more adventurous is a whitewater experience with Whirlpool Jet Boat Tours, with boarding at three locations, including Lewiston, N.Y. The 1500-horsepower jet boats tackle the rapids in the lower Niagara Gorge, reaching speeds of 65 mph and leaving you absolutely drenched. 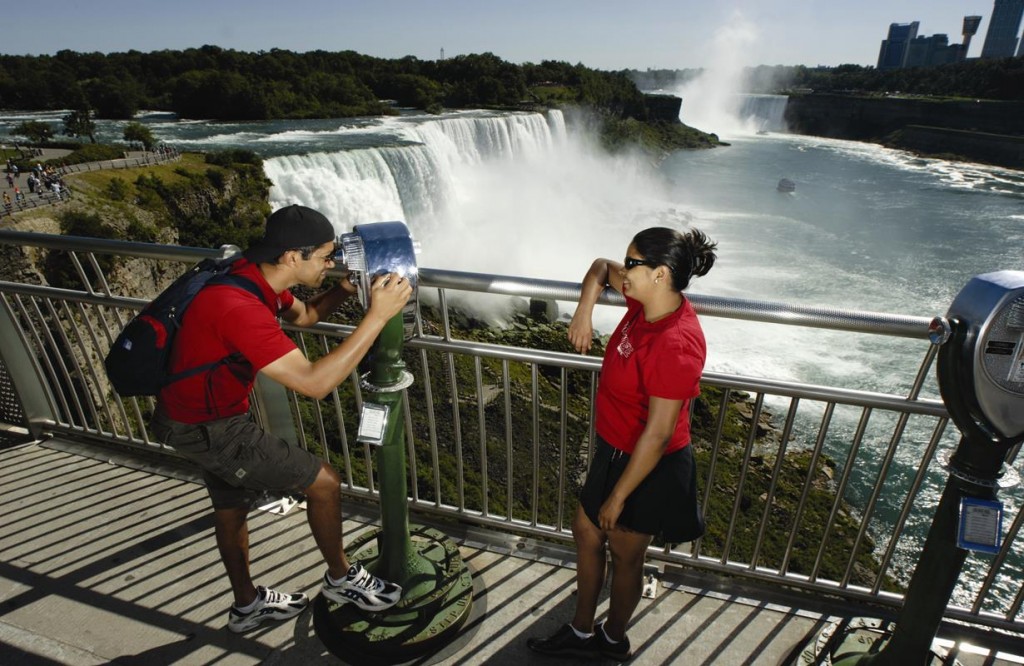 The Cave of the Winds Trip, also calling for rain ponchos, is a guided tour following a wooden walkway to the base of Bridal Veil Falls; expect to be doused while standing on a deck just 20 feet from the cascades. The trip starts with an elevator ride into the gorge on quiet, wooded Goat Island, located in the middle of the Niagara River, upstream from Prospect Point in Niagara Falls State Park. For a look at the falls’ geological history, check out the exhibits and multimedia show at Niagara Gorge Discovery Center, also in the park.

In Youngstown, north of Niagara Falls, Old Fort Niagara (adjacent to Fort Niagara State Park) captivates groups with commanding views of Lake Ontario and costumed soldiers who interpret the history of the stone fortress built by the French in 1726 at the mouth of the Niagara River and later occupied by British and American forces. Military re-enactments and fife and drum drills highlight the summer schedule.

Herschell Carousel Factory Museum in North Tonawanda, midway between Niagara Falls and Buffalo, occupies a former plant that produced more than 50 carousels a year during the 1920s and 30s. Admire the menagerie of magical merry-go-round creatures (hand-carved entirely of wood until 1928) and take a whirl aboard a 1916 carousel. Also on display are new carved animals.

For a birds-eye view of Buffalo, Lake Erie and the Niagara River, take the elevator to the 25th floor of the Art Deco Buffalo City Hall and then walk three flights to the observation deck. At the southern end of downtown along Lake Erie is the Buffalo and Erie County Naval and Military Park, where visitors can board a submarine, destroyer and guided-missile cruiser.

Also downtown is the Theater District, which has a half dozen theaters and cabarets along with shops, galleries and restaurants. Its centerpiece is Shea’s Performing Arts Center on Main Street, a former 1920s movie palace decorated in marble and gilt. Your group can see a Broadway play, dance production or perhaps an opera; theater tours are available.

The streets of Allentown, a historic neighborhood northwest of the Theater District, are lined with Victorian homes, many of which are now boutiques, art galleries, eateries and antique shops. The 1838 Wilcox Mansion is the Theodore Roosevelt Inaugural National Historic Site, where the 26th U.S. president took the oath of office after President William McKinley was assassinated at the Pan-American Exposition in Buffalo in 1901. Artifacts include the handkerchief that assassin Leon Czolgosz used to cover his gun.

The only remaining permanent building from the exposition is now the museum of the Buffalo and Erie County Historical Society, one of several attractions in or near Delaware Park, north of downtown. Across the lake is the Albright-Knox Art Gallery, known for its outstanding collection of modern and contemporary art. Also in Delaware Park is the Buffalo Zoo.

Tour planners who package the natural splendor of Niagara Falls and urban treasures of Buffalo can expect happy clients gushing with cascades of compliments.