Planners from Chicagoland and beyond enjoy the show as they get the lowdown on group pricing and new developments in Chicago theater offerings.

From the august halls of the Civic Opera House to the music of Johnny Cash, 30 group tour planners got an inside look at Chicago’s vibrant theater scene on a recent one-day FAM organized by Tami Manton of Group Theater Tix and Michael Embrey of Broadway to You, a division of FunMe Events.

Most of the guests on the fun-filled, nine-hour whirlwind were from the Chicago area, with some coming from Indiana and Michigan. Trip planners represented a park district, senior center, Jewish organization and singles group, plus tour companies and travel agencies. Some had been on last year’s theater FAM, which was so successful that Manton and Embrey decided to partner again to show off the city’s performing arts possibilities for groups. Other FAM hosts were The Second City, Lyric Opera of Chicago and Potbelly Sandwich Shop, which catered lunch. 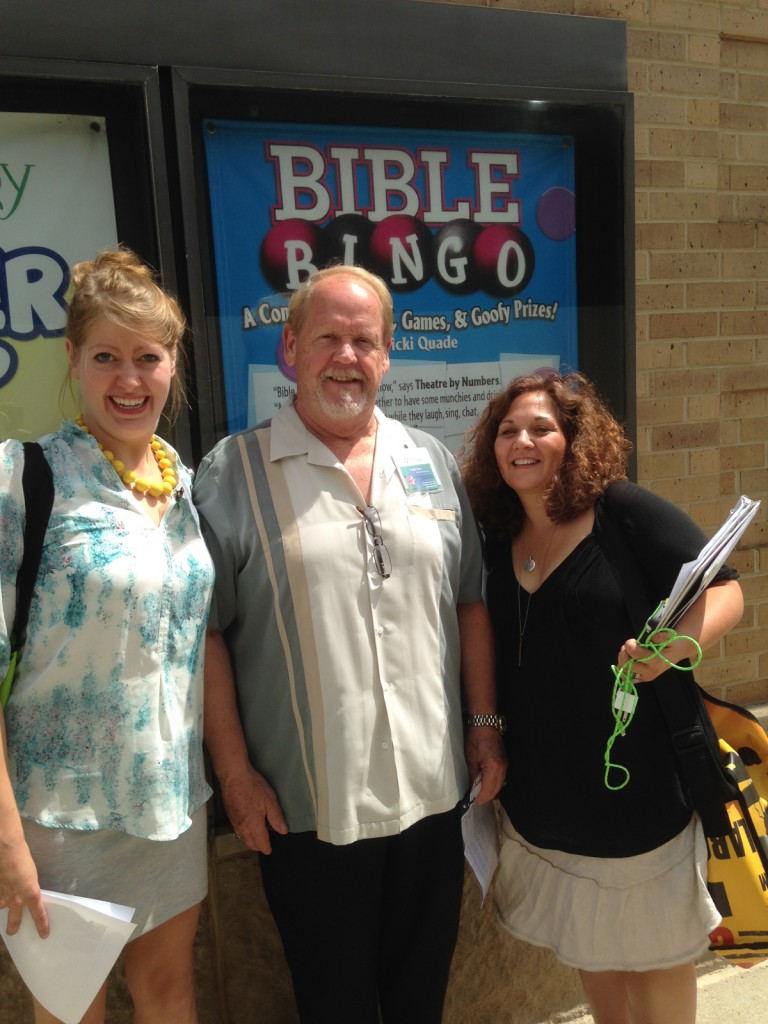 On stops throughout the North Side and downtown, participants were met by theater directors and group sales people who provided details on theater amenities and upcoming productions. Tour planners had a chance to ask questions regarding accessibility, bus parking, matinees, theater size and restaurant options.

On the short bus rides between theaters, Manton and Embrey talked up special ticket deals, new hotel and restaurant developments in Chicago, and other group perks. Embrey mentioned that his company hires comedians as step-on guides, quipping that “you can teach comedians history but you can’t teach historians comedy.”

Tour planners also learned that shows can be performed just for their groups (such as a one-man Frank Sinatra show that Embrey recently arranged for a group of 120 from Michigan). And it’s possible for groups to join together and schedule a matinee performance when none is listed on the theater’s calendar. 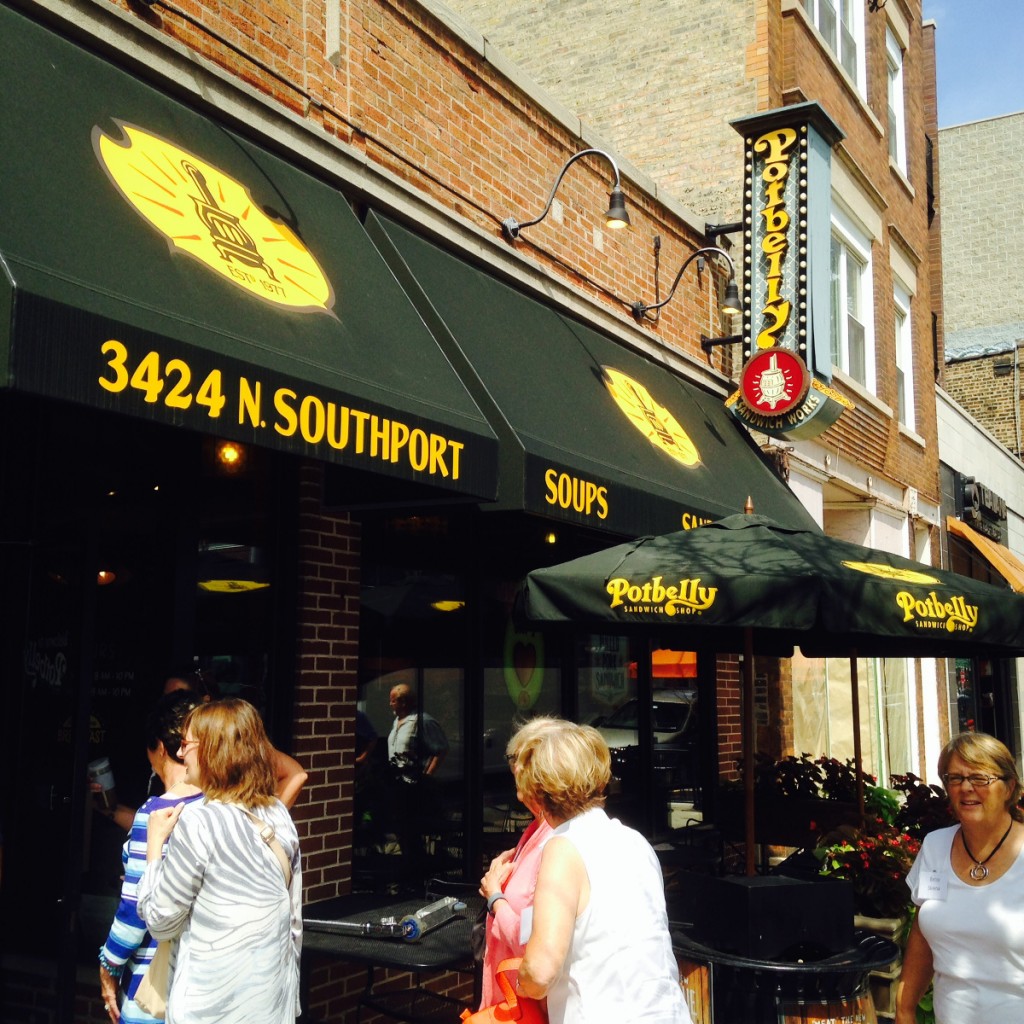 While downtown theaters with the big Broadway shows tend to get the attention, Chicagoland abounds with dozens of theater options, including Broadway fare at smaller theaters that are less expensive and more intimate. Embrey said there are 163 theaters in the Chicago area, 30 of them within a one-mile radius in the Belmont Theater District, not far from Wrigley Field. That includes the largest concentration of improv theaters in the nation.

Stage 773, a 145-seat space on Belmont Avenue, showcases American musicals produced by Porchlight Music Theatre. I was never sure what Porchlight was all about, but the mystery vanished at Porchlight’s rehearsal studio, where the FAM group gathered for breakfast for a rousing start to the day. The studio occupies part of the former Hammond Organ factory on Diversey Avenue. Our group was serenaded by numbers from upcoming Broadway shows Applause, Babes in Arms, Ain’t Misbehavin’ and Side Show.

Porchlight’s artistic director, Michael Weber, told us about the 2015-2016 season and explained the Porchlight Revisits series, which presents “lost musicals” (like Babes in Arms and Applause) for three nights only. They include a “Behind the Show Backstory” multi-media presentation in which Weber shares the show’s creative history and backstage gossip. 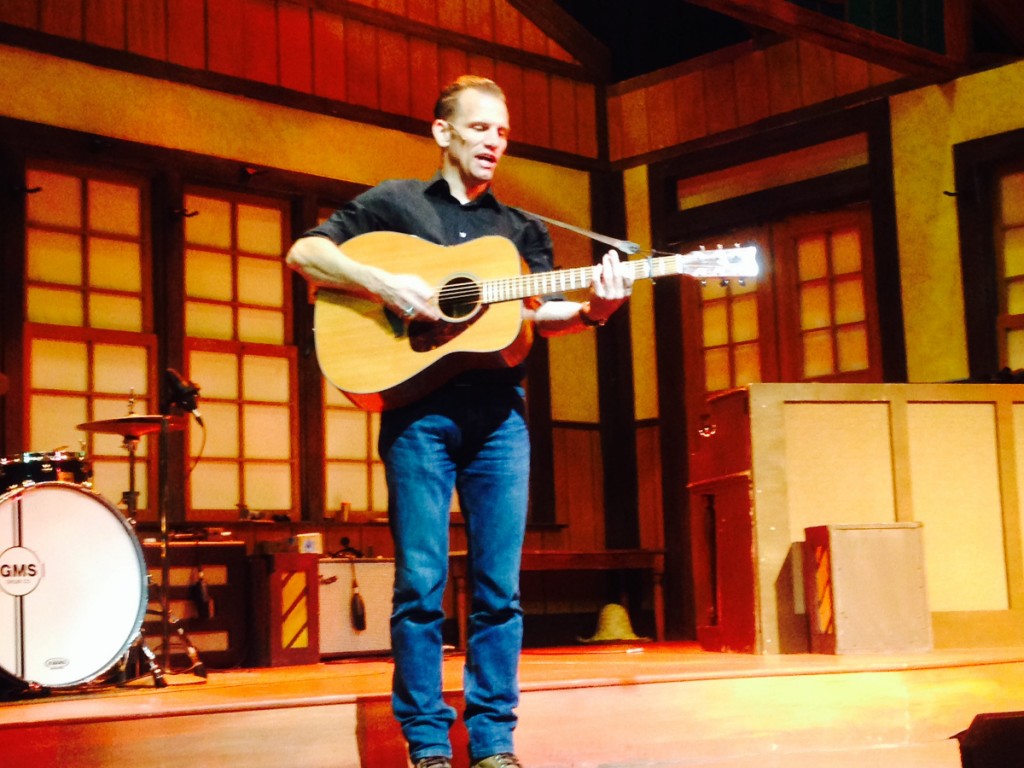 Ring of Fire: The Music of Johnny Cash, Mercury Theater

Group Theater Tix has money-saving plans for all the Porchlight productions. Side Show (Sept. 11-Oct. 25) really piqued my interest. It’s the true-life story of the Hilton sisters, Siamese twins who were a big vaudeville act in the 1930s, and their struggle to accept and love themselves for what they were. Ain’t Misbehavin’ will entertain holiday audiences (Nov. 14-Dec. 20). Porchlight’s 21st season concludes with Far from Heaven (Feb. 5-March 13) and Dreamgirls (April 8-May 15).

Other stops on the FAM included a brand new theater and one that’s 102 years old. The plush Windy City Playhouse, with two tiers of lounge-style seating and a smart bar area in the lobby, just opened in March. All the seats (120-150, depending on configuration of the stage) have side tables or a small shelf to hold drinks and snacks. The Top Shelf seats close to the stage are swivel chairs. There are themed drinks for each play. One of the upcoming shows is Neil Simon’s Chapter Two, based on the playwright’s second marriage.

FAM guests at the venerable Mercury Theater, dating back to 1913, were treated to songs by Michael Monroe Goodman, who plays a young Johnny Cash in Ring of Fire: The Music of Johnny Cash (through Nov. 1). Also on Mercury’s 2015 playbill is The Christmas Schooner, a heartwarming holiday story now in its 22nd year in Chicago. Shows in 2016 include The Man Who Murdered Sherlock Holmes (Jan. 20-March 20) and Mel Brooks’ The Producers (April 13-June 26).

Mercury Theater’s executive director, Walter Stearns, told the group about his plans to open a new restaurant adjacent to the theater. Occupying the former Cullen’s Bar & Grill, it will feature stage entertainment. 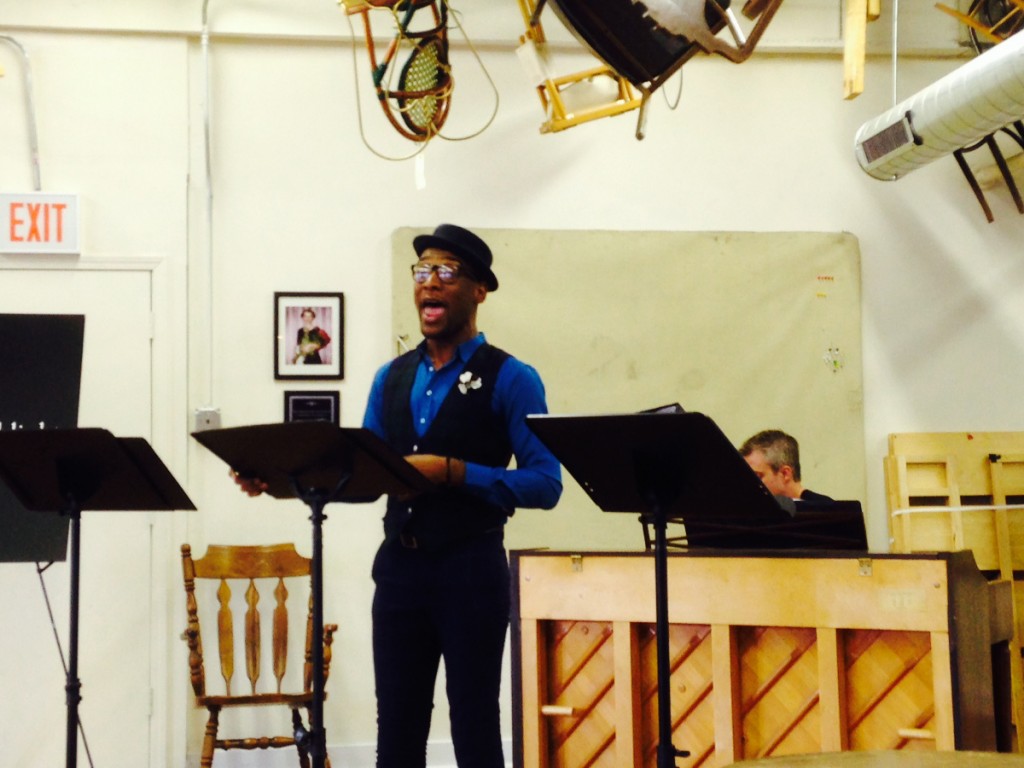 At Pot Belly Sandwich Shop on Lincoln Avenue, we picked up box lunches to eat on the bus. (Pot Belly will deliver boxed lunches to the bus, hotel, airport or tourist attraction.) In the restaurant’s back room, which seats 100, two actors gave us a peek at We Gotta Bingo, an interactive bingo experience perfect for groups. Staged at Chicago Theater Works on Belmont Avenue, the comedy show revolves around a church bingo fundraiser in a rowdy German beer hall, in the tradition of Tony ̓n Tina’s Wedding. It includes an Italian meal, full bar service, dancing and a chance to win wacky prizes.

Our visit to the Royal George Theatre included a visit with Jeremy Wechsler, artistic director of Bad Jews, a funny show featuring three cousins in town for their grandfather’s funeral. We also saw the set for Late Nite Catechism and Bible Bingo, interactive, one-persons laugh fests that can be scheduled any time for groups of 30 or more.

Perhaps the quintessential theater experience in Chicago is The Second City, the leading brand in improv-based sketch comedy and another stop on the FAM. It’s a Chicago institution, one that has spawned the careers of comedy greats from Joan Rivers and Stephen Colbert to Saturday Night Live stars John Belushi, Bill Murray, Dan Aykroyd, Gilda Radner, Tina Fey and Amy Poehler. Group arrangements can be made at all three performance venues in the Old Town complex at North and Wells. There are shows seven nights a week.

Our multi-act tour ended with a visit to the Civic Opera House, home of the Lyric Opera of Chicago. Joel Friend, group sales manager, provided an overview of what goes on in the 1929 Art Deco space and went over the 2015-2016 season. He impressed on the group that an opera doesn’t have to be expensive and that, even though most operas are sung in a language other than English, they can be enjoyed because projected English subtitles appear above the stage. Main-floor seats can be under $70, balcony seats under $50, he said. Groups can arrange a 30-minute pre-opera talk in the historic, 3,563-seat theater to learn about what they’ve come to see. 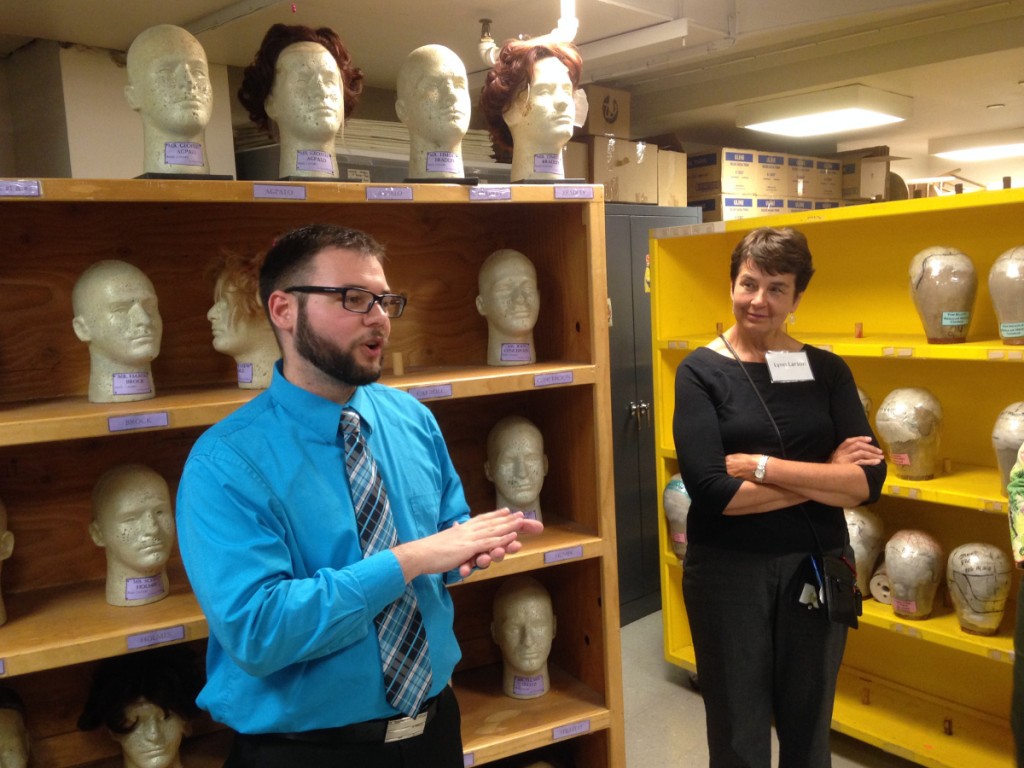 The 2015/2016 Lyric Opera season begins with Mozart’s The Marriage of Figaro (Sept. 26-Oct. 24) and Rossini’s Cinderella (Oct. 4-30). Lahar’s The Merry Widow features Renée Fleming from Nov. 14-Dec. 3. The Lyric’s annual spring Broadway musical in 2016 will be Rodgers & Hammerstein’s The King and I (April 29-May 22) and features members of the Lyric Opera Orchestra and Chorus.

During our visit, the Lyric’s stage was in use, but we got to go behind the scenes and tour the props, costume and wig-making departments. Most of the wigs are made of human hair, but the electric blue ones being readied for Cinderella are from yak hair, we learned. It was fun prowling around the props room, looking at the shelves of throw pillows, body parts, goblets, chalices, lanterns and fake food from bread to grapes.

A boat excursion might be part of next year’s theater FAM.

For information on shows, concerts and events in the Chicagoland area, go to the website of Chicago Show Tickets (www.chicagoshowtickets.com), a partnership of Group Theater Tix, FunMe Events’ Broadway to You, Lyric Opera of Chicago and The Second City.