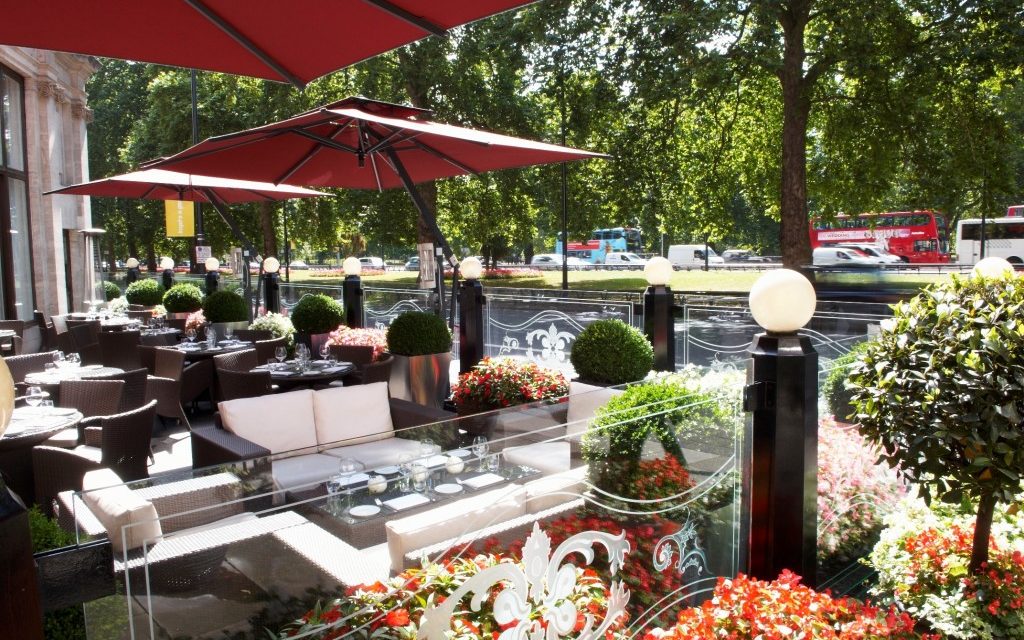 Known as the “Grande Dame of Park Lane,” London’s largest five-star hotel overlooks Hyde Park from its stately perch in Mayfair, one of the poshest parts of town. Indeed, Grosvenor House, A JW Marriott Hotel has welcomed the elite of international society to central London since 1929.

Though quintessentially British, Grosvenor House caters to American sensibilities, and 30 percent of its guests hail from the States. You’ll find a Starbucks in-house, an American-style steakhouse with a bourbon bar and wine menu heavy on California varieties, and an intriguing history that involves Anglo-American connections going back decades.

Knowing that the landmark hotel is part of the Marriott International family reassures stateside travelers. Popular with leisure groups as well as the celebrated and the wealthy, the 494-room Grosvenor House partners with such cruise lines as Disney, Holland America, Princess and Royal Caribbean on pre- and post-cruise packages.

The hotel’s aristocratic pedigree dates back to the days when the area was pastureland on the rural outskirts of London. For more than 100 years the location was the London home of the Grosvenor family, the richest urban landlords in Britain. The end of the 1800s and early decades of the 20th century, however, saw the gradual demolition of Park Lane’s mansions, including the family’s Grosvenor House, as they were replaced by hotels and apartment blocks. The Grosvenor name continues to dominate the city map with numerous Grosvenor streets and squares.

Grosvenor Square, just blocks from Grosvenor House, provides a leafy setting for the American Embassy. Outside the embassy are statues of Presidents Dwight Eisenhower (in military dress) and Ronald Reagan. (Eisenhower’s wartime headquarters were at No. 20 Grosvenor Square.) A statue of Franklin D. Roosevelt stands in the middle of the square, and the 9/11 Memorial Garden honors British victims of the U.S. terrorist attacks of September 11, 2001.

When Grosvenor House opened for business, it was the first hotel in London to have a bathroom in every bedroom and the first in Europe with running ice water in every bathroom. The original design was inspired by the maple proportions of New York hotels, and early on Grosvenor House opened an office on Fifth Avenue to make booking easier for its American clientele. The guest list has included luminaries like Orson Welles, Ella Fitzgerald, Jacqueline Kennedy and Henry Kissinger, 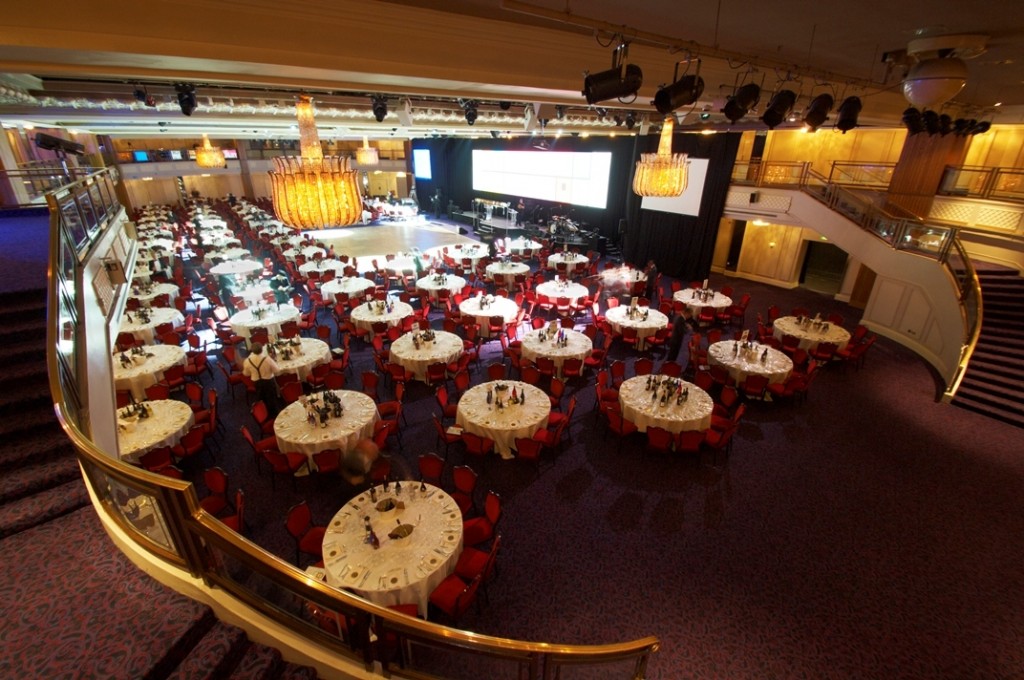 The future Queen Elizabeth II took skating lessons on the hotel’s ice rink, which hosted ice shows and hockey matches. (A painting of skaters adorns the Grosvenor House lobby today.) The rink could be converted to a dance floor in two hours, but in 1934 it became a permanent ballroom, the largest hotel ballroom in Europe. Named the Great Room, its dance floor was the scene of high-society balls, fashion shows and show business banquets, attracting film stars like Robert Taylor, Ray Milland and Humphrey Bogart. The Beatles put on one of their first London concerts in the room.

In addition to the future queen’s skating, the royal family has had many connections to the hotel. The Queen Mother used to attend the Antiques Dealers’ Fair, an event still held in the Great Room, which is still the largest hotel banqueting space in Europe (20,454 square feet). And to this day the Great Room hosts a ball to mark the end of the Wimbledon Lawn Tennis Championships, when winners of the singles titles lead the dancing.

The Great Room served as the mess for U.S. Army officers in World War II; Generals Eisenhower and Patton were regular visitors. The hotel stayed open during the war, offering austerity menus, and was a center for air defense with its rooftop patrol system. Emerging from the war damaged and scarred, Grosvenor House underwent an immediate facelift to restore its reputation as one of the world’s great luxury hotels.

The hotel had six owners between 1996 and 2004. Restored to its former glory after a four-year, multi-million-dollar restoration, it opened in 2008 as the JW Marriott. 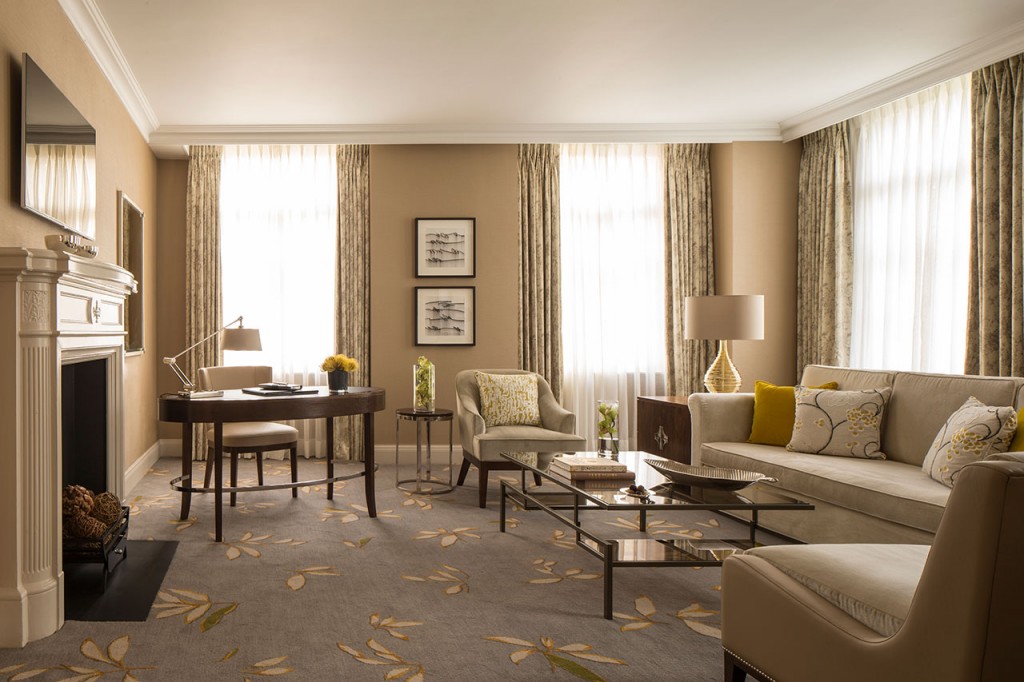 While guests may not be able to poke their heads into the Great Room—unless they’re attending a gala event there—they can soak up the luxury in other public rooms. From the Park Room, the main lounge, they have views of leafy Hyde Park and bustling Park Lane while relaxing over cocktails, breakfast or an elaborate afternoon tea with a three-tiered serving tray offering delicate finger sandwiches, freshly baked buttermilk scones with Devonshire clotted cream and Cornish strawberry jam, and exquisite cakes and pastries. Attached to the Park Room (getting a makeover this year) is the wood-paneled Library Bar, a cozy space complete with bookshelves. The hotel’s famous Red Bar, with its bright red walls and upholstery, is a chic place for drinks and often used for fashion shoots. 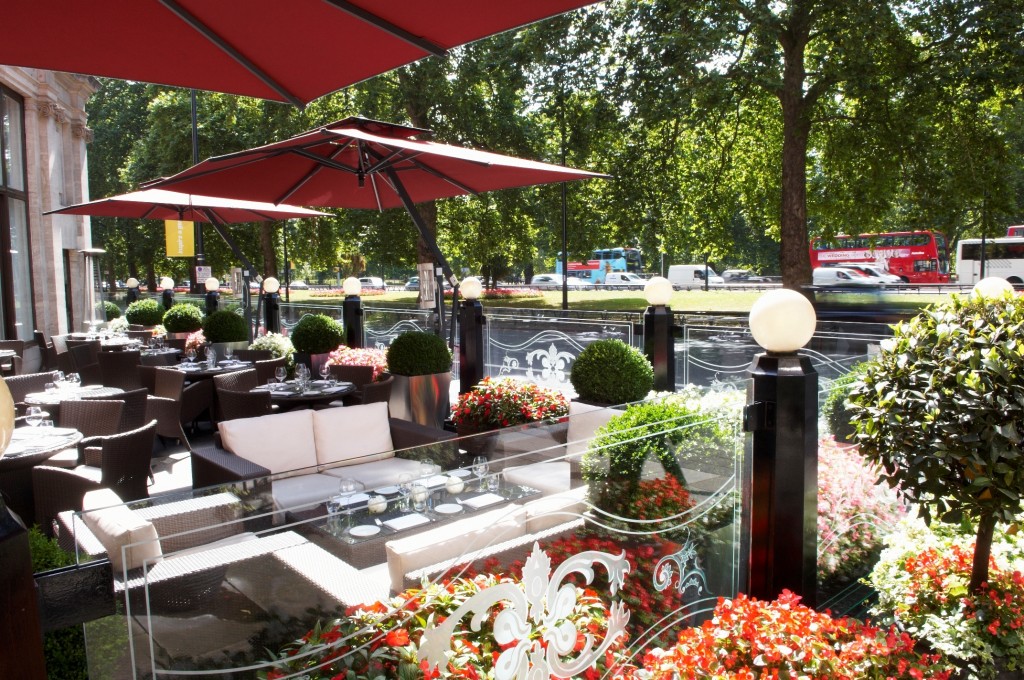 JW Steakhouse, London’s leading American steakhouse, features the finest cuts of American USDA beef and select, hand-cut selections of Aberdeen Angus. Its signature steak is the 32-ounce, on-the-bone ribeye named “The Tomahawk.” Other menu favorites include Maryland-style lump crab cakes, line-caught cod fish and chips and pan-seared Scottish salmon. Side dishes include towering onion stacks, a twice-baked potato and bourbon sweet potato mash with a marshmallow crust. JW Steakhouse is open for breakfast, lunch and dinner. Its Bourbon Bar offers an impressive selection of single-barrel and small-batch Kentucky bourbons. Signature cocktails include The Mint Julep and Kentucky Bourbon Sour. Grosvenor House recently joined forces with Jim Beam to offer the first ever Jim Beam single barrel bourbon to be hand-selected and exported from the U.S. to anywhere in the world.

Since Mayfair is largely residential, the streets are quieter than others in central London, and there are few high-profile sights that draw hordes of tourists. It’s a good place for strolling and taking in the privileged atmosphere. One inviting spot is Shepherd Market, a village-like hodgepodge of shops, restaurants and atmospheric Victorian pubs (like Ye Grapes, circa 1882). Centered around a small square fed by little alleyways, it’s a tucked-away gem. It’s also fun poking into high-end antiques shops and art galleries, and perusing the astronomical prices of local listings posted at real estate offices.

Casual wanderers like reading the blue-and-white plaques affixed to the buildings where famous people lived, and Mayfair has had more than its share of notables, from novelist William Somerset Maugham to composer George Frederic Handel (whose home is now a museum). Take a rest from exploring in Berkeley Square, a green oasis worth contemplating from a park bench.

For a taste of the good life in London, a stroll through Mayfair—with a stay at Grosvenor House, A JW Marriott Hotel—is a good place to start.