Golfers are hitting the links across the world in record numbers

While most of the tourism sector has spent the past three years recovering from the damage inflicted by the pandemic, the venerable sport of golf has experienced a different fate.

After initially being staggered in 2020 by the impact of the COVID-19 virus, golf enjoyed an impressive surge during the second half of 2020. That growth continued throughout 2021 as the National Golf Foundation reports more rounds of golf were played at courses across the country than at any time in history. And that number figures to grow entering 2023.

In 2021, according to the NGF, 25.1 million Americans played on a golf course, a net increase of about 300,000 golfers from 2020. That 2021 number swells to 37.5 million Americans when off-course driving ranges, simulators, or entertainment venues like Topgolf are added to the mix.

These statistics are even more encouraging when one factors in the number of women and newcomers who are hitting the links. In 2021, of the 25.1 million who played golf on a course, more than 6 million were women, a number that has risen substantially over the past five years. Similarly, in 2021, a record 3.2 million played golf for the first time. This comes on the heels of more than 3 million making their golf debuts in 2020. Both numbers topped the previous high of 2.4 million new golfers in 2000.

Golf’s growing popularity is promising news for travel planners seeking to rebuild after a cataclysmic 2020 and 2021. Golf travel, which already does a hearty $20 billion of business in the United States, appears poised to improve on that number in ensuing years.

According to a recent survey of “core golfers” by the NGF, almost 80 percent said they are planning to take a dedicated golf trip this year. This number is a sizable increase from a year ago when around 66 percent of participants (nearly 13 million Americans who play at least eight rounds of golf per year) said they were planning a golf trip. Along those lines, an NGF survey of 75 U.S. resort facilities shows advance bookings for golf trips are up 12 percent over the same period from last year and almost 20 percent above the pre-pandemic days. 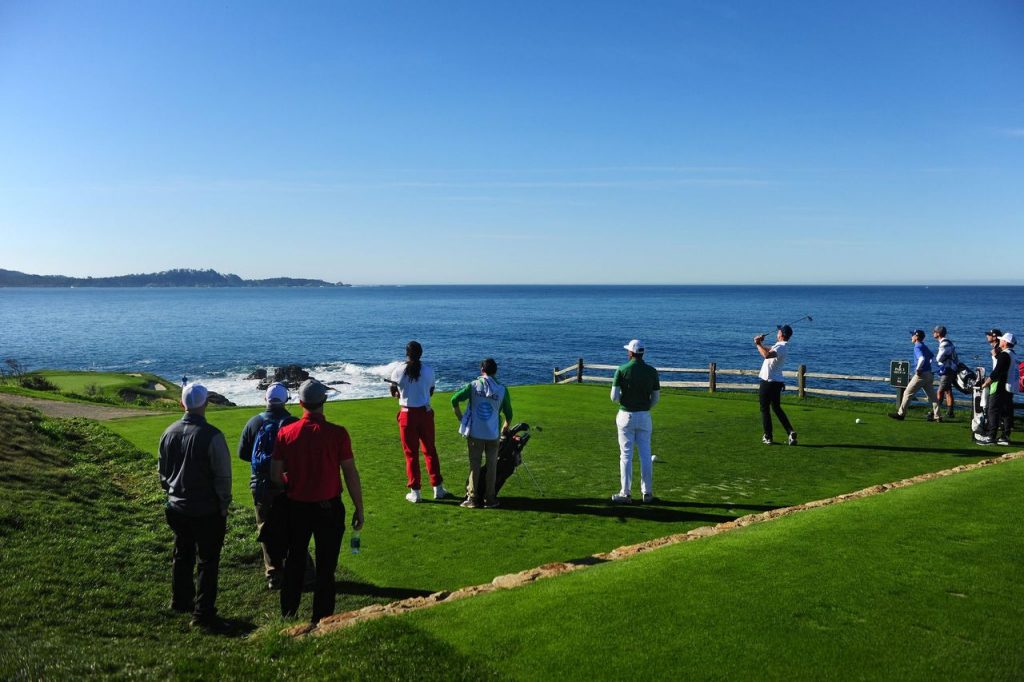 Pebble Beach Golf Course is one of the most popular courses in the world. Credit: Steven L. Shepard

Even sky-high fuel prices, which reached a national average of $4.009 for a gallon of gas this year, haven’t deterred golfers. Almost 60 percent of golf trips involve golfers hitting the road by car, but driving destinations like Big Cedar Lodge in the Ozarks of Missouri, reports advance bookings for 2022 are similar to 2021.

Nothing, it appears, can keep golfers from their desired course. And considering there are more than 38,000 courses in the world in 209 different countries (85 percent of the world), that’s a healthy number of prospective travelers.

Of those 38,000 courses, more than 16,000 can be found in the United States, with the top states for golf being California, Florida, and Oregon. Those states are home to the most Top 100-ranked courses in the country, with California sporting a robust 10 top-ranked courses.

And while rankings vary depending on where you look, it’s generally accepted that Pebble Beach in California, Pacific Dunes in Oregon, and TPC Sawgrass in Florida are among the best courses in the world. Best of all, these fabled courses are open to the public.

One such example of a healthy golf market is the United Kingdom, where some of the UK’s top golf venues are selling out both this year and in 2023. Gordon Dalgleish, who runs U.S. tour operator PerryGolf, told CNBC he’s never seen such demand from Americans wanting to play upscale courses in Britain, such as the Old Course at St. Andrews in Scotland. In fact, PerryGolf has almost sold out of 2023 spots to play the Old Course, which is considered the oldest and most iconic golf course in the world.

In 2021, of the 25.1 million who played golf on a course, more than 6 million were women, a number that has risen substantially over the past five years. Credit: Photo by Stefan Waldvogel via Pixabay.

Golf tourism represents the largest sports-related travel market and is considered one of the best ways to boost tourism. This stems largely from the fact golf tourists often have higher average spending than other tourists, with golf travelers spending an average of 2.5 times more than leisure tourists. Only 25 percent of that is reportedly spent on golf.

The National Golf Foundation also found that while the average length of a trip of a domestic visitor is 3.6 days, a golfer stays an average of 4.6 days. This number is even more pronounced with overseas golf travelers who stay a minimum of seven nights according to a survey conducted by Golf Travel Consulting.

In other words, golf travel is big business. And it’s getting bigger by the day.