A trip to India may not be everyone’s cup of tea, but tour organizers on a recent Globus FAM trip to Delhi, Agra and Jaipur say it’s a superb destination for the right traveler.

“The type of traveler who would do well in India is someone who’s likely traveled a fair bit already and can handle the assault on the senses,” said Ralph Velasco, a California-based photography instructor who leads photo tours to places like Egypt and Cuba (photowalkingtours.com). “To me it’s all about setting expectations, too, so I’d really be honest with those interested in joining me about what they could expect. It’s not easy travel, so it’s not for everyone, but I think for many people India shouldn’t be missed.” 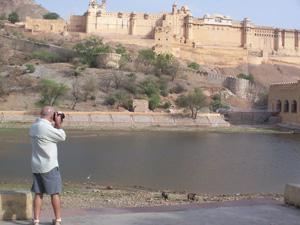 Ralph Velasco at the Amber Fort, near Jaipur, India

Patti Beth Anderson, owner of Good to Go! (goodtogowithpb.com) in Grove, Okla., agrees that India is for the seasoned traveler.  She recommends that travelers do in-depth reading in advance to learn about the Hindu and Muslim religions. She adds, “I wish I had watched suggested movies on Gandhi and other historical films that could have given me some framework in which to hear our guide’s comments.”

Amparo Fernandez, of G-Tours in Costa Mesa (Calif.), said, “I really enjoyed India in all its aspects…. India appeals to those looking for beautiful places and interested in different styles of life. Anyone with an interest in history would also be attracted to India, she said, noting that it is “an expensive trip and a long distance from here.”

Good to Go’s Anderson, describing her interactions with people, said, “They were as curious about the white-skinned tourists as we were about the brightly draped people we met. I found myself being a favorite photo subject as families lined up and nonverbally asked to take my picture individually with each family member. It became comical—my fair skin had them sneaking cell phone pictures like I often do of the locals when traveling.”

Finding beauty in simple things, the Oklahoman marveled at the way shopkeepers “would carefully arrange their fruits or vegetables into an artistic stack that defied gravity, and it was so appealing to the eye amidst the yellowed newspaper and dirty straw and board that were part of the display.”

Asked what he personally liked about India, Velasco said, “As a photographer I loved the vibrant colors, friendly people, wonderful architecture and impressive sites that we saw. The food was outstanding, and the incredible history and culture were absolutely beyond what I even expected. I certainly remember the heat (in June), but this wouldn’t be an issue in the November-to-March time frame I’d try to plan my trips.”

Because of the distance and expense of a journey to India, he said a tour of 10 to 14 days would be best.

FAM trip participants universally called India a land of great contrasts. Said Anderson: “Ultra-modern buildings rise up on the same stretch of road where homes are using cow dung for cooking fires. Hotels offer pampering in their pools, hot tubs and saunas a stone’s throw from where locals are beating clothes on rocks to wash them.”

With the constant honking of automobile horns and commotion of people and animals, “it’s overstimulation at every turn,” Anderson said.

For information on Globus’ 14-day “Secrets of India” tour (from $2,929, plus air), visit globusfamilygroups.com. The trip involves travel by bus, train and plane. Featured on the itinerary are Delhi, Agra, Jaipur, Varanasi, Udaipur and Ranthambore National Park, famed for its tigers. A four-day South India extension is available.