How does Nebraska figure into your next getaway? From one end of the state to the other, you’ll find worthwhile attractions, inspiring natural beauty and rich history with an authentic American flavor you’ll find nowhere else.

As you make your way across Nebraska, your surroundings constantly transform—from spectacular rock formations to wide-open prairies to scenic rivers and lakes. Nebraska’s state parks and recreation areas provide a bounty of outdoor adventure, including hiking, biking and water sports.

Experience miles of renowned bike trails and hiking paths that wind through scenic splendor. The wonders of the landscape come to life on Nebraska’s pathways. One of the state’s premier destinations for trail seekers is Chadron State Park, nestled in the picturesque Pine Ridge. Mountain bikers come from far and wide to tackle the trails, and hikers are rewarded with an exhilarating experience—physically and visually. Another amazing stop is Toadstool Geologic Park north of Crawford where an unexpected, lunar like terrain enchants hikers.

Even without a coast, Nebraska claims an abundance of wet and wild fun along its waterways. The Niobrara National Scenic River is one of the most versatile destinations for water recreation. Explore the river via tube, kayak or canoe. Try navigating the snaking Loup River the good old Nebraska way: a floating livestock tank filled with friends and fun. Or hit the eastern stretches of the Platte River via air boat for a fast-paced adventure along picturesque shores. 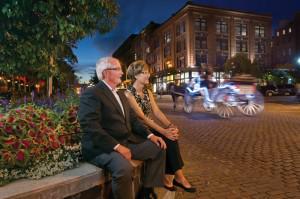 Voted the best zoo in America by Reader’s Digest, Omaha’s Henry Doorly Zoo features the world’s largest indoor desert and the nation’s largest indoor rain forest. Just north of the zoo is the city’s newly revived downtown area. Soak up the area’s history in the Old Market while you shop an array of unique, modern stores and enjoy some of the Midwest’s most acclaimed restaurants.

One of the state’s most outstanding attractions is near Beatrice. Homestead National Monument of America brings to life the homesteading story and the impact of the 1862 Homestead Act on the nation’s settlement.

Fruit of the vine

It’s not surprising that a state with a knack for growing things is fast becoming known as a hot spot for wineries. After all, the jump from breadbasket to wine cellar isn’t such a big one.

Viticulturists across the state take advantage of fertile soil and ideal growing conditions to produce some very tasty varieties. Spend a pleasant afternoon touring the vineyards, tasting a variety of award-winning wines and purchasing a bottle or two of your favorites. Whether you prefer red or white, semisweet or dry, you’re sure to have a wonderful time.

Each spring, central Nebraska comes alive with the sounds and calls of millions of migrating birds. Between mid-February and mid-April, half a million sandhill cranes gather along the Platte River Valley as they make their annual migration north. 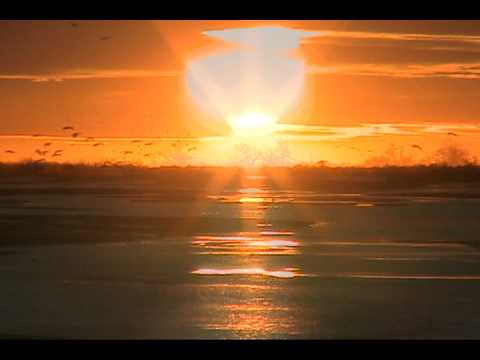 The Rowe Sanctuary and Iain Nicolson Audubon Center near Gibbon has exceptional educational displays and an indoor viewing area. Your group can also experience the beauty of the Platte River at the 12,000-square-foot interpretive center at the Nebraska Nature & Visitor Center near Grand Island.

The crane migration isn’t the only opportunity for birding in Nebraska. Hundreds of American bald eagles call the state home, and viewing these majestic birds in their natural habitat is definitely a sight worth seeing. A number of viewing spots, including many of Nebraska’s outstanding state parks, are located throughout the state.

More than 200 species of migratory birds have been identified in the Fort Niobrara National Wildlife Refuge east of Valentine. The refuge, which covers more than 19,000 square miles, is also home to the Great Plains bison, the black-tailed prairie dog, elk and other wildlife.

Nebraska played a central role in the trek of our country’s pioneers. And when your group travels to Nebraska, you can see firsthand the geological formations that guided waves of pioneers across the prairie. 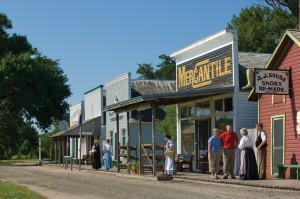 Stuhr Museum of the Prairie Pioneer

Visit Scotts Bluff National Monument for a glimpse into this storied past. Genuine wagon ruts and remnants of the Oregon Trail enable you to trace the steps of settlers who came before you. An even more recognizable landmark is Chimney Rock near Bayard. Visible from more than 20 miles away, the towering spire let weary travelers know they were on the right path.

The Stuhr Museum of the Prairie Pioneer in Grand Island, too, recognizes the state’s pioneering past with a living history experience like no other. In the summer months, Railroad Town—the museum’s own 1890s village—is buzzing with townspeople dressed in period clothing. The town depicts pioneer life with more than 60 original structures including shops, homes and barns.

Of course, you can’t talk about the Old West without mentioning cowboys. At the Buffalo Bill Ranch State Historical Park in North Platte, you’ll learn all about the life of one of the most famous cowboys, including his stint as a Pony Express rider, his famous Wild West Show and his scouting experiences.

Ogallala embraces its colorful Western past at Front Street, where you can catch the Crystal Palace Revue and Shootout, Nebraska’s longest-running summer theatre.

Your group can also explore the history and culture of the first Americans in northeast Nebraska. In Winnebago and Santee, you can visit the tribes . . . and even attend an annual powwow if you plan it right. Stop by the Ponca Tribal Museum in Niobrara or the Woodland Trails Arts Center in Winnebago for a double dose of American Indian culture.

If you’re looking for a one-of-a-kind experience, you’ll certainly find it at the Great Platte River Road Archway. Spanning Interstate 80 near Kearney, this award-winning museum tells the story of westward expansion through stunning audiovisual effects and three-dimensional displays.

Nebraska is filled with rare opportunities. Enjoy an eight-story view of the world’s largest railroad yard from the Golden Spike Tower in North Platte. And be sure to check out Carhenge near Alliance. The to-scale replica of England’s Stonehenge is made entirely of vintage cars.

Travelers can take a guided tour of Lincoln’s impressive State Capitol building, home of the nation’s only one-house legislative body. It’s Nebraska’s pride and joy and features many outstanding works of art depicting the state’s political and cultural development.

In addition, Nebraska is home to the world’s premier collection of mammoths and mastodons. Lincoln’s University of Nebraska State Museum of Natural History, also known as Elephant Hall, wows visitors with its massive fossil structures, the largest being a 14-foot male mammoth.

Turn on the charm

Nowhere is the juxtaposition of city and country so compelling as in Nebraska. Discover unexpected adventure along Nebraska’s nine scenic byways. These two-lane roads will introduce you to the diverse terrain, rich history, quaint attractions and genuine hospitality that are oftentimes found just around the bend.

For example, McCook offers excellent restaurants, shops and boutiques in one of the state’s most charming downtown districts. In Brownville, you can cruise down the Missouri River on the Spirit of Brownville, take in a play or concert, and browse the Brownville Lyceum—a book lover’s haven. And Fremont has a great selection of antique shops in its historic downtown district.

Another great stop is Nebraska City. The town’s centerpiece is the 52-room Victorian-style mansion at Arbor Lodge State Historical Park and Arboretum. The 260-acre Arbor Day Farm is a working farm orchard and forest that allows visitors to reconnect with nature.

Planning a group getaway to Nebraska is easy, so get started today. Simply check out the Group Travel Planner at VisitNebraska.gov, or contact individual destinations for information on group packages and planning.