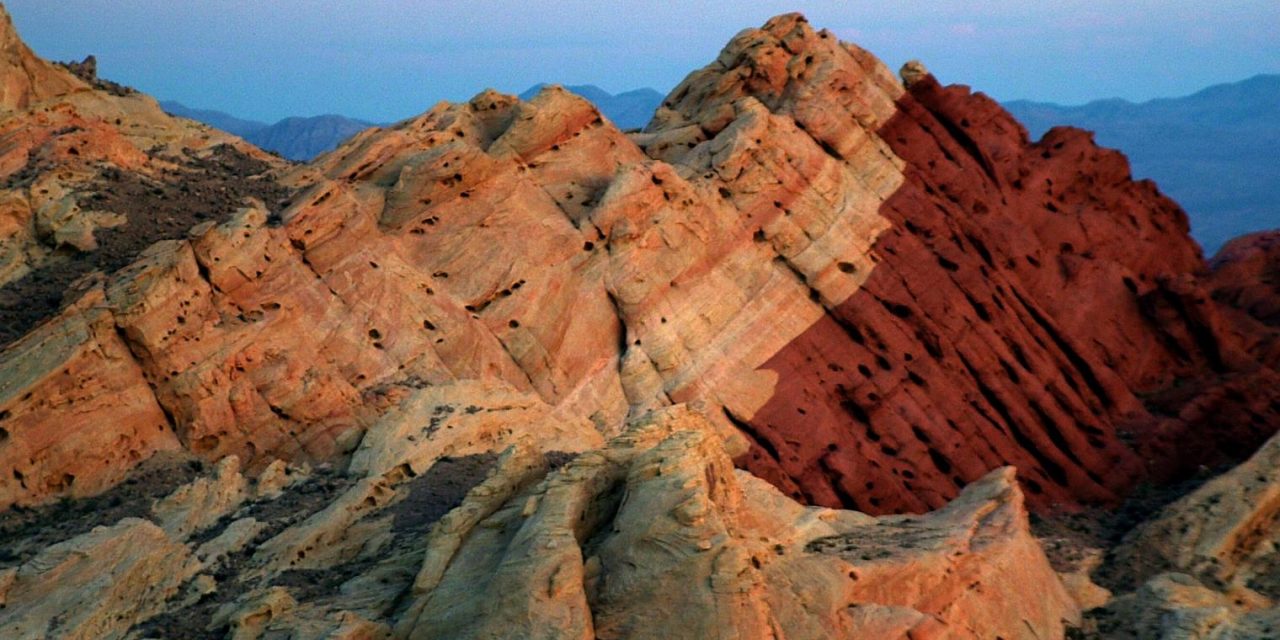 Tour planners understand that although the sights of the Las Vegas Strip provide 24-hour excitement, a little tranquility may be desired for a balanced approach to the area. Nature can provide the much needed relaxation. Groups can explore state parks, take a hike, even climb a mountain or two. Here are three prime areas to consider for a getaway from the city lights: 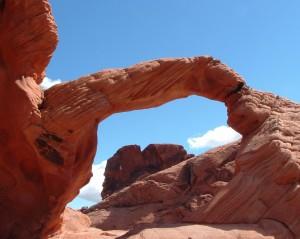 Arch at Valley of Fire

Just 55 miles northeast of Las Vegas via Interstate 15 lies Nevada’s largest state park with more than 35,000 acres of sweeping desert and an abundance of rock formations. Dedicated in 1935 to preserve the fragile nature of the desert, Valley of Fire derived its name from the 150-million-year-old red sandstone formations with its history spanning the dinosaur age to prehistoric people and later Anasazi Pueblo farmers. The area is dominated by desert brush, and there are several species of cactus. During the spring season visitors can marvel at the blooming desert marigold, indigo bush and desert mallow. A rare species to encounter is the desert tortoise, protected by state law.

The Visitor Center contains exhibits on geology, ecology and the history of the park and its surrounding area. Be sure to stop there first to pick up a map and general information.

White Domes, a sandstone formation with contrasting hues of white and reds, is one of the many picnic areas with a majestic view. Rainbow Vista is the No. 1 place to photograph the different sandstone. Visitors get a panoramic view of the canyons, domes, ridges and valleys. Fire Canyon is a 600-foot-deep gorge that provides a view of the dark red sandstone and geological features of Silica Dome, whose stark whiteness contrasts with the dark red rock.

The Lost City Museum in nearby Overton has exhibits of Indian artifacts. In addition, it has reconstructions of original pit dwellings and pueblos that were found in the Moapa Valley. Lake Mead National Recreation Area contains Lakes Mead and Mojave, an ideal place for camping, swimming, fishing, boating and picnicking. (www.parks.nv.gov/parks/valley-of-fire-state-park/)

Nevada’s first National Conservation Area, with more than 195,000 acres, is situated just 17 miles west of the Las Vegas Strip. Exploring this part of the Mojave Desert along the 13-mile scenic drive or hiking trails allows group visitors the chance to see burros, kangaroo rats, coyotes and many more species, including the rare desert tortoise. Along with the wildlife are vast examples of cultural resources, geological curiosities and plant life. More than 30 springs and natural catchment basins (known as tanks or tinajas) provide some cultural context. This ample water source allowed for the settlement of the area by agricultural groups such as the Patayan Culture. Other traces of previous cultures are the roasting pits, petroglyphs and pictographs found along the trails. The visitor center has exhibit rooms and a bookstore.

There are more than 20 hiking trails looping around and through the canyon. Moenkopi Loop, an easy two-mile hike that begins at the visitor center, allows groups to see triassic fossils and various desert flora along with the panoramic views of Wilson Cliffs. This route also has connecting paths to other trails such as the Calico Hills. The Keystone Thrust trail traverses a low ridge that leads into a small canyon where the gray of the limestone meets the red and peach of the sandstone. The Ice Box Canyon trail reveals seasonal waterfalls that involve some wall climbing to reach the upper pool and waterfalls, although the trail officially ends at the large ponderosa pine tree in the bottom of the canyon. A general path accessible to all is the Overlook Trail, a paved .25-mile round trip to view the natural beauty of Red Rock Canyon. Mountain and or road biking, plus horseback riding tours, are other activities available at the canyon. (blm.gov/nv/st/en/fo/lvfo/blm_programs/blm_special_areas/red_rock_nca.html) 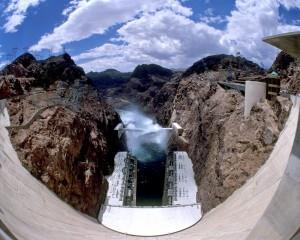 Located just 35 miles from Las Vegas near Boulder City is the second highest dam in the country, at almost 730 feet high. The 30-minute “Powerplant Tour” allows visitors a chance to understand the inner-workings of the dam and includes a short film on the building and preservation of the dam. The tour, mainly inside, includes a 70-second elevator ride that takes you 530 feet down to where the tour begins. The Penstock Viewing Platform is where groups see the 30-foot pipes that transfer nearly 90,000 gallons of water each second and view a film that explains the dynamics of the pipes. From there a short elevator trip takes groups to the panoramic views from the 650-foot-long Nevada wing of the powerplant.

The “Dam Tour” includes the powerplant tour, allowing for a complete experience inside and outside of the dam. The Observation Deck provides stations that offer views of Lake Mead, Hoover Dam and the Colorado River. Also worth seeing is The Old Exhibit Building, which once housed soldiers during World War II, and the Nevada and Arizona Spillways, located on both sides of the dam. These are large collections of water big enough to hold a World War II battleship. (www.usbr.gov/lc/hooverdam/)