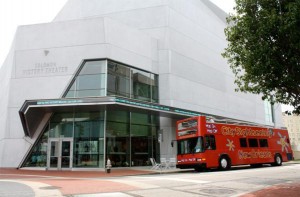 The venture’s premier route begins at Jackson Square and includes stops at the French Market, Bourbon Street, Basin Street Station, the Superdome, World War II Museum, Mardi Gras World and the Riverwalk, which gives passengers access to the Algiers Ferry, Aquarium of the Americas and IMAX Theater. The entire loop takes 90 minutes to complete, but passengers have the flexibility to disembark at any stop and spend as much time touring as they wish before reboarding the coach. Throughout the loop, live narration is provided by a tour host. Souvenir ear buds are provided free, allowing passengers to hear the narrative in Spanish, French, Portuguese, German, Italian, Japanese and Chinese. A Kid’s Club Channel will be available and for extra authenticity, a Cajun-accented version of the tour is even offered.

A second route, expected within two months, will cover Esplanade Avenue to City Park, uptown to the streetcar line with a ride on the streetcar included, Audubon Park, Audubon Zoo, St. Charles Avenue and Magazine Street. Long-range plans call for a dinner/nightclub tour. 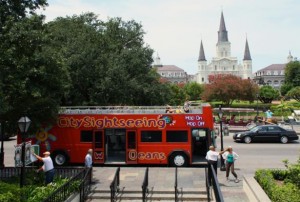 One-, two- and three-day ticket options are available for $40, $50 and $60 per person, respectively, and tickets can be purchased in advance online at www.citysightseeingneworleans.com, or from hotel concierges. Child, family and group rates are also available. Each ticket includes a free ride on the St. Charles Avenue Streetcar and free passage on the Algiers Ferry across the Mississippi River. Additionally, ticket holders can choose from packages that provide discounted admission to the National World War II Museum, New Orleans Museum of Art in City Park, New Orleans Botanical Garden, Audubon Zoo, Aquarium of Americas and more.