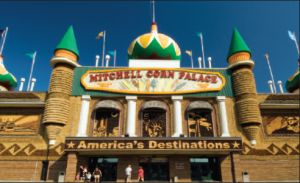 Carved into a granite peak in the Black Hills of Western South Dakota, it’s been called the “Shrine of Democracy” ever since the phrase was coined during the 1930 dedication of George Washington’s head. His 60-foot-high visage was followed by the chiseled faces of three other U.S. presidents—Thomas Jefferson, Abraham Lincoln and Theodore Roosevelt— in a herculean, 14-year project undertaken by sculptor Gutzon Borglum and a team of 400 workers.

Mount Rushmore National Memorial, so much a part of our national identity, is almost a cliché. But even the most jaded come away in awe of the carving’s sheer size, its artistic splendor and the lofty ideals it embodies. Most inspiring is the patriotic pageantry on summer nights in the amphitheater, when a ranger talk and stirring movie are followed by the playing of the National Anthem and floodlighting of the faces, stark white against the starry Dakota sky. Touched emotionally, many leave with a tear in their eye or a lump in their throat. Even as you depart, you’ll find yourself glancing back for one final look.