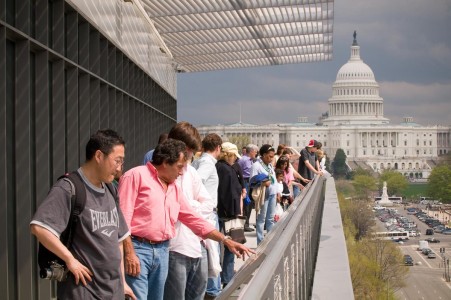 Just as Cabinet officials and members of Congress come and go, the tourism scene in Washington, DC seems to be as fluid as the political landscape. Nothing is static in the Nation’s Capital. Most first-time visitors are fixated on the time-honored attractions, but for repeaters there’s always something fresh and lively on the horizon.

Groups visiting the National Mall this year will witness something that hasn’t been seen since 2011—the Washington Monument without its scaffolding. The hallowed landmark reopened May 12 after being closed for three years because of damage caused by an earthquake that occurred 84 miles southwest of Washington. The quake created more than 150 cracks in the 555-foot marble obelisk built in honor of George Washington. Congress allocated $7.5 million to the restoration project; an equal amount was donated by Washington businessman and philanthropist David Rubenstein.

The iconic attraction typically welcomes about 700,000 annual visitors, who take the elevator or climb the stairs to the observation deck. Completed in 1884, the Washington Monument was the world’s tallest structure for five years until the Eiffel Tower was built. A public elevator was installed in 1888.

Among the $540-million museum’s most captivating pieces are two so big that cranes had to lower them into the bottom levels of the building during the early stages of construction. One is an 80-foot-long railway car that had separate seating for whites and “coloreds.” Restored to its 1940s appearance, the Southern Railway car served routes in Kentucky, Tennessee, Georgia and Florida. Also telling a powerful story is the concrete guard tower from Louisiana’s Angola Prison, which, during the Jim Crow era, housed inmates in old slave quarters on former plantation land. Both items will be on display in the Segregation Gallery as part of the inaugural exhibition Defending Freedom, Defining Freedom: Era of Segregation 1876-1968.

A 19th century slave cabin from Edisto Island, S.C., headgear used in a gym by Cassius Clay (later Muhammed Ali), a red Cadillac from Chuck Berry’s collection and an airplane used to train African American pilots at Tuskegee Institute for service in World War II are among the many other artifacts at the only national museum devoted exclusively to African American history and culture.

The Newseum, a relatively new presence on the Mall, has emerged as one of the most popular tourist magnets in the Nation’s Capital. Last year it set attendance records, boasting a 5 percent increase in visitors over 2012, more than at any time during its five-year history on Pennsylvania Avenue. Don’t forget to visit the rooftop terrace for the best vista in Washington, DC.

A typical visit to the Newseum, with its 15 galleries and 15 theaters devoted to news-gathering and the five freedoms of the First Amendment, only scratches the surface. The interactive museum presents more than 27 hours of video and audio content, ranging in length from the four-minute “History of Newsreels” to 25-minute documentaries on “The Press and the Civil Rights Movement,” “Rise of TV News” and “The Press Box: The History of Sports Reporting.” Artifacts on display include a section of the Berlin Wall, twisted steel from the 2001 World Trade Center attacks and, in the FBI exhibit, items related to the past century’s most infamous crimes.

Baby boomers will be particularly interested in The Boomer List: Photographs by Timothy Greenfield-Sanders. His large-format portraits and interviews profile 19 iconic boomers, one born in each year of the baby boom (1946 to 1964). The Boomer List will come to life as an American Masters documentary film on PBS later in 2014, the year when the youngest members of the generation turn 50.

To mark the 150th anniversary of one of Washington’s most tragic events, the Newseum plans the spring 2015 exhibit Reporting Lincoln’s Assassination. It will feature the museum’s unparalleled collection of New York Herald special editions that report the April 15, 1865 killing.

Ford’s Theatre and its Center for Education and Leadership will commemorate Lincoln’s assassination with a number of events in 2015. The theater will present the world premiere of The Widow Lincoln, an emotional drama about the controversial Mary Todd Lincoln in the aftermath of her husband’s death. Freedom’s Song: Abraham Lincoln and the Civil War will be a concert-style musical featuring the words of Lincoln and music inspired by those who lived through the Civil War.

A special exhibition at the Center for Education and Leadership will commemorate Lincoln’s death with a hallmark exhibit that reunites—for the first time since April 1865—an extraordinary collection of artifacts that resided in Ford’s Theatre and on Lincoln’s person. Included will be the contents of Lincoln’s pockets, top hat and the blood-stained handkerchief he carried the night of his assassination. The exhibition is presented in partnership with the Smithsonian’s National Museum of American History.

Outside of Washington, in Prince George’s County, Md., the big news is a $925-million casino complex taking shape at National Harbor, a development currently anchored  by Gaylord National Resort and Convention Center and a Tanger Outlets mall. The MGM resort, slated to open in 2016, will feature an 18-story hotel overlooking the Potomac River, near the Woodrow Wilson Bridge.

Tour planners always want to know what’s coming up around the bend, and staying up-to-date with developments in the Nation’s Capital will keep them on their toes.