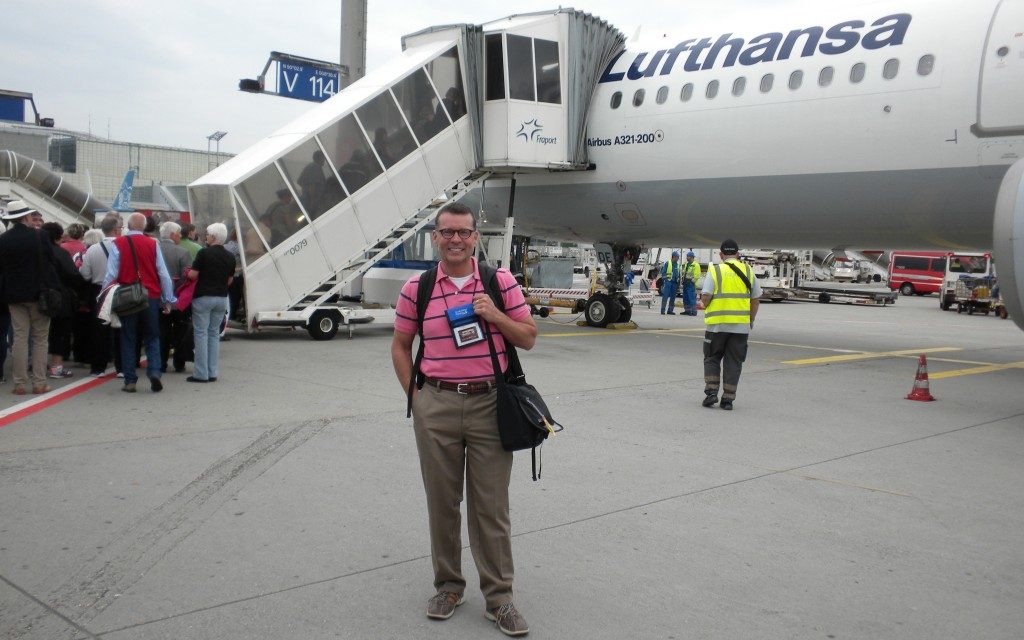 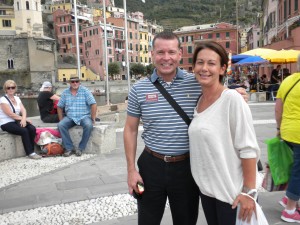 Some people are lucky, others are good. A select few are both. Clayton Whitehead is one of those individuals. This architectural history major stumbled into the tourism biz because he missed a meeting. From there, his talent for making people smile kicked in and he’s parlayed this into a successful career and lifestyle.

The self-described “#2” at Sacramento-based Sports Leisure Vacations enjoys being the face of this bellwether group tour company while he splits time between California and his beloved Savannah, Georgia. I caught up with Clayton between sips of sweet tea for this latest edition of Take 5.

Take 1: Tell me how you got started in the tour business.

I missed a club meeting!  It was 1981 and I was a freshman at the University of Georgia and a member of Alpha Phi Omega. The VP of the school reached out to us to provide volunteers to start an on-campus group of tour guides who would show around prospective students and visiting alumni groups. My brothers knew I was from the area, knew the campus and loved history, so they signed me up. In short order I was running the tour program for the school. By my junior year, I was doing outbound tours for alumni groups. Upon graduation in 1985, the Athens Convention and Visitors Bureau offered me a full-time job to continue my work as a local step-on guide as well as promoting outbound tours under their umbrella. I worked for them seven years and I owe EVERYTHING to my mentors in Athens.

Take 2: What makes a good tour?

You mean other than having me as the escort? Seriously, Sports Leisure’s operational model is “cradle to grave.” This is what attracted me to leave my beloved home and move 3,300 miles away to continue my career path. I’m allowed to create the tour, market the tour, then lead the tour. I can’t imagine creating a wonderful tour package, then giving it to someone else to operate. Likewise, I never want to escort a program I didn’t create. I’ll admit it – I like to micromanage. But a tour program is small enough that it can be micromanaged without it driving you nuts!

Savannah’s on the coast and in the South, so our best offerings are definitely fresh seafood prepared Southern style. That means FRIED!  But because I was raised in North Georgia, I’ll confess my favorite “seafood” is actually catfish. Sacramento is an entirely different ballgame. Temperate weather and fertile soil means fresh fruits and veggies year-around. We’re also an extremely ethnic community with restaurants featuring the fare of every culture you can imagine. I’m especially drawn to Asian fusion and good old Mexican food.

Take 4: What’s the best opportunity in the tour business today?

I don’t believe the motorcoach group tour is going the way of the dinosaurs. However, I do believe we have to evolve and innovate to remain relevant in an ever-changing marketplace. I live by the motto, “This ain’t your granny’s bus tour.” Don’t miss the point in the poor grammar. Today grannies – make that mature adults – don’t want to travel like their grannies did.  They want vacations that are actually restful. We don’t run the groups from 6 a.m. to 8 p.m. daily, but rather have group activities in the mornings, then leave the afternoons and evening for personal interests. Some are guided, some are not. And we offer options . . . LOTS of options.  What would you like to do this morning? Walking tour or driving tour? Yes, we’re offering both!  (I’ve got a driver and myself. Why not utilize our talents and head off in two different directions? Maybe I hire a local guide or pull in a local friend to offer three different choices!) This afternoon you’ve got countless options: Shopping, museums, spa activities. Some come at a cost.  Some don’t.  Some I will absorb.  Of course, I’ve not lost track of the reality that some people come on a group tour because they don’t want to be alone or are uncomfortable alone. These free afternoons don’t mean the tour escort is off the clock. I try to anticipate which option will be most pleasing to my more needy travelers, and when I’m announcing the options I’ll say, “And here’s the one I’m doing, and I hope some of you will join me.” 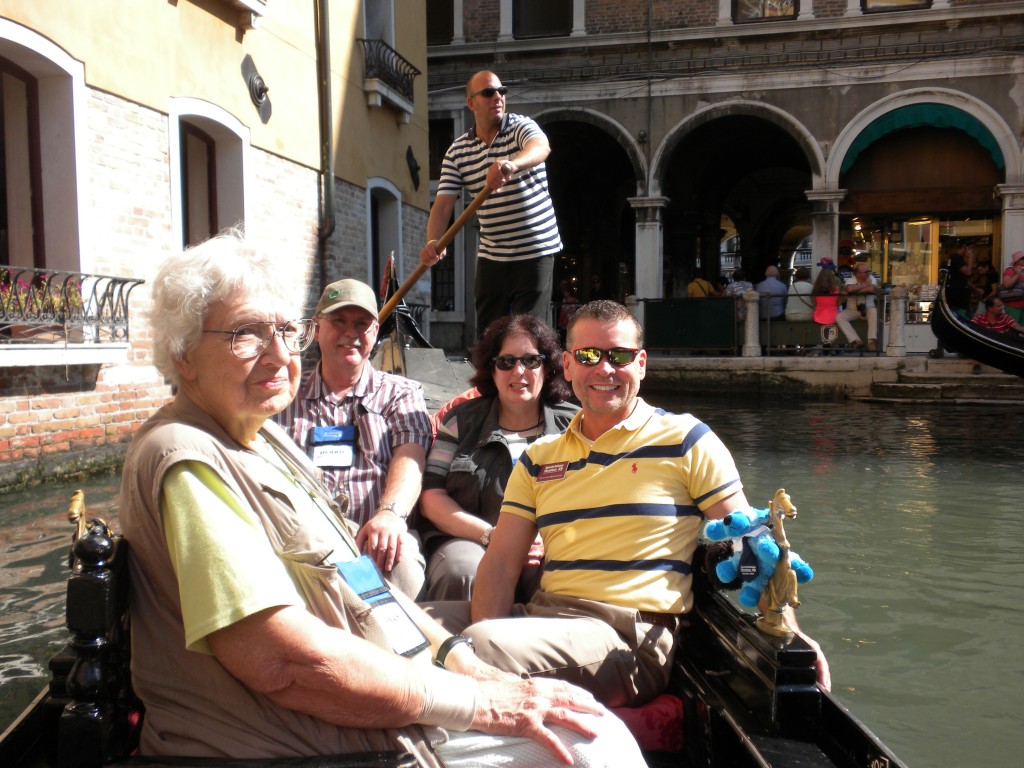 Riding a Gondola in Venice

Take 5: You’ve escorted a lot of your own groups. Ever lost someone?

I will never forget dear Mr. and Mrs. Bacon. It was a Caribbean cruise. She liked to shop.  He didn’t. They were portside in Nassau shopping on their own, and I guess he complained one time too many. She told him to sit down on a park bench and not to move until she returned for him. He did as he was told. After shopping she went back to the ship with all her packages and forgot about her husband. She didn’t realize he had missed the boat until it sailed. She didn’t want to confess to what had occurred, so at dinner when the group gathered she said he wasn’t feeling well. He still wasn’t feeling well at breakfast or dinner the next day, but she insisted he didn’t need a visit by the tour escort or the ship’s doctor. The escort took her word for it, sent his best wishes and gave them their privacy.

It took poor Mr. Bacon two full days to remember who he was traveling with and call the office. I took the call. “My wife told me to sit on this bench until she returned for me, but I think I may have missed the boat.” “When did she tell you that, sir?” “Two days ago.”

Chuck rushed to their stateroom and knocked on the door. Mrs. Bacon answered. “Where is your husband?” Chuck demanded. She burst into tears. “I can’t remember where I left him.” Oh, but the story isn’t over yet . . .

Meanwhile I made arrangements for him to meet the ship. There are few if any interisland flights – everything goes through Florida. So I flew him from Nassau to Miami to Grand Cayman. His flight was late and he missed the boat. The next day was at sea, and the following day the cruise ended in Ft. Lauderdale. So I flew him back to Florida and got him a hotel where he awaited the group’s return. Chuck said he was standing on the dock as the ship came in. He and his wife had some choice words for one another upon their reunion.

They never traveled with us again . . .

Clayton confessed to me that if he had to start over again in tourism, he’d follow his childhood dream and become a cruise director. That’d be a huge loss for the tour industry, and lucky for all of us, except maybe the Bacons.