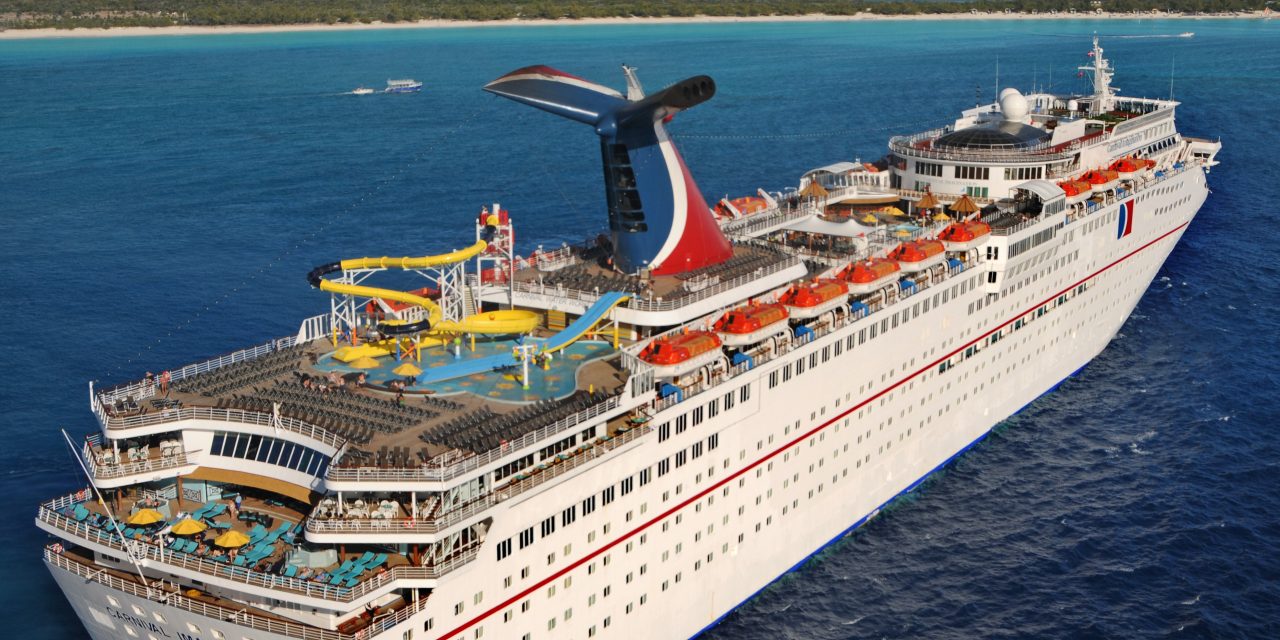 Nothing but blue Pacific waters stretched toward the horizon as I enjoyed breakfast on a terrace of Horizon Grill & Bar, the Lido Deck restaurant. And nothing but free time lay before me on this lazy day at sea, the relaxing finale of a short cruise from Long Beach, California.

The ship was the Carnival Imagination, the four-day itinerary—with stops at Catalina Island and the Mexican port of Ensenada—as uncomplicated as my day ahead.

Though I had been on many Caribbean cruises, the Pacific was rather new to me. There just aren’t that many choices from the West Coast, especially short sailings for those with limited time or budgets. Carnival Cruise Line’s 2,056-passenger Carnival Imagination and sister Carnival Inspiration offer three- and four-day outings from Long Beach year-round. As with many cruises under a week long, these mid-size ships are not the most glamorous in the fleet, but, to me, the 23-year-old Imagination was sparkly new. During a dry dock in September 2016, the Imagination underwent a makeover that included new food and beverage venues the line has been adding to vessels across the fleet. 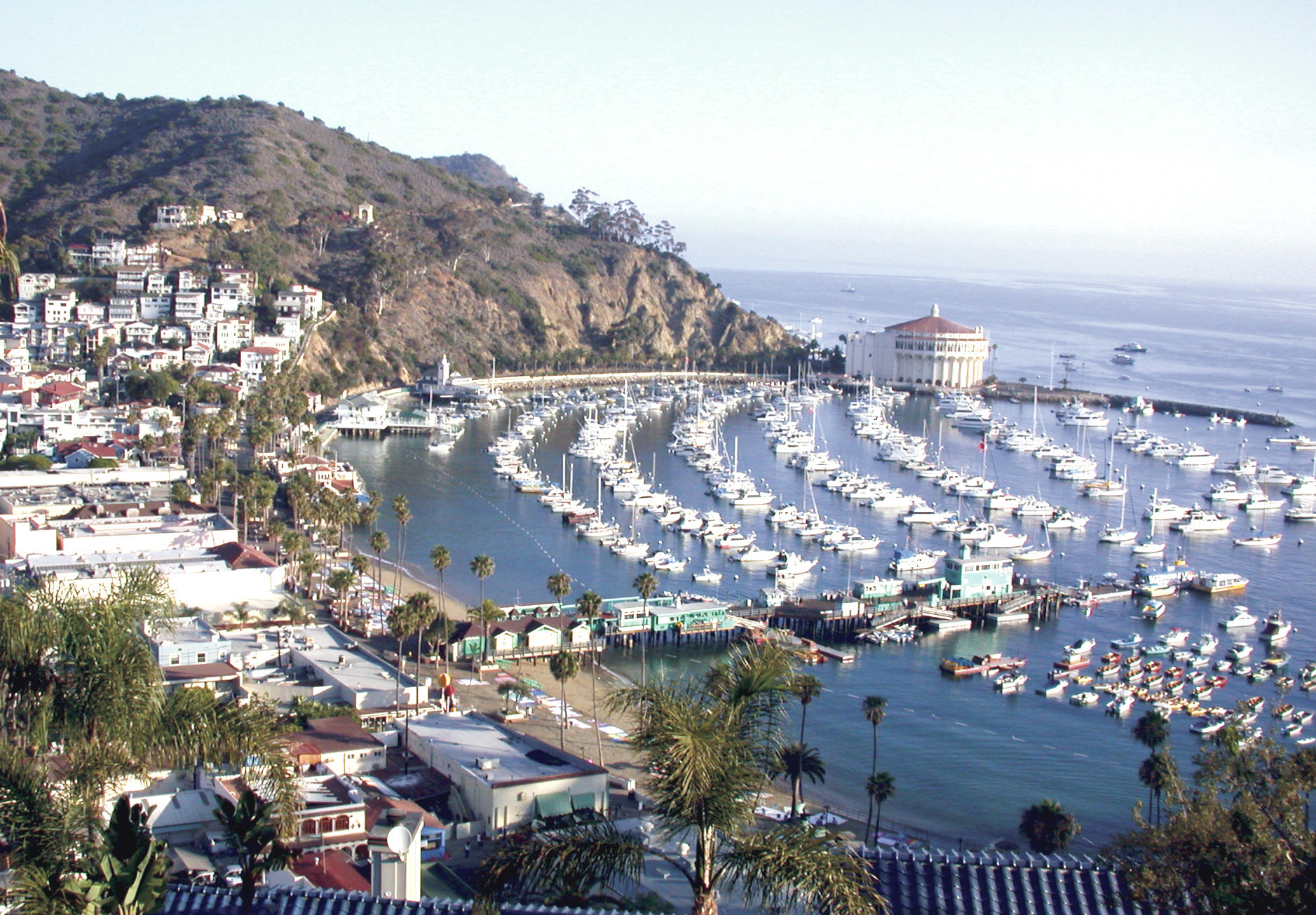 The Long Beach Cruise Terminal, operated by Carnival since 2003, is a story in itself. A distinct feature of the harbor, the building encompasses the world’s largest, free-span geodesic dome, once the showcase for Howard Hughes’ Spruce Goose, the largest wooden airplane ever constructed. Though the plane is now housed at a museum in McMinnville, Oregon, a replica hangs in the cruise terminal as a nod to its former tenant, as does the model of the plane used in the 2004 movie The Aviator. After a renovation and expansion unveiled earlier this year, Carnival now utilizes 100 percent, up from a portion, of the white-domed structure.

Getting to the terminal from Long Beach Airport is an easy 20-minute drive, but for me, it was just matter of rolling my luggage across the parking lot of the adjacent Queen Mary Hotel, a former ocean liner where I had stayed three nights before the cruise. I called this vacation my two-ship trip.

Our first port of call was less than 30 miles southwest of Long Beach. Catalina Island, part of Los Angeles County, proved to be my perfect day in paradise. With its vintage charm, small-town friendliness, colorful buildings, pretty flowers, a picture-postcard harbor and temperatures in the low 70s, there was nothing not to like. Catalina’s connections to the golden age of Hollywood sealed the deal, as did its history as the former spring training location of baseball’s Chicago Cubs, my team. Go Cubs! 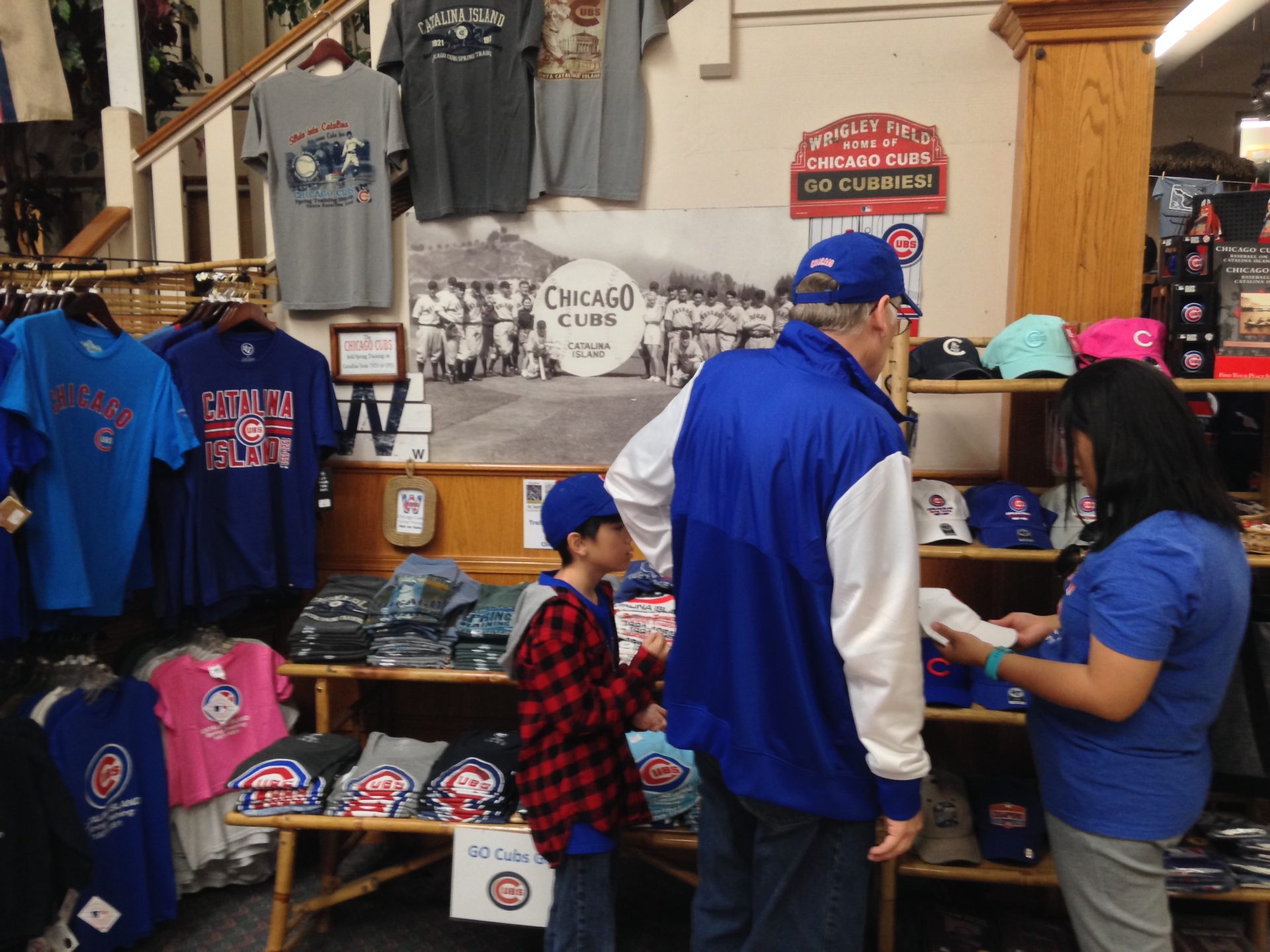 The Wrigley family, which owned the Cubs for many years, also owned Catalina, and examples of its influence on the island popped up frequently as I explored on my own and during an open-air bus excursion booked through Carnival. On the 1½-hour tour, Meriam, our bubbly driver/guide, told us that chewing-gum magnate William Wrigley Jr. purchased the island sight unseen in 1919. Wrigley’s Catalina Island Company was responsible for the island’s development as a resort and center for sportfishing. Most of the island today is in its natural state, with 88 percent owned by the non-profit Catalina Island Conservancy. The main town is Avalon (population 3,800), where continuous tenders from the Carnival Imagination, anchored offshore, operated until 4 p.m.

My “Avalon Scenic Tour” took us into the hills high above town, offering great views of the harbor and skirting the former Wrigley Mansion, which is now the six-room Inn on Mount Ada. But the highlight was a 20-minute visit to the Casino, a cylindrical building on the waterfront and the symbol of Catalina Island. Built by Wrigley in 1929, it’s a combination movie theater and ballroom, not a place for gambling. (Its name comes from the Italian word “casino,” which means “place of gathering for entertainment.”) The Art Deco jewelboasts the world’s largest circular ballroom and was popular during the Big Band era. Beneath the room’s wooden floor is a domed, 1,000-seat theater, the first one acoustically equipped to show talking pictures. Our group had a brief tour of the theater foyer and then sat for Hollywood’s Magical Island – Catalina, which included film clips of John Wayne, Jimmy Durante, Johnny Weissmuller, Errol Flynn, Bing Crosby, Marilyn Monroe and other stars who frequented the island in the 1930s, ’40s and ’50s.

Besides my tour, Carnival offers 24 other Catalina Island shore excursions.  A few venture into the heart of the rugged interior, with chances to view bald eagles, mule deer and members of the island’s bison herd. Glass-bottom boat tours are another option. Active types can go golfing, scuba diving, snorkeling, parasailing and kayaking.

Crescent Avenue, a pedestrian strip running along the downtown waterfront, abounds with gift shops, art galleries and eateries. A clothing store called Island Threadz had just what I was looking for—Cubs T-shirts recalling the spring training era on Catalina (1921-1951). 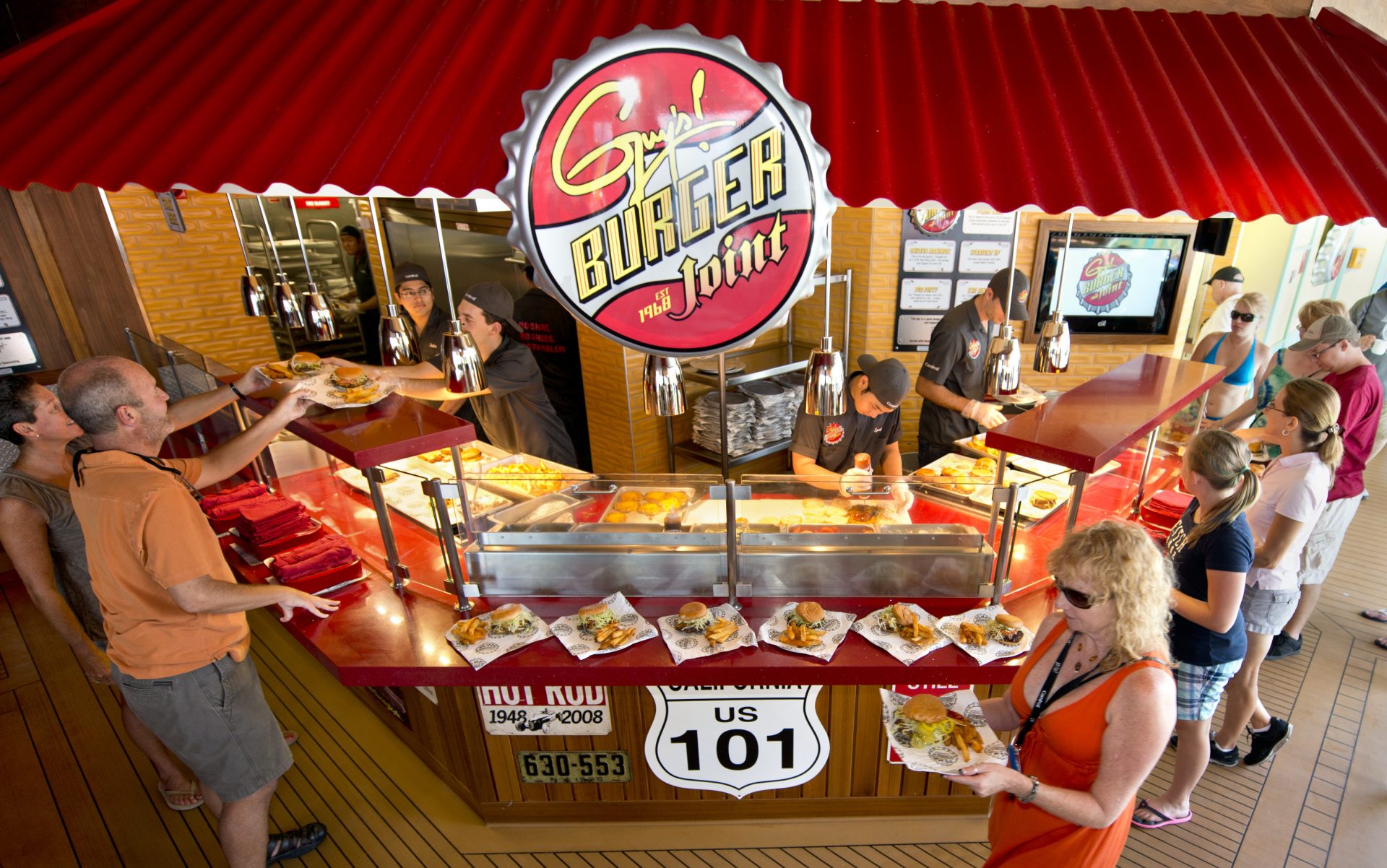 Guests on the Carnival Imagination indulge in an all-American meal of burgers and fries at Guy’s Burger Joint. (Photo by Andy Newman/Carnival Cruise Line)

After buying two Cubs shirts, I had to say good-bye to the tidy little island and hop a tender back to the ship, where a late lunch awaited. My choice was Guy’s Burger Joint, a free-of-charge poolside venue developed in partnership with Food Network personality Guy Fieri. The burger and seasoned fries were among the best I’ve had anywhere.

In Ensenada, rather than taking a tour, I just poked around town, a 10-minute walk from the pier, splitting up morning and afternoon explorations with lunch back at the ship. 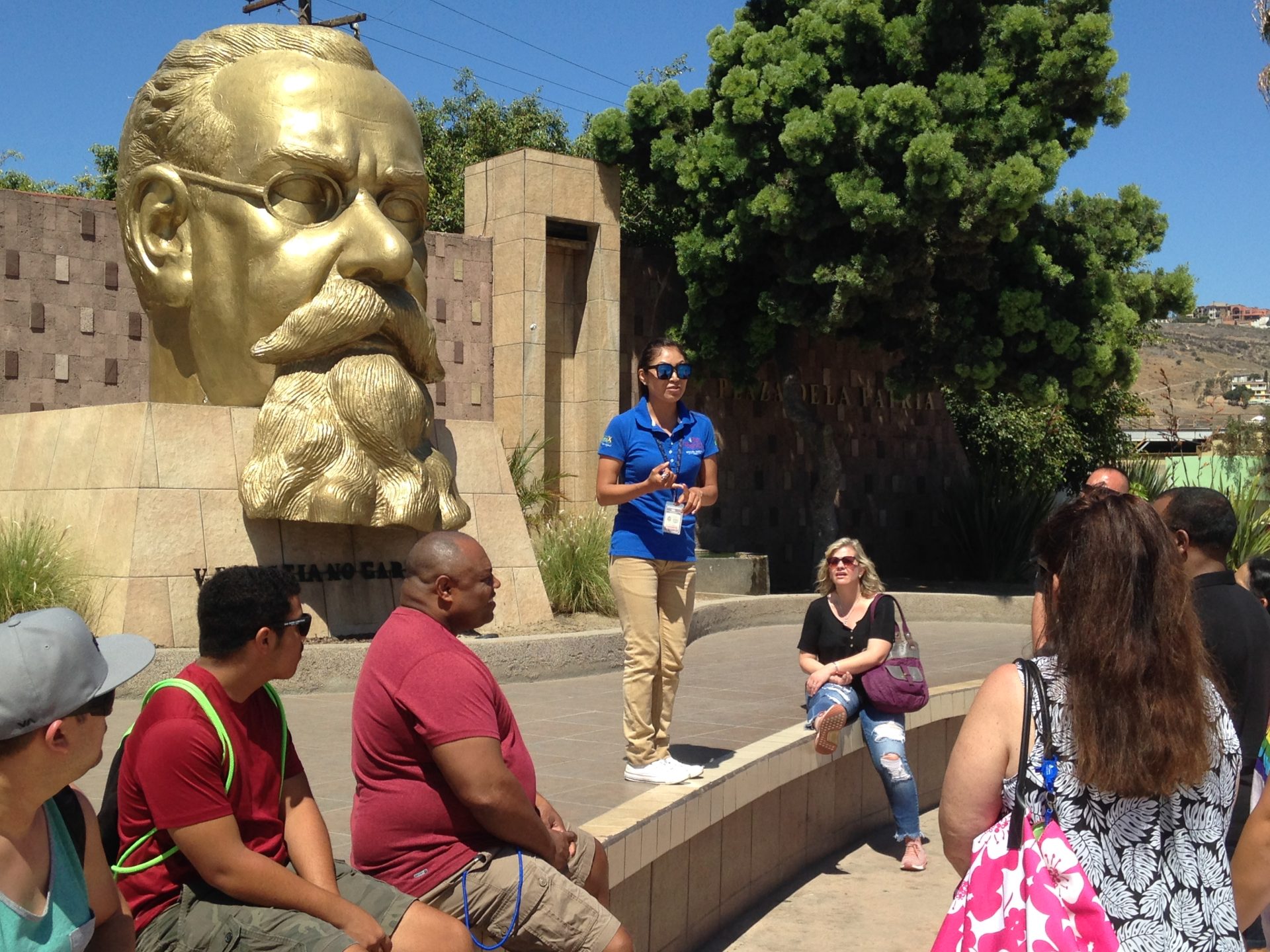 Carnival passengers on a tour in Ensenada learn about heroes of Mexican independence. (Randy Mink Photo)

Before hitting the shops, I checked out Plaza Civica, a square dominated by huge golden busts of heroes of Mexican independence—Benito Juarez, Miguel Hidalgo and Venustiano Carranza. There, I ran into a Carnival tour group, so I listened to the guide as she expounded on Mexican history. 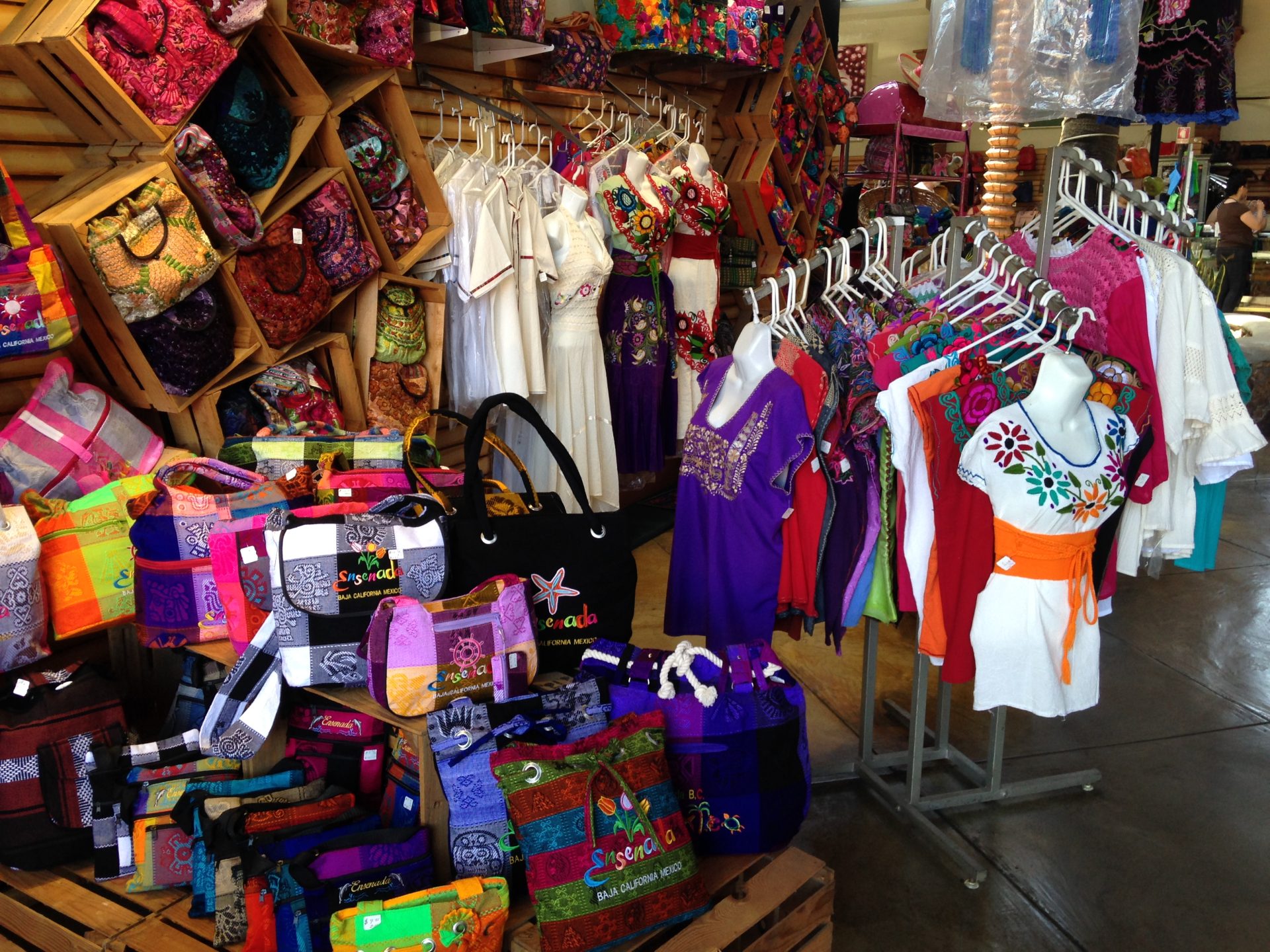 Festooning many of the stalls, arcades and kiosks are woven ponchos, backpacks and handbags bearing the logos of U.S. sports teams. Whether you’re a fan of the Los Angeles Rams, Green Bay Packers, Boston Red Sox or St. Louis Cardinals, they’ve got what you need.

After lunch on the ship, I headed back into town, this time marching right across the street from the pier to a complex of whitewashed, tile-roofed buildings in traditional Mexican style. It turned out to be the city’s civic and cultural center. I stopped to admire the gardens before visiting the Historical Museum of Ensenada. 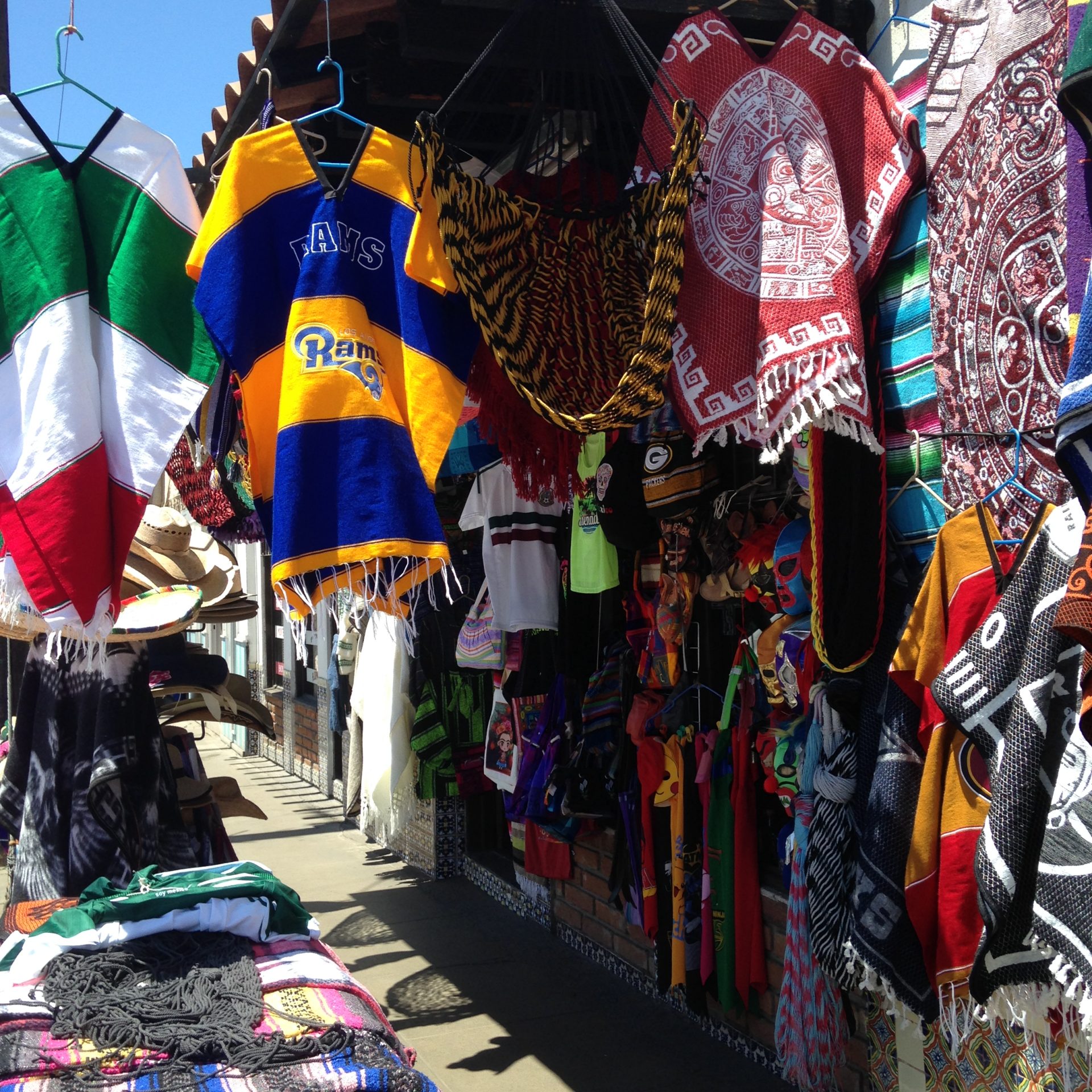 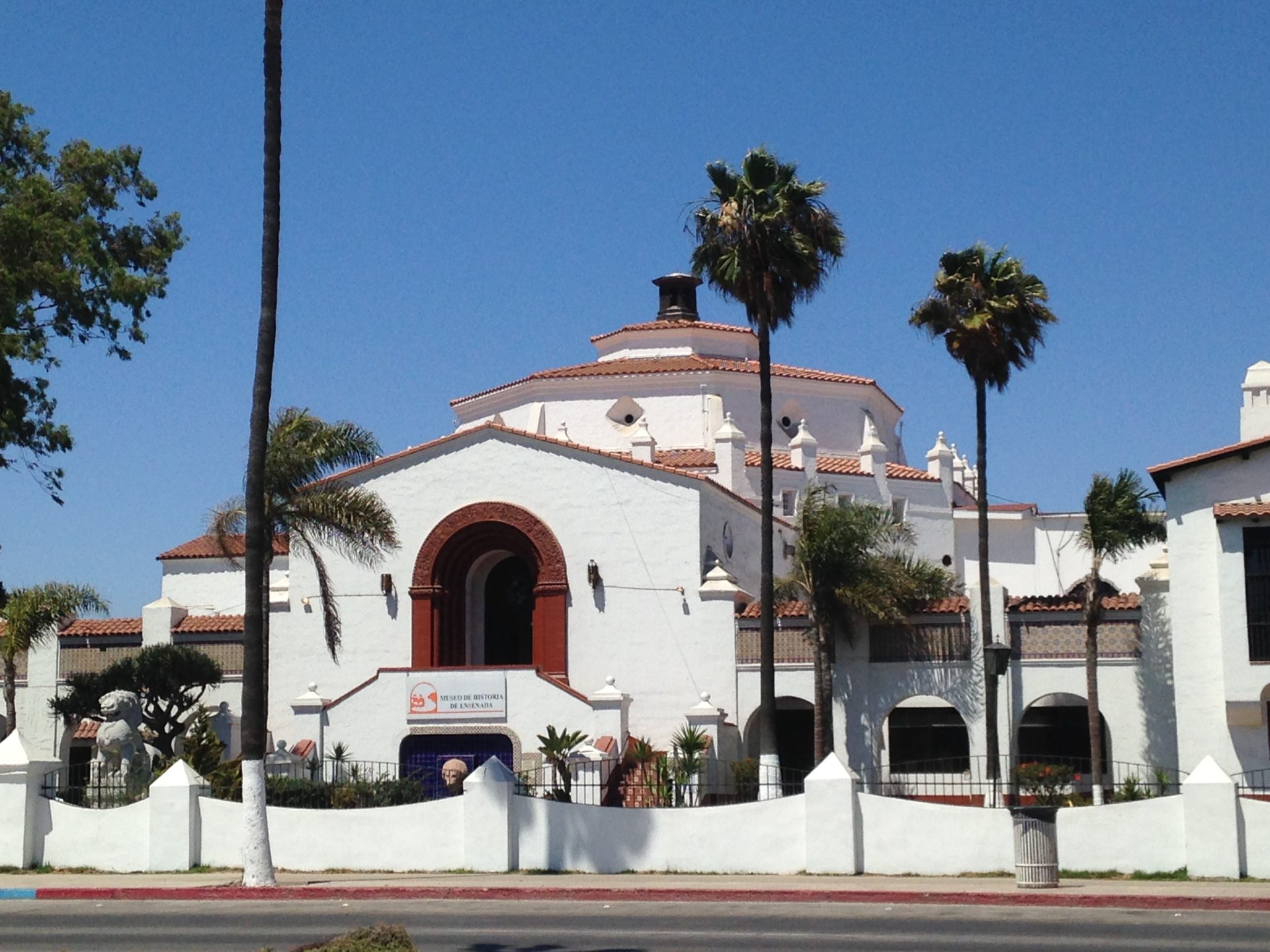 The Historical Museum of Ensenada is conveniently located across the street from the cruise dock. (Randy Mink Photo)

The Carnival Imagination, unlike the line’s mega ships, is small enough to get to know in a day. The decor is big and bold with lots of gold. Add sparkly lights and some wild artwork, and you’ve got a ship that certainly tantalizes the senses. Accenting each level of the six-deck atrium are ribbons of blue and red neon, along with illuminated gold reliefs of winged, Sphinx-like heads and other symbols of antiquity.

Passenger makeup on this short-duration cruise, not surprisingly, leaned to the young side, with plenty of teens and people in their 20s and 30s. Of the senior guests, most seemed to be grandparents in multi-generational family groups. I was traveling alone and placed at a table in the Spirit Dining Room with two other men on their own—George from Phoenix and Rocky from Los Angeles. We all shared a passion for travel and would talk about our bucket lists. George had been on more than 30 cruises, most of them with Carnival or Royal Caribbean, and enjoyed all the perks that come with being a loyal customer. The three of us went to several Dynasty Lounge shows together, including “Epic Rock,” a blockbuster with tunes from the 1970s and ’80s. 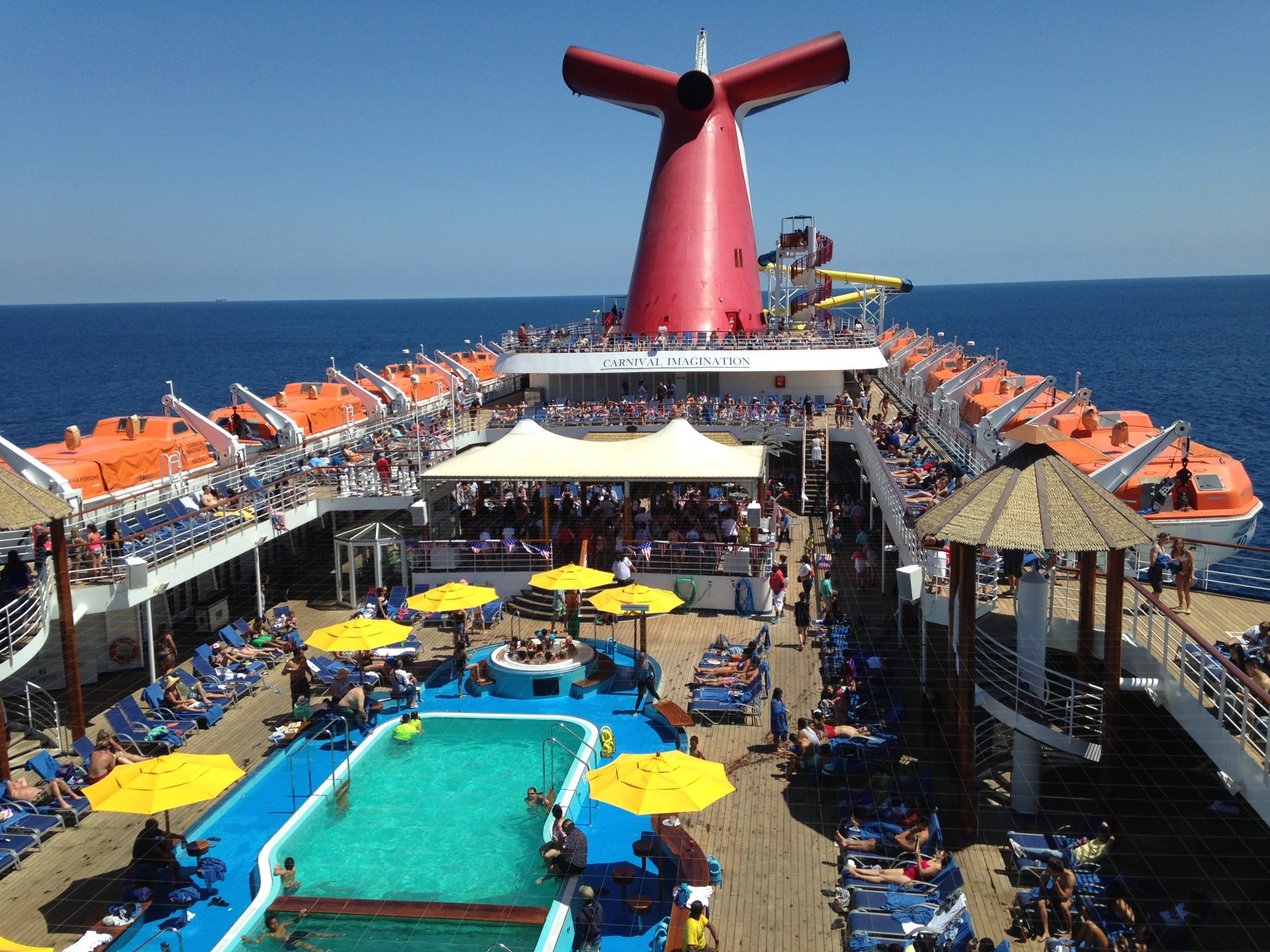 We also frequented the Alchemy Bar, a place where master mixologists in white lab coats take cocktails to the next level. In an old-time apothecary setting, Ismail from Turkey, Jorge from Colombia and Lidija from Serbia crafted drinks with scientific precision, cutting up bits of fruit and herbs and blending spirits with ingredients like oil of orange and various liqueurs. Some drinks were even lit on fire. Behind the counter were containers of vodka steeping with pineapples or strawberries, gin being infused with celery and Jameson whiskey with fermenting bananas. Sections of the menu were divided between The Remedy, The Medicine Cabinet and Cocktail Therapy. Among the drinks: Restorative Basil Drop (vodka, fresh basil, simple syrup, fresh citrus) and Curative Peach Cosmopolitan (vodka, peach schnapps, cranberry juice, fresh citrus).

It may have been a short cruise, but one long on memories.

For information on three- and four-day Carnival cruises from Long Beach, log on to www.carnival.com.