Candice Mortara: Rolling on the River 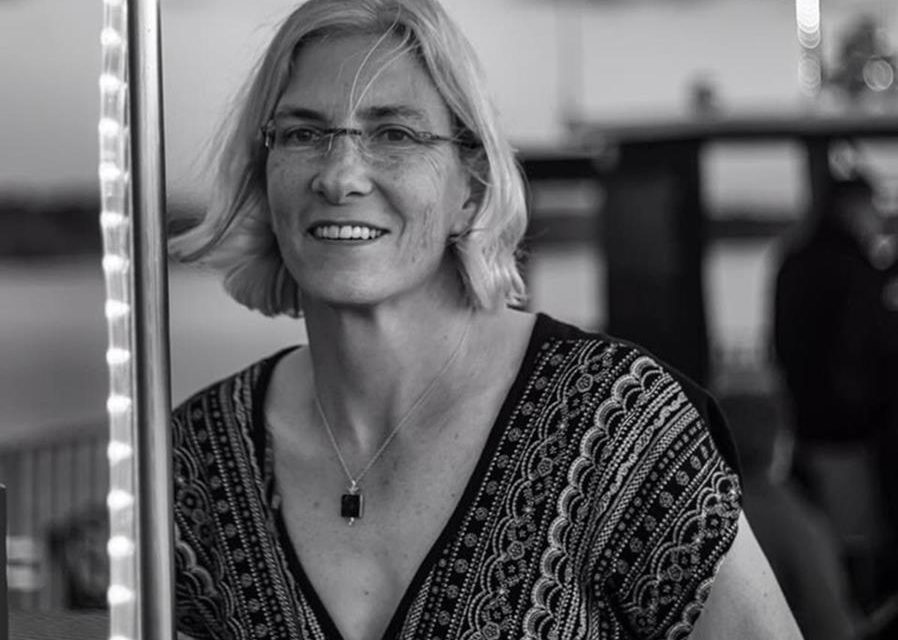 Starting a sightseeing cruise business from scratch is no easy task. But Candice Mortara utilized her contacts from nearly a decade at a local non-profit and passion for all things water to launch Fox River Tours, a Wisconsin-based sightseeing cruise operation with two boats plying the Fox River.

Tell us about Fox River Tours. How did you start this business?

Candice Mortara: I worked with Fox Wisconsin Heritage Parkway which is a non-profit that I helped start. I worked with that group for almost 10 years, focused on the river, the history and waterfront development.  I was struck over and over again how little opportunity there was for people without their own boats to get out on the water.

At that time a boat called Foxy Lady was in Green Bay, and that was the only boat on the Lower Fox River. They left and went to Florida, and then there was nothing. It just seemed crazy to me to have this huge, underutilized resource. Many people have fishing boats or ski boats, but there’s a much bigger population that doesn’t own a boat that no one was thinking about. I started looking around and asking questions, and everyone said, “No, that will never work – there’s been many boats over the years, and they always go out of business – it’s just not possible on this system.” I researched and there had been boats throughout the years that usually went out of business after about 10 years but that was more of a lifestyle choice for the owner, not necessarily that you can’t make it work. I originally thought about trying to do it through the non-profit and thank goodness the board said no because I decided to just jump in and do it as a for-profit business.

Are you an avid boater?

What sort of access did that give you in getting the business up and running?

CM: We originally were going to have the first boat in Appleton, Wisconsin. I bought the boat from upstate New York in 2016. It was on the trailer-truck to start coming here, and the day before it was to leave they closed the Menasha Lock due to an invasive species they found. That was the way we were supposed to get the boat to its home dock – put it in in Oshkosh and then drive it through that lock to get to Appleton. So, now all of a sudden I had a boat coming here and no way to get it to Appleton.

At 4 a.m. the next morning I woke up and said to myself, “Take it to the other end of the river.” I called the Park & Rec director in De Pere, Wisconsin, who I knew from working with the non-profit for all those years, and explained the situation. I asked if he had any interest in a boat coming there, and he said, “Yes, definitely” and gave me three options of city parks to dock.

It looks like you have two boats in the water now.

CM: Yes! I felt guilty that we didn’t bring it to Appleton like we had said we were going to, so I had to find another one. The Peshtigo Princess which was in Northern Wisconsin came up for sale, and we purchased that and started in Appleton this past year. 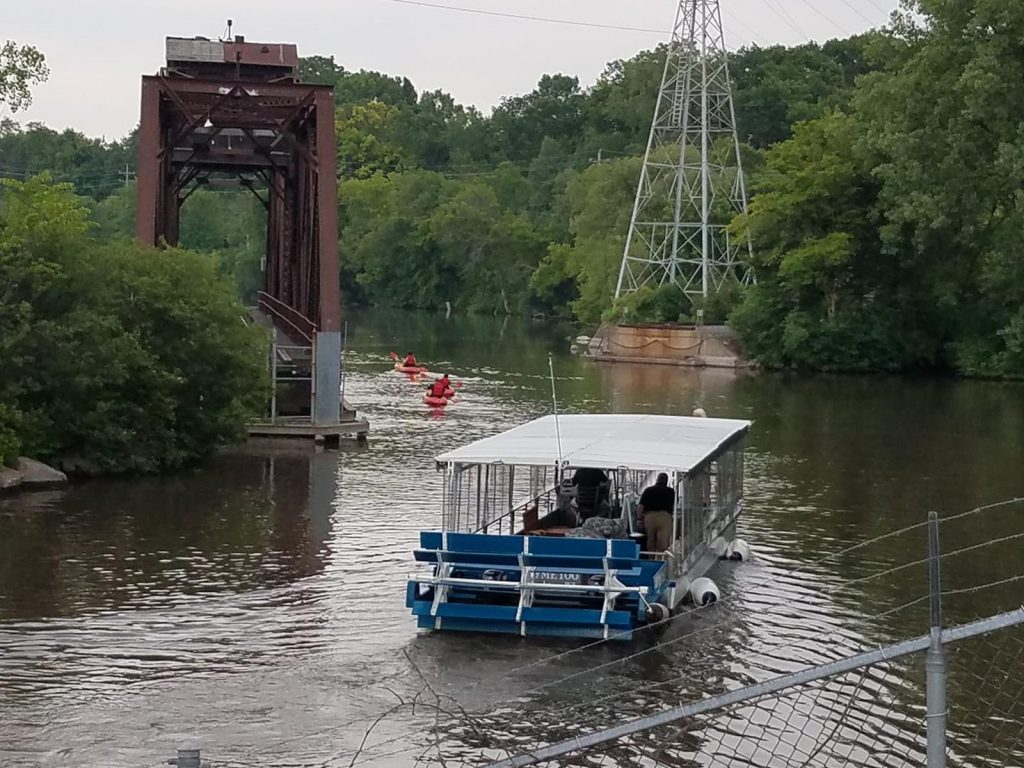 Who is your typical customer?

CM: We have three segments – public tours, group tours and private charters. We have a lot of word-of-mouth, people returning when they have company coming to town or if they have a celebration they’ll come on the boat. Margarita Monday cruises are a younger crowd, but for the rest of the cruises we probably are 45-to-65 age range for the public tours. We do a few school field trips, but mostly it’s retired senior-center day trips. I am a member of Circle Wisconsin so we’ve gotten two, three, or four multi-day trips where they’ve plugged us into their itinerary. The private charters are mostly corporate outings where there’s employee appreciation or client appreciation/acquisition event.

Tell us a little bit about what people experience when they’re onboard?

CM: It’s a different experience based on the boat. The De Pere boat is two levels so the top is open-air and the bottom has windows There’s a bartender and full bar and restroom with a captain and two mates. Most of the time we go south from where we are docked, there’s nice wooded areas and homes, there’s one huge home that we call the “Castle” that everyone likes. Once in a while we go north through the De Pere Lock and head towards Green Bay, we can just go a little less than a mile out into the bay. I thought people would be more interested in going through the lock than they are, we just found that demand was the less for those. 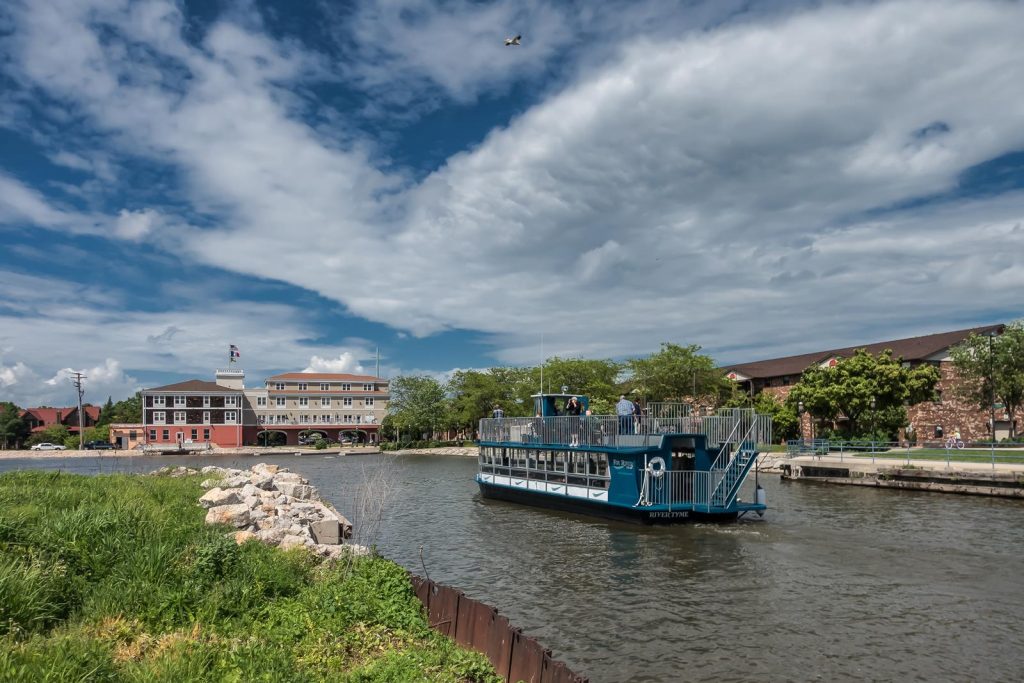 The Appleton boat is smaller and has fewer amenities, but it lends itself to tuck up closer to the shore to see more wildlife. It has a ramp built-in to the bowl to get on and off the boat, and so in theory we could tuck up into any park and let the ramp down and let people off. That opens up a lot of opportunities for different types of cruises that have a land portion.

Looking back over the last couple of years has it been a struggle or did everything really fall into place for you?

CM: My partners Christine and Todd Williams and I are pretty happy with how things have fallen into place. Finding captains that can work a lot in the summer and not in the winter is difficult, so I think that’s my biggest obstacle. I want to look at developing some tours in the winter so that I can use the great people that I have who want to be employed all year. There are dams controlling the flow on the river that we are on, so in theory if we had a boat that could be warm enough inside we could go a lot longer into the season. The other issue is finding great training for tour guides. If there was something else I would’ve liked to have had guidance on how to train superb tour guides.

I see that you have a website and you are doing online reservations.

CM: We have Fare Harbor and it’s been phenomenal. I absolutely love it and highly recommend it for all tour-based online things – it’s our savior. Our challenge has been integrating the POS we have for the bar, it doesn’t integrate with Fare Harbor so we have two system.

What’s exceeded your expectations at this point?

CM: I think just in general people’s reaction to the water has been amazing. Whether it’s people that have lived here their whole lives and have never been on it or the tour companies coming in that tell me, “If ever there’s a boat cruise, they really need to put that in the itinerary because people always mark those as one of the best parts of the tour.” I never fail to be amazed at how important water is to everybody.