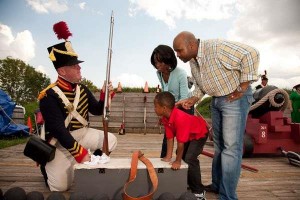 Exciting things have been happening in Baltimore, and even more events are in store for groups in the coming year. With milestone commemorations honoring the 150th anniversary of the Civil War, bicentennial of the War of 1812 and Harriet Tubman centennial, 2013 promises to be a year filled with landmark celebrations leading up to the Star-Spangled Spectacular in 2014.

In honor of the 150th anniversary of the Civil War, the B&O Railroad Museum launched the exhibit The War Came by Train. Part of the five-year commemoration from 2011 until 2015, the exhibit spotlights the role of the transportation industry during the war and includes numerous historical artifacts on public display for the first time.