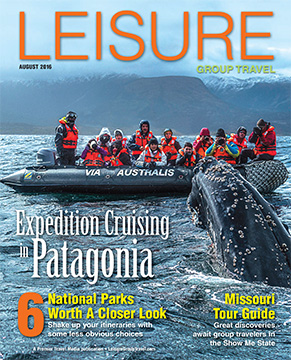 Browse the Articles from This Edition

The August issue of Leisure Group Travel revolves around opportunities for groups in the great outdoors, from national parks in the West to big-city biking in the East. Nature-minded travelers will find it to be a breath of fresh air.

As America celebrates the centennial of the National Park Service this year, much of the attention will be on the usual suspects – Yellowstone and Yosemite, Grand Canyon and Grand Teton. In her article “6 National Parks Worth a Closer Look,” however, writer Sue Arko sheds light on lesser-known parks like Crater Lake, Big Bend and Great Sand Dunes. Staff writer Miles Dobis identifies “5 Ecotourism Gems,” including Wisconsin’s Apostle Islands National Lakeshore and St. Croix National Scenic Riverway, in his Central Region feature.

The waterways of Patagonia is the subject of managing editor Randy Mink’s cruise feature on the Stella Australis, an expedition ship that travels to Cape Horn via the forested, glacier-backed
passages of Tierra del Fuego, the windswept archipelago at the tip of South America. The whole world of adventure travel comes into sharp focus in our “Take Five” interview with Shannon Stowell, president of the Adventure Travel Trade Association.

The Missouri Tour Guide, a special section, has multiple articles on group-friendly destinations in the Show Me State. “A Stroke of Genius,” for example, follows Highway 36 through northern Missouri towns that nurtured creative types like Mark Twain, Walt Disney and J.C. Penney. Readers also take a drive down old Route 66 and in the Central Missouri feature get insight on cities like Columbia, Fulton and Jefferson City. Sample itineraries and a list of special events round out the 20-page Missouri section.

Click Below to Get the Special Missouri Tour Guide Section 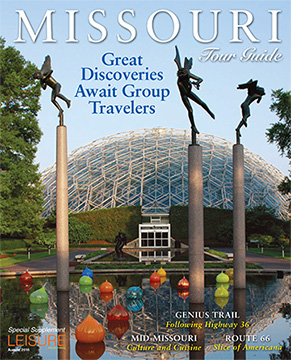