Antwerp’s Newest Museum: The Flip Side of Ellis Island

The new Red Star Line Museum showcases a historic link between Antwerp and America, an overlooked chapter in maritime history. 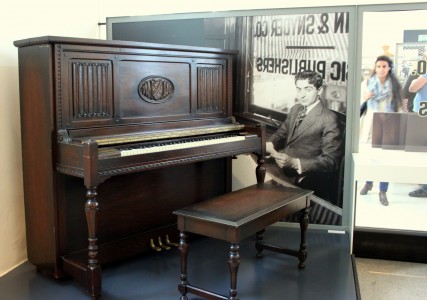 The museum displays a piano owned by Irving Berlin, whose family traveled to America on a Red Star Line ship.

Everyone knows the story of the poor immigrants who arrived at Ellis Island after a transatlantic journey from Europe. The “huddled masses yearning to breathe free” came by the millions in the late 19thand early 20th century, all with one dream—a better life in America. Their long voyage ended as they sailed into New York Harbor past the Statue of Liberty, a beacon of freedom and hope.

Many of us have visited the Ellis Island Immigration Museum and possibly even traced our ancestry there. But a new attraction in Antwerp, Belgium tells the flip side of the tale as it unfolded on the opposite shore of the ocean. In the actual brick warehouses where emigrants gathered to board, the Red Star Line Museum sheds light on the almost forgotten history of an American-owned shipping company that from 1873 to 1934 brought more than two million passengers from Antwerp to New York, Philadelphia, Boston and Halifax, most of them poor and oppressed peoples from Eastern Europe; about 25 percent were Jewish. Fewer than 200,000 were Belgians. 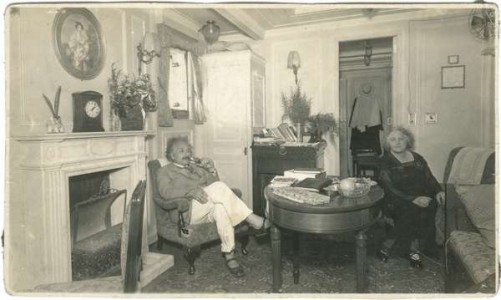 Albert Einstein and his wife in a Red Star Line stateroom

Among those dreamers was a Jewish family from a Russian town in what is now Belarus. The five-year-old son, Israel Isadore Baline, who traveled on Red Star Line’s Rijnland, went on to become a songwriter extraordinaire and changed his name to Irving Berlin. Had it not been for that voyage in 1893, “God Bless America” and “White Christmas” might not be part of the American songbook.

There were some rags-to-riches stories indeed, but it’s mostly the personal testimonies of ordinary folks that dominate the two exhibit floors of the Red Star Line Museum, located in Eilandje, a former dockyard district undergoing redevelopment. The museum is just a short walk from the Kattendijk Dock, where most European river cruise ships berth in Antwerp.

Curator Bram Beeleart confirms the museum is more about people than ships, emphasizing the importance of firsthand accounts of migrants before, during, and after their transoceanic trips. “The overall theme we want to convey is that it’s about little people who imagined a better life for themselves on the other side of the ocean…little people who dreamed great things.” 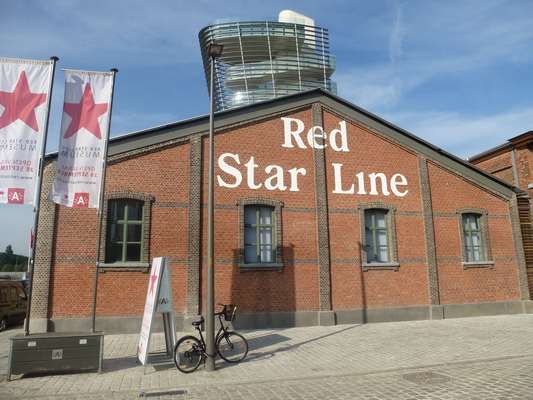 The fact that the museum occupies the original Red Star Line departure sheds on the Scheldt River’s Rijnkaai, or Rhine Quay, “adds power to the whole experience,” he added. The humble, decaying buildings had been empty since 2000; the oldest dates to 1894.

In putting together the museum’s exhibits Beeleart and his team visited Ellis Island Immigration Museum and Hamburg’s Ballinstadt Emigration Museum, among others. Beyer Blinder Belle, the New York architecture firm that designed the Red Star Line Museum, also did the restoration work at Ellis Island.

The eight thematic areas abound with oversized photos and text (including excerpts from letters), artifacts, touchscreen computers, pullout drawers, and audio and video stations. Visitors follow in the emigrant’s footsteps, starting at a Warsaw ticket agency similar to many such offices in Eastern Europe where passengers would have bought their Red Star Line tickets. Next in the sequence is a train compartment for the trip to Antwerp, followed by glimpses of early 20th century Antwerp, procedures in the Red Star Line departure buildings, the deck of an ocean steamer, shipboard life, arrival at Ellis Island and a new future in the United States. Prior to following the European emigrant’s path to the New World, visitors encounter a timeline of migration throughout human history and installations that spotlight “Six Star Witnesses,” including Red Star Line passengers Albert Einstein and Sonia Pressman Fuentes, the latter a renowned feminist who made the trip from Florida for the museum’s grand opening last fall.

The exhibit on 1910-1922 Antwerp, which features grainy film accompanied by sound effects like streetcars and the clip-clop of horses, describes how locals viewed the Eastern Europeans with curiosity and pity—exotic head scarves, weather-beaten faces and ragged appearance clearly set the migrants apart. Upon arrival in Antwerp, train passengers from small towns in Russia, Poland, Austria-Hungary, and Germany were awed by the cathedral-like Central Station, still one of the city’s grandest sights and worth a look even if you’re not traveling by rail. Before their 10-day ocean voyage, the rumpled travelers stayed in dingy, overcrowded migrant hotels and often were the target of crooks. But Basia Cohen, as a girl from Russia, had positive memories of her 1921 experience: “Antwerp was my favorite city of all. It was the first time I had ice cream. We used to hear about ice cream but we never even had seen it.”

Visitors also experience the anxiety that emigrants endured in the very building where they awaited the medical exams that resulted in 2 to 4 percent of ticket holders being rejected for the trip to America, as the line would be liable for repatriating anyone with a contagious disease. Everyone in third class had to take an hour-long shower using vinegar and other solutions; their clothes were fumigated and baggage was sterilized in large pressure boilers.

Once at sea, most of the emigrants wallowed in the bowels of the ship, where conditions were cramped. Those in third class, or steerage, slept on straw mattresses and had to scramble to stave off hunger. In the words of Golda Meir, a Russian immigrant who settled in Milwaukee and later became the prime minister of Israel: “It was not a pleasant trip. We spent the nights on sheetless beds and most of the days standing in line for food that was ladled out to us as though we were cattle.”

Passengers in first- and second-class (pleasure travelers, businessmen, even an occasional emigrant), however, enjoyed fine dining, deck games and evening entertainment. Sometimes they would throw fruit or candy down to the children traveling in steerage. On display are dishes, silverware, ashtrays and cigarette lighters with the Red Star insignia, plus sample menus, wine lists and pictures of ballroom dancing. Ironically, songs played in the first- and second-class lounges in the 1920s and ’30s included ones written by a now-famous Irving Berlin, who had traveled in steerage three decades earlier. 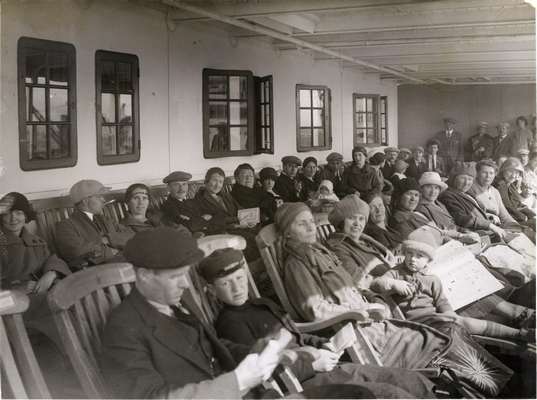 Third-class passengers in their deck chairs

From its earliest days the Red Star Line promoted its product in artistic brochures and posters, but concentrated more and more on the vacation market once the U.S. clamped down on immigration in the early 1920s. Actual printed materials and touchscreen displays show how the line marketed cruises to “discriminating travelers” who could “leave boredom behind and find solace in the sun” on a trip from New York to Havana, Nassau, and Bermuda. Its 2,500-passenger flagship, Belgenland II, touted a swimming pool and fake beach. During Prohibition, Americans took “booze cruises” to Bermuda, and the line even did seven world cruises. Over the years Red Star operated 23 ships (all with “land” in the name—Pennland, Westernland, Lapland, etc.) and chartered other vessels. Unable to survive during the Great Depression, the company was finally liquidated in 1934. Its demise was a big blow to Antwerp, where “the pulse of the Red Star Line was felt in the very arteries of the city,” wrote one local newspaper reporter. 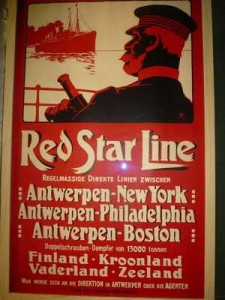 The Red Star Line was known for its artistic posters.

Exhibits on Ellis Island and tenement life in New York’s Lower East Side give way to the success stories, including the iconic example of composer/lyricist Berlin. A showpiece is one of Berlin’s transposing pianos, on loan from his second daughter, Linda Emmet, who lives in Paris. Visitors are reminded of the many songs he penned, from “Alexander’s Ragtime Band” to “Puttin’ on the Ritz.”

A museum visit concludes with the stories of today’s immigrants in Antwerp and a chance to do online genealogical research of your own. Then climb or ride the elevator up the new concrete-and-steel observation tower, which mimics the chimney and bow of a Red Star Line ship. The open-air platform affords a panorama of quays along the Scheldt—the last scenes that passengers, on their way to an uncertain future, would have witnessed as Antwerp and the Old World slipped from view.

For anyone fascinated by maritime history and tales of human migration, the Red Star Line Museum is Antwerp’s star attraction. For information, visit redstarline.org.