An American Symbol of Freedom for over 100 Years 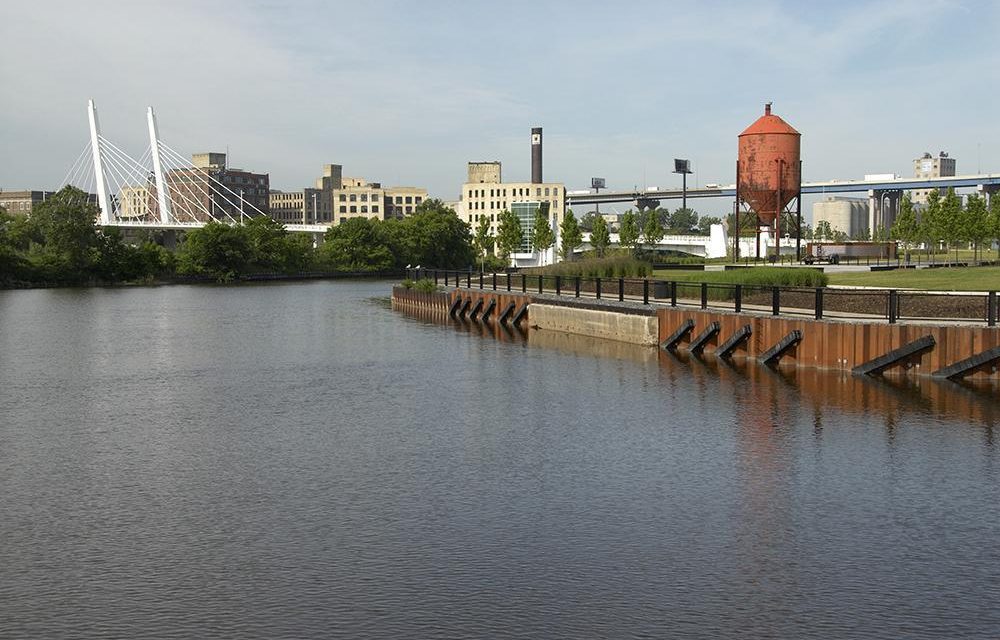 Much more than a nostalgia trip for motorcycle enthusiasts, the Museum offers a glimpse of American history and culture like you’ve never seen before – through the successes and trials of an iconic American company.

The Harley-Davidson Museum® Self-Guided Tours provide intriguing added context to the Museum experience. Tour topics highlight the history of the Museum grounds, graphic design, and motorcycle evolution. This additional information, included in the admission cost, delivers an enhanced experience during your visit.

Headlights, speedometers, and shock absorbers – which would you have found on the first Harley-Davidson® motorcycles? None of the above. Harley-Davidson motorcycles are works in progress. Each model represents the latest in safety, comfort, and design, with new technology continually introduced. Some features start as options and eventually become standard. The Evolving Bike Self-Guided Tour explains when and why various features made their debut.

Going from Vroom to Zoom

Riding a motorcycle is fun, but only if it actually moves. This is where “final drives” come in, transmitting power to the rear wheel. Without them, motorcycles would be just big, gas-powered paperweights.

Seeing the road helps – yet, early bikes only offered gas lamp headlights as optional accessories. These had an annoying tendency to catch fire or explode. (Talk about “burning up the road!)

Today we have social networks. In 1903, they had a “social attachment” — essentially a wicker chair on wheels that you attached to a motorcycle. (Presumably you could “unfriend” a buddy back then too…by unhooking the chair.)

Speeding along the open road is exhilarating, but being able to stop is nice, too, and safer. Braking systems have evolved tremendously. Early motorcycles, like bicycles, had pedal-operated coaster brakes for the rear wheel. Stronger drum brakes with a foot pedal appeared in 1914—but still only in the rear.

Accelerating from Zero to What?

Early motorbikes had just one cylinder and just one speed. Riders didn’t have to worry about shifting. The first three-speed transmission arrived in 1915. Manual transmissions involve changing into higher gears as you go faster, which requires a clutch and shifter.

Riding Should Not be a Pain in the Butt

You could cover a lot of distance on an early motorcycle. Unfortunately, much of it was up and down. Without shock-absorbing suspension, every bump in the road rattled riders from butt to brain. Many wore “kidney belts” (like weight-lifting belts) to keep their insides inside.

Getting a Good Start

People today often talk about “kick starting” a process to get it going. The term comes from motorcycles, which for decades used kick-starters, introduced in 1916, to turn over the engine. In 1964, the Harley-Davidson® 3-wheeled ServiCar™ was introduced with an electric push button starter.

In the art world, graphic design is where “the rubber meets the road.” It’s where artistic ideas and innovations turn practical, adapted to a mass medium with tangible goals. Graphic design combines words, symbols, and images to communicate. Used in advertising, it’s meant to inspire action and drive sales. The constant evolution of 20th century graphic design and the larger art ideas that influence it are reflected in a century of Harley-Davidson® advertising and in the Graphic Design Self-Guided Tour.

Saying it (And Selling It) Simply: Pictorial Modernism 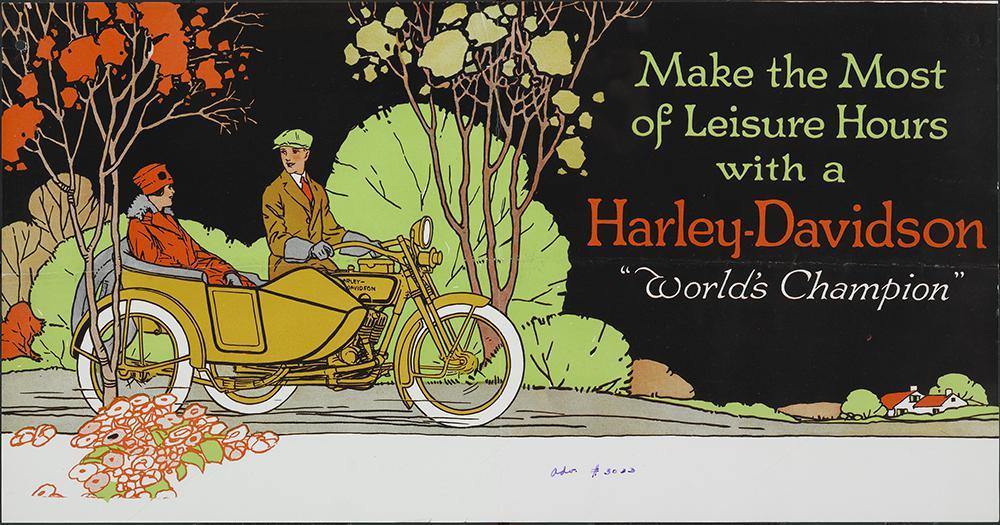 Simple composition, broad shapes of solid color, brief but strong text are typical of Pictorial Modernism, a bold, unfussy approach that was a reaction to the Victorian era’s ornate, complicated designs. In 1920, Harley-Davidson® advertisements embodied this style, with minimal detail and a simple, warm palette of greens and oranges that evoked a mix of seasons.

The Business of Art: The New York School

In the decades after World War II, America was booming. The vibrant economy brought a new vitality to advertising by transforming graphic design into professional careers. 1957, Harley-Davidson® advertising reflected the expanding economy by including something for everyone: a suburban ranch house, city skylines, and marking a cultural shift – a young woman riding alone. Harley-Davidson® designs used ‘layered’ looks with background scenes, central characters, and foreground figures to give depth and vigor to advertisements. 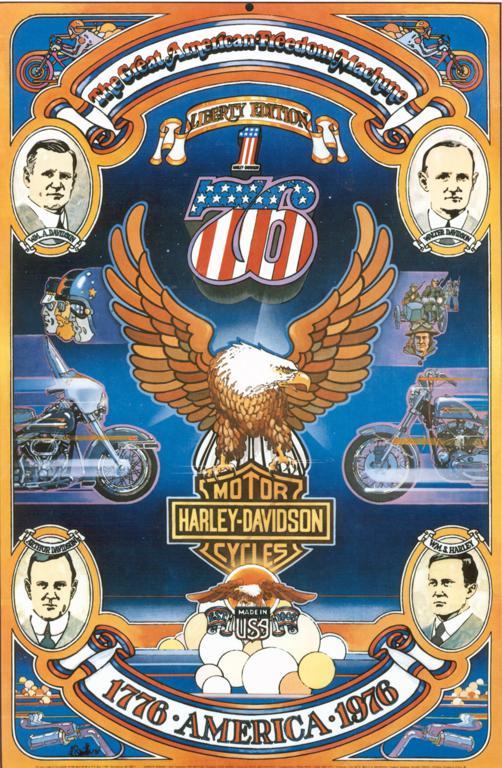 An exuberant blend of old and new, foreign and familiar, energized the Psychedelic and Pop Art movement of the late 1960s and 1970s. Harley-Davidson® designers worked with Milwaukee artist, Paul Smith, to create a poster that blended bright, comic book colors and dreamlike “drug culture” imagery.

Advertising is about getting one’s name in front of customers. It might be on posters, magazines or, in this case – gas tanks. Harley-Davidson® motorcycles have always proudly displayed the company name on their tanks. Since the early 1930s, lettering style has changed to complement individual models.

In Praise of Progress: Art Deco

Public Service & Public Art: The Influence of the WPA 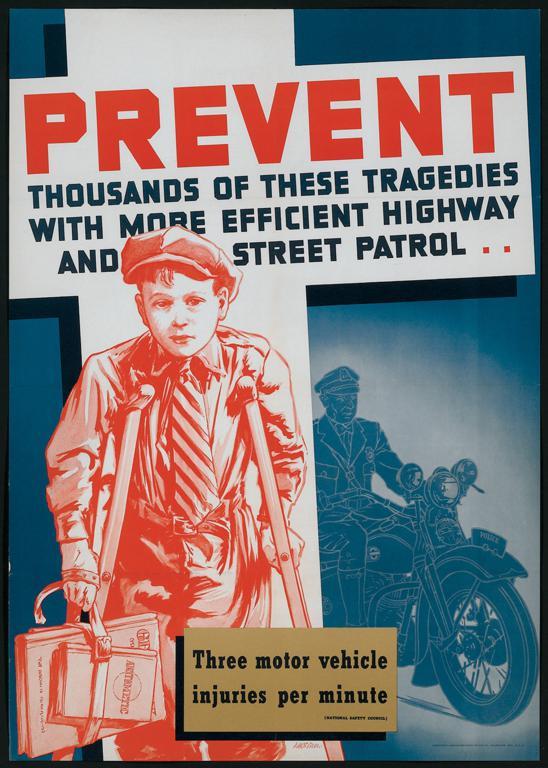 Harley-Davidson® advertisements in the 1930s supported the National Safety Council as part of the Works in Progress Administration (WPA).

The National Safety Council advocated using motorcycle police to curb traffic accidents in the 1930s. Harley-Davidson® advertisements supported the campaign with a 1939 poster, bearing the unmistakable influence of the Works in Progress Administration (WPA). The WPA, as part of Roosevelt’s New Deal, provided work for unemployed artists in the Depression. 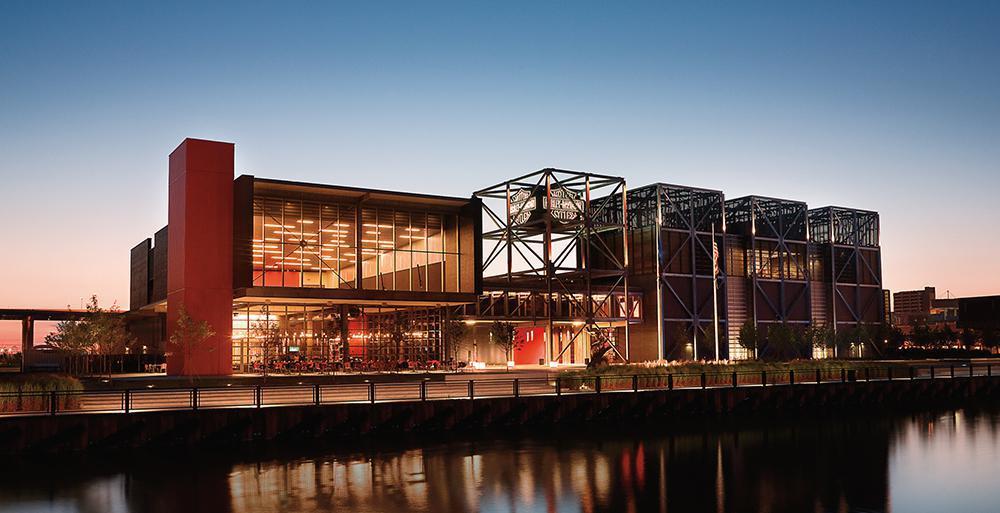 The Harley-Davidson Museum® offers a glimpse of American history and culture like you’ve never seen before.

This 20-acre site is more than just the grounds of the Harley-Davidson Museum®. It is a potent symbol of creative reuse, and an example of a community determined to reclaim its home and heritage. Once written off as a neglected brownfield industrial tract, it has since been revitalized and restored. Dramatic views of the city and a strong connection to the natural setting make a bold statement about what is possible. The Museum Grounds Self-Guided Tour is broken into six areas of interest.

Change has been dramatic on the eastern end of the Menomonee River Valley. For centuries, this was lush marshland. Native Peoples called it Menomonee (good seed) for its abundant wild rice, but industry transformed the landscape in the 1800s. Factories replaced marshes. Railroads and canals crisscrossed the land.

Symbol of Heritage & Hope: Preserving the Hoppers and Revitalizing the Landscape 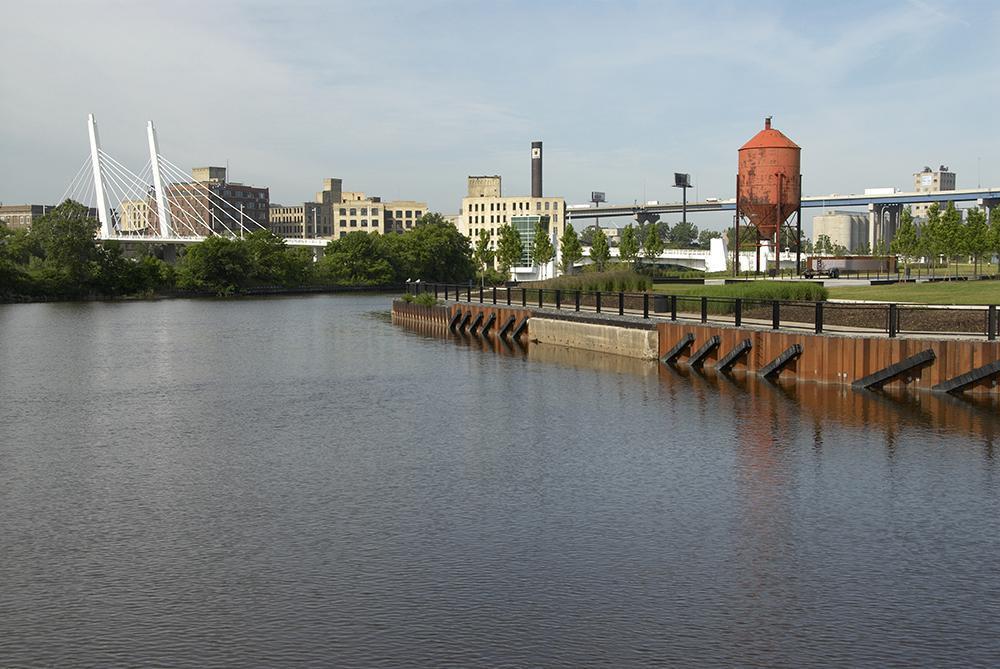 Two orange hoppers, holdovers from a sand company that once operated on the site, are reminders of the area’s past.

Two orange hoppers at the north and south ends of the Museum grounds are constant reminders of this site’s history and future. Both are holdovers from a sand company that once operated here, incorporated into the landscaping as reminders of the area’s industrial heritage. They also symbolize a future built on smart, sustainable reuse.

Who’s Here?: Enjoying a Community of Waterways and Wildlife

Dancing with Danger: “The Dynamic Hill Climber” by Jeff Decker 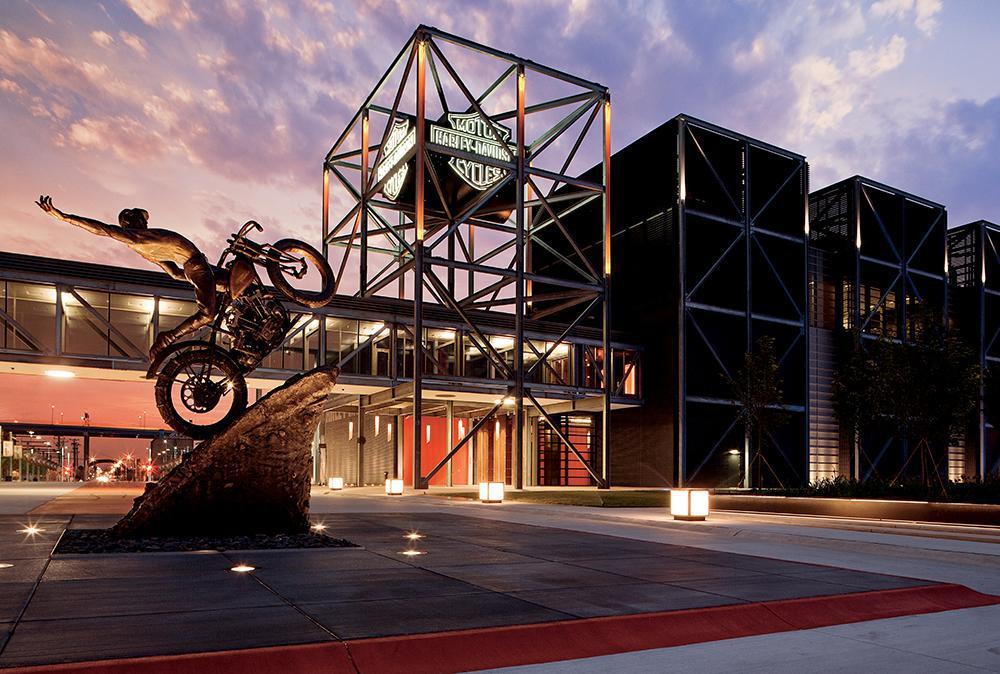 The Hill Climber, a 5,000 pound bronze welded sculpture that stands 16 feet tall, is a public artwork by Jeff Decker.

This isn’t your typical, straitlaced sculpture, but then, motorcycles aren’t about being typical or straitlaced. “He is crashing,” says sculptor, Jeff Decker, describing the rider. “But every hill climber crashes. It’s part of the race.” Decker’s interpretation in bronze of a Harley-Davidson® motorcycle and its rider captures the drama and daring of “hillclimbing,” a form of extreme racing. 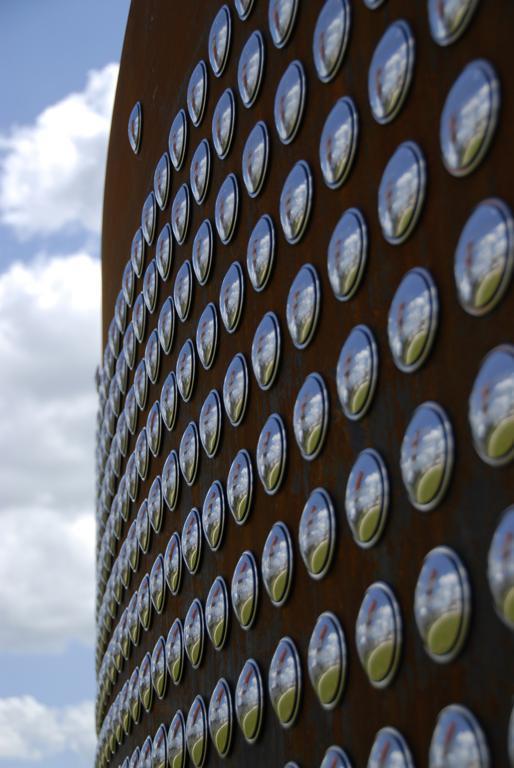 Harley-Davidson® connections are displayed through the customized creation of stainless steel rivets.

The messages engraved here vary: joyous, poignant, thoughtful, and funny. All reflect a passion for living life fully – the Harley-Davidson® spirit, and that spirit takes physical form in the rivets that carry the messages. Rivets are connector. Here, they symbolize the connections that unite the brotherhood and sisterhood of Harley-Davidson® motorcycle owners.

More information about Harley-Davidson Museum® Self-Guided Tours, Back Roads Tours, Audio Tours and Factory Tours can be found at H-DMuseum.com,  groups@h-dmuseum.com, and (414) 287-2789.