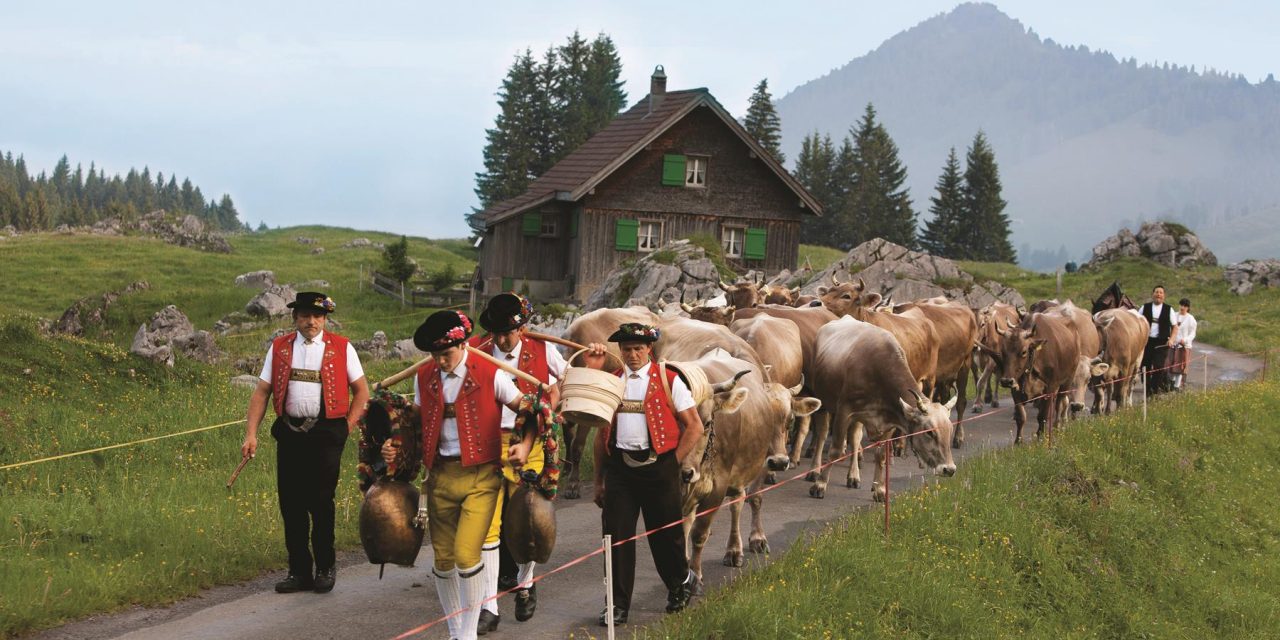 Check the calendar and add a festive element to your itinerary

A trip to Switzerland typically revolves around gorgeous scenery and time-honored tourist attractions, but why not spice it up with a special event that provides a fresh look at the Swiss way of life. If the time of year is right, consider working in a religious procession, holiday shopping or a color-splashed parade of cows passing through an Alpine village. How about a wrestling festival?

Here are some options that will add a magical twist to the itinerary:

As summer approaches, communities in Alpine regions host festive processions of costumed herdsmen and women moving elaborately decorated cows, sheep and goats from farms in the valley for three months of grazing in high-mountain pastures. At the end of September, the ritual is repeated as the animals return to the valley for the winter. Such photogenic events may include street parades and other festivities heralding this seasonal phenomenon in the agricultural cycle. 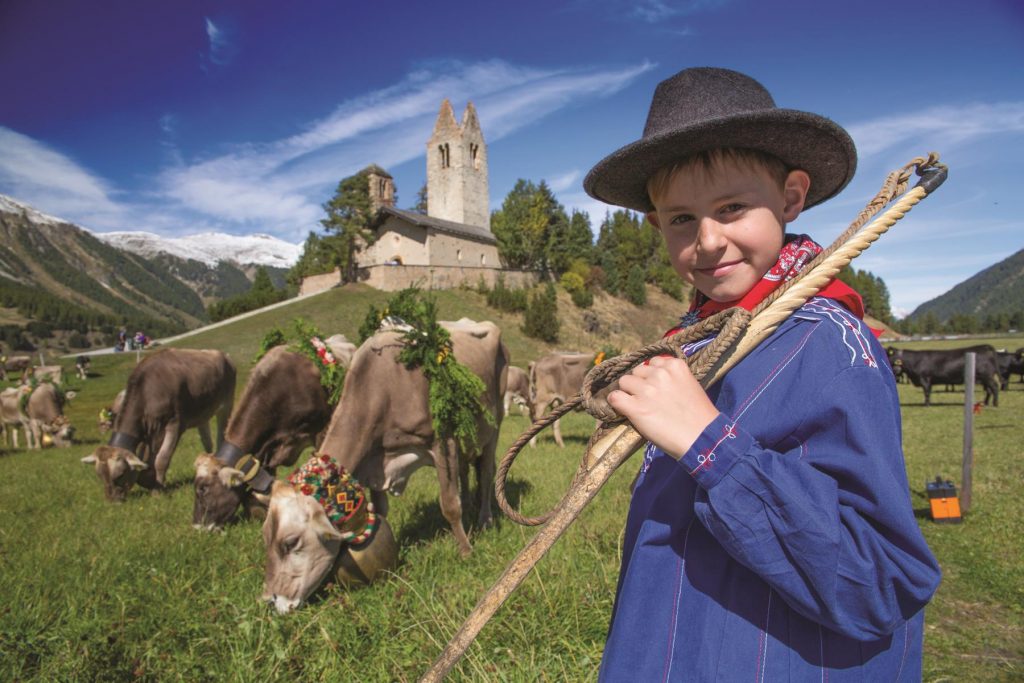 The cattle that spent the summer on the Alp Marguns return to the valley in the middle of September. Festively adorned, they make their way proudly through the village of Celerina to the San Gian meadow – here in front of the Church of San Gian. Copyright by: ENGADIN St. Moritz By-line: swiss-image.ch/Christof Sonderegger

On Wednesday evenings from June through August, the town of Brunnen showcases two of the oldest traditions in the Alpine regions. Spectators flock to the shore of Lake Lucerne to see twirlers artfully send flags fluttering through the air and listen to costumed musicians playing the alphorn, a long wooden tube with a cup-shaped mouthpiece. Originally used by herdsmen to call in animals from the pasture and to communicate with people on the mountain and in the valley below, the alphorn today is a musical instrument and a revered symbol of Swiss heritage.

LARGEST SWISS FLAG IN THE WORLD

Every year in northeastern Switzerland, a mammoth flag measuring 262 feet square is hung for two consecutive days on a sheer rock face of Säntis Mountain. The spectacle celebrates the July 31 birthday of the Säntis aerial tramway, which opened in 1935, and Swiss National Day, an August 1 holiday that marks the founding of the Swiss Confederation in 1291. The flag, weighing 1,543 pounds, is mounted by 20 rope-access technicians who typically have to deal with extreme weather. After a 10-minute cable car ride from Schwagalp Pass to the summit (8,208 feet above sea level), visitors enjoy 360-degree panoramas, with views of six countries on a clear day.

This military musical event, held for a week every July in Basel, brings together bands, dance troupes and other performers from around the world. Staged nightly in the arena at former barracks on the banks of the Rhine, shows present not only military bands but all music genres, from rock to classical. A highlight of the week is the Basel Tattoo Parade, which attracts 100,000 spectators. Food stands in the streets around the arena add to the festive ambience. Basel Tattoo, the second-largest tattoo after the Royal Edinburgh Military Tattoo, is set for July 16-24, 2021.

During Easter week, the story of Jesus Christ’s final hours on Earth comes to life on the ancient streets of Mendrisio, a small town in the Italian-speaking canton of Ticino. The evening procession on Maundy Thursday depicts Christ’s journey to Calvary, featuring musicians, torch bearers, horses and 200 magnificently costumed actors playing Jews, Romans and a cross-bearing Christ. Good Friday’s pageantry is more solemn and portrays Christ’s burial. Grandstand seating on the Piazza del Ponte is available. Mendrisio’s processions can be traced back to around 1600, and in 2019 they were awarded inclusion in UNESCO’s prestigious Representative List of the Intangible Cultural Heritage of Humanity.

Parks, plazas and historic city centers all across Switzerland are transformed into winter wonderlands in the weeks leading up to Christmas Day. At festive holiday markets set up in towns big and small, it’s fun nibbling goodies, imbibing warm beverages and shopping for handcrafted gifts at snug little huts trimmed in evergreen garlands and twinkly lights. With spiced wine, fresh gingerbread, roasted chestnuts, joyful music and happy people all around, it’s easy to get into the yuletide spirit. Advent season is Switzerland at its cozy best.

Called Schwingen, the Swiss form of wrestling is a traditional sport that has seen an upsurge in recent times. Originally a pastime among herdsmen and farmers, Schwingen has expanded into urban areas but is still most popular in rural German-speaking areas of the Alpine foothills. 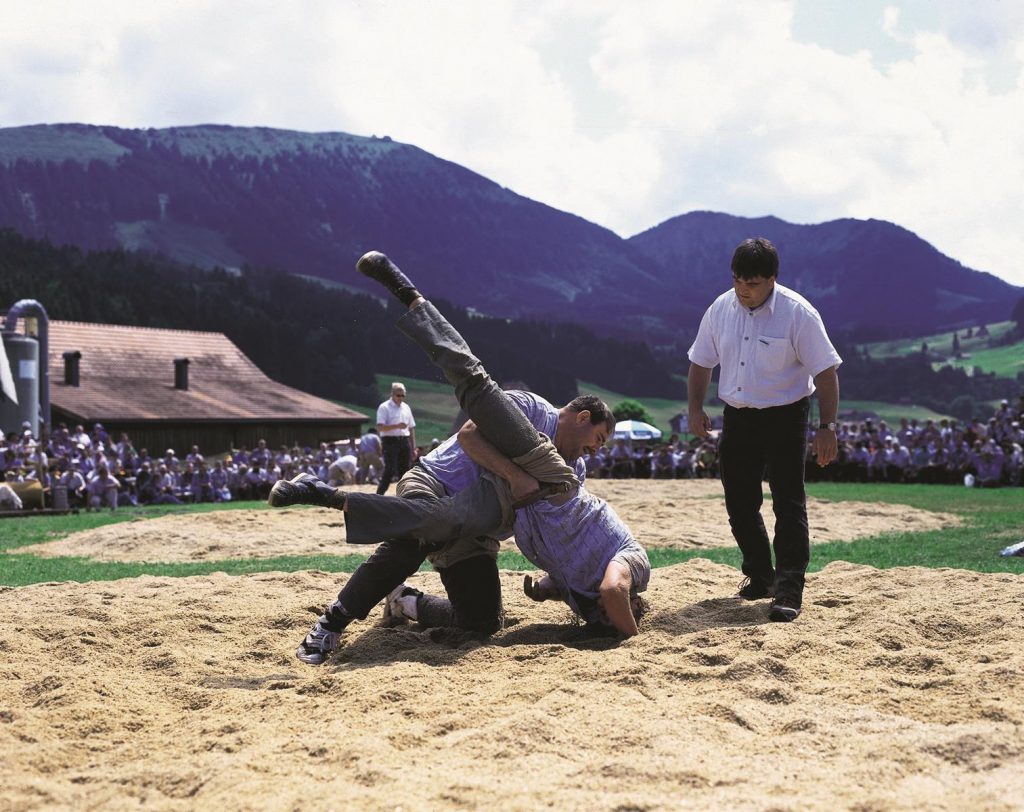 Your holiday. Switzerland. Wrestling match Swiss style in Gonten, Canton Appenzell-Innerrhoden, in eastern Switzerland. The champion is chosen after many matches in sawdust rings. Copyright by Switzerland Tourism. By-line: ST/swiss-image.ch

The sport in Switzerland has its own rules, grips and throws. Matches at Schwingen festivals are duels between two powerful competitors overseen by a referee on the sawdust and two judges at the table. A bout last five minutes and ends when a wrestler touches the ground with his back (both shoulder blades must be within the sawdust circle). Regulations require that the winner wipes the sawdust from the shoulders of the loser. As Schwingen is an amateur sport, no prize money is given, but the winner receives a wreath and gifts.