U.S. aquariums are a favorite among travelers from all over the globe.  Millions flock to these magical places for an up-close and personal look at ecosystems that feel so far away—oceans, rivers and other bodies of water with slippery creatures of all kinds, many of them quite exotic.  Including one of these top-rated aquariums in your itinerary will leave your group members with unforgettable memories.

There are more fish inside Ripley’s than there are people living in the town of Gatlinburg. Venture into the Tropical Rainforest and come face-to-face with piranhas and poisonous dart frogs. Switch your attention from rivers to oceans at Ocean Realm where your group will find weedy scorpionfish, spotted garden eels and flounder. The Coral Reef features colorful clownfish, butterfly fish and the regal blue tang. Visit the brand new exhibit Touch a Jelly. Check out unique experiences like Waddle with the Penguins, Splash with the Rays and Sleep with the Sharks to make your visit unforgettable. 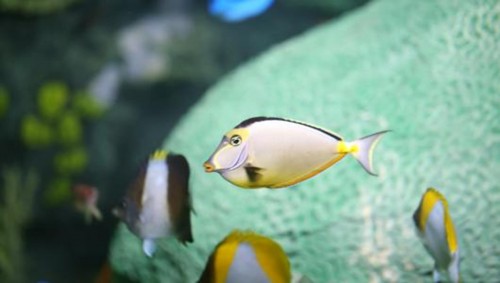 There is plenty for your group to see at Ripley’s Aquarium of Myrtle Beach. Get a hands-on experience at Ray Bay and touch the friendly stingrays. Feeling more adventurous? If so, head over to Dangerous Reef, the home of sawfish, snappers, eels and sharks. Observe puzzling creatures like giant octopuses, sea anemones, jellyfish and weedy sea dragons at the Living Gallery. Groups can take a behind-the-scenes tour of the aquarium and learn about animal care and food preparation. 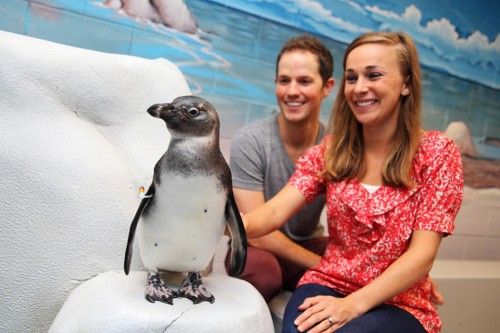 Containing over 10 million gallons of water and attracting more than 18 million visitors since opening in 2005, Georgia Aquarium is the biggest aquarium in the Western hemisphere. It is home to thousands of animals and the only aquarium in North America that houses the largest fish in the world—whale sharks. Go on a Behind the Seas Tour, have an animal encounter, stay overnight or see a show—the possibilities are endless at the Georgia Aquarium. The aquarium’s new exhibit will feature California sea lions in an intimate setting. 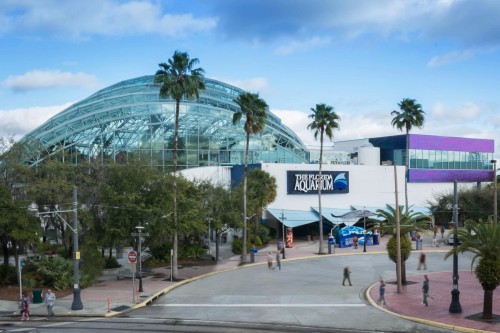 In the Wetlands Trail, guests walk through a glass-paneled dome that allows natural sunlight and warmth for the animals and foliage to survive in this “natural” exhibit. The gallery contains free-flying blue herons and white ibis. View one of the daily otter shows or Animal Encounter shows. The Coral Reef exhibit is home to more than 100 species, a majority native to Florida. Visitors have the opportunity to “Swim with the Fishes” or “Dive with the Sharks.” Groups can see Flip, the endangered green sea turtle, and a large sand tiger shark.

This aquarium is part of the Audubon Nature Institute, which also maintains a zoo and an insectarium. Parakeet Pointe is home to more than 100 parakeets; purchase a seed packet and feed the birds as they fly around. Another highlight is the penguin exhibit, home to rockhoppers from South America and African penguins. Walking around the Mississippi River Gallery, gaze into the blue eyes of Spot, the famous white alligator. Thought to be albino, he’s really luecistic, a gene mutation that accounts for his lack of color. Also be sure to see the catfish, sturgeon and paddlefish.

Among the aquarium’s 70 exhibits in 14 galleries is Dangerous and Deadly, which features the misunderstood inhabitants of the aquatic world, such as the stonefish, lionfish and piranha. Take a trip down Gator Alley, where your group can meet Mighty Mike, a 14-foot, 800-pound gator. In the Shore Gallery guests will discover fish that have four eyes and fish that can walk right out of the water. In the Kroger Penguin Palooza, witness the penguins of the Antarctic. The popular aquarium is located only two minutes from downtown Cincinnati at Newport on the Levee, an entertainment/shopping complex on the Ohio River. 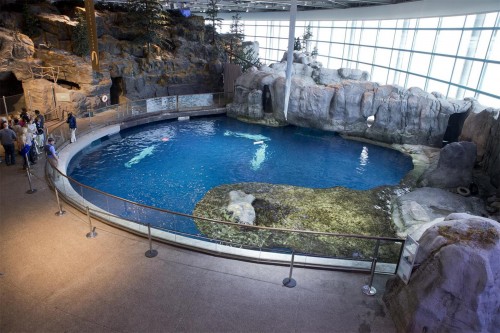 Fittingly located on Lake Michigan,the Shedd Aquarium is the perfect place to explore local and global ecosystems. Venture through Amazon Rising to see piranhas, monkeys and an anaconda. Then take your group to the Caribbean Reef, where they will get a 360-degree tour of an underwater reef. Wild Reef showcases the coral reef of the Philippines—see sharks, stingrays and live coral. Waters of the World takes guests to habitats in such places as Asia, Africa and South America. Guests get an in-depth look at what lies on the other side of the window while touring At Home on the Great Lakes. Immerse yourself in the world of dolphins, beluga whales, sea lions and otters at the Abbott Oceanarium.

The National Mississippi River Museum and Aquarium explores wildlife that is found in the Mississippi River and Gulf of Mexico. Visitors will be able to observe animals like giant catfish, sturgeon, frogs, turtles, rays, octopuses and river otters. Educator talks and creature features are daily activities. Guests can witness a Paddlefish Feeding and listen to the Green Sea Turtle Chat. Get an exclusive look at the ecosystems of the Mississippi River.

Located in an unsuspecting place, the Mall of America, is SEA LIFE Minnesota Aquarium, the largest underground aquarium in the world. It is home to a 300-foot ocean tunnel, 30 display tanks and over 10,000 sea creatures. Interactive touch pools, talks and feedings entertain guests daily. One-of-a-kind activities such as Feed the Rays, Behind-the-Scenes Tours, Snorkel Programs, Dive Programs, Overnights and Sharks After Dark will provide your group with an unforgettable experience.

SEA LIFE of Kansas City allows groups to get up close and personal with thousands of animals such as sharks, seahorses, octopuses, jellyfish and stingrays. Educational talks and feedings are provided throughout the day and will give your group the opportunity to learn about marine animals and ecosystems. The Interactive Rockpool allows guests to hold crabs and touch a live starfish. Walk through an underwater tunnel where sharks and rays swim above your group. 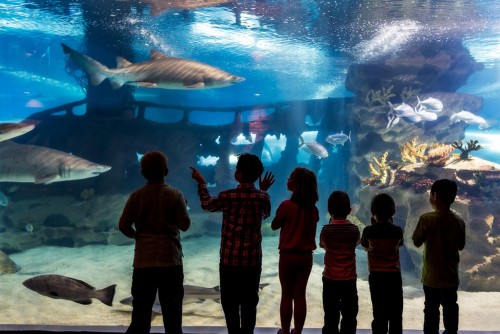 The galleries at the Greater Cleveland Aquarium will transport your group to places like Australia, South America and Africa. Learn about local ecosystems in Ohio Lakes and Rivers, where you will find catfish, bass, turtles and reptiles native to the Great Lakes. The Shark SeaTube houses four species of sharks, moray eels, groupers and stingrays. The Discovery Zone is dedicated to showing pollution’s effects on ecosystems and how individual efforts can reduce the problem. Daily feedings and animal encounters will keep your group entertained. 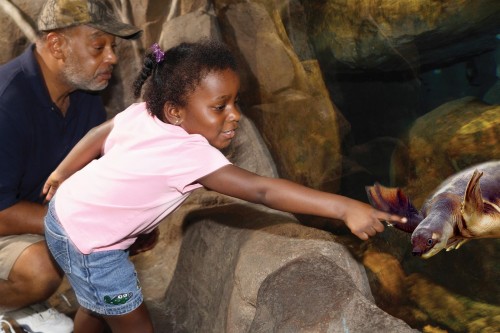 One of the top-rated aquariums in the country, the National Aquarium brings the aquatic world to Baltimore’s Inner Harbor with 20,000 animals in award-winning exhibits. Guests can encounter a 500-pound green sea turtle in an Indo-Pacific reef, explore the colorful canopy of a tropical rain forest, descend into shark territory and get hands-on with Mid-Atlantic animals in Living Seashore. With special talks, feedings and animal encounters daily, there’s always more to discover.

Adventure Aquarium is home to more than 8,000 animals, including the largest collection of shark species on the East Coast. Shark Realm will immerse you into the world of sharks with a tunnel that offers 360-degree views. Surprisingly, sharks are not the biggest animals that call this aquarium home; two Nile hippos named Button and Genny also live here. Hippo Haven will educate guests about these 3,000-pound beasts, the most powerful animal in the world. 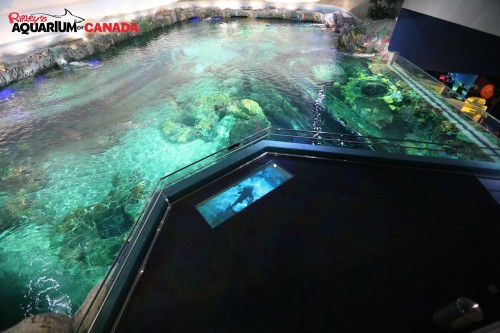 Home to North America’s longest underwater viewing tunnel, 16,000 aquatic animals and over 100 interactive opportunities, Ripley’s offers much to discover. Your group will venture through galleries such as Canadian Waters, Rainbow Reef, Dangerous Lagoon, Planet Jellies and Ray Bay, which showcase saltwater and freshwater environments around the world. Get up close and personal with horseshoe crabs, sharks and stingrays at the three touch exhibits. Get a one-of-a-kind experience with overnight programs like Sleep with the Sharks. 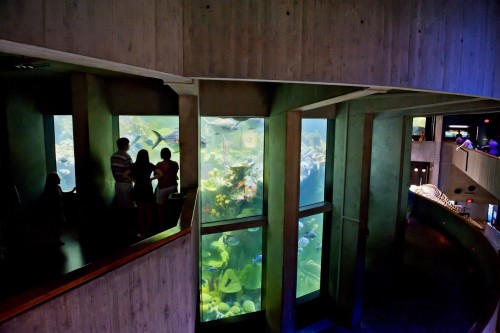 The New England Aquarium, a global leader in saving endangered turtles, debuts a new exhibit dedicated to giving guests experience with diagnosing, treating and rehabilitating turtles. In addition to turtles, the aquarium has a Giant Ocean Tank, which simulates a Caribbean reef where you will find sharks, turtles, stingrays, eels and barracudas. Your group can visit Myrtle, the resident 80-year-old sea turtle who has lived here since 1970. Get hands-on at the touch tank where you can gently touch rays and sharks. 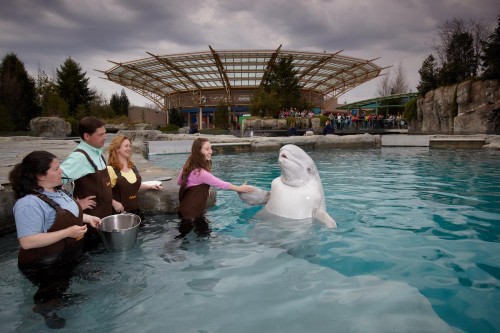 At Mystic Aquarium your group will meet New England’s only beluga whales. These whales live in 750,000 gallons of water, making it one of the biggest beluga whale exhibits in the United States. Other popular residents include 28 African penguins. Take your group on a tour of intriguing habitats like the Rainforest, Wetlands, Desert and Open Oceans at Exploration Wild. Sea lion shows, shark and ray feedings are offered. Behind-the-scenes encounters give small groups a look at penguins and beluga whales.