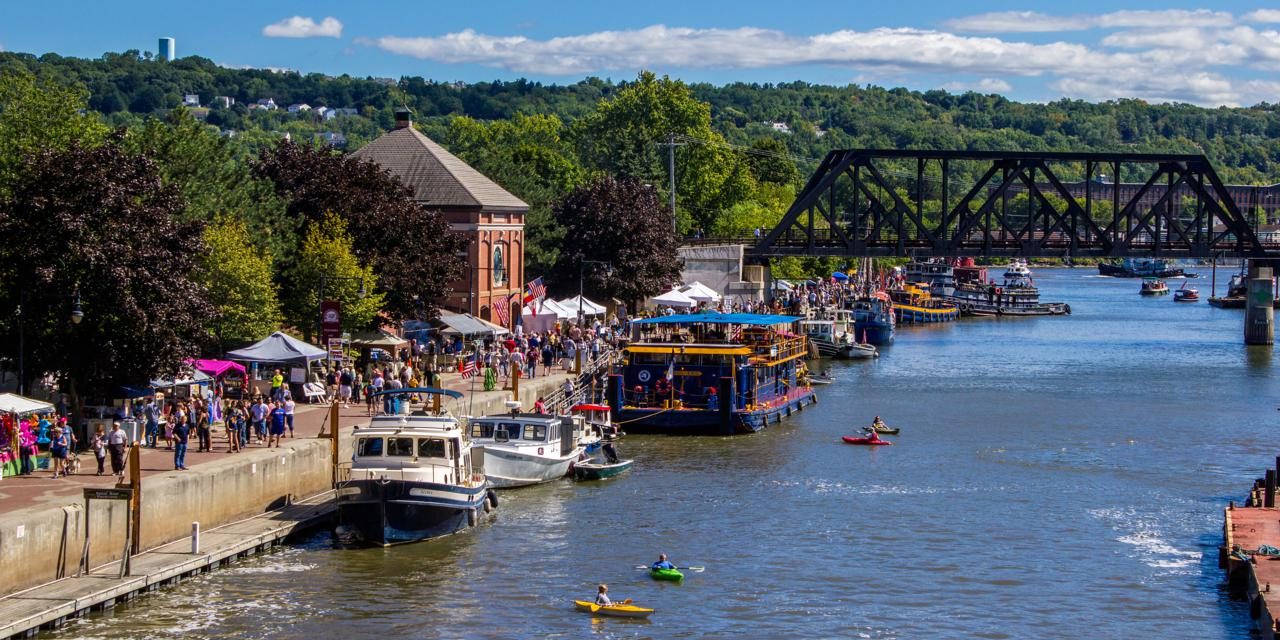 No manmade waterway had a greater effect on the growth of the United States than the Erie Canal, an engineering marvel that transformed the wilderness of Upstate New York and opened up the American frontier for development.
Following an east-west route through the heart of New York State, the canal extends 340 miles from the Hudson River near Albany to Lake Erie at Buffalo. When completed in 1825, it was the second longest canal in the world after the Grand Canal in China.
In the beginning, the ambitious project spearheaded by New York Gov. DeWitt Clinton was decried as “Clinton’s Folly” or “Clinton’s Ditch.” But the artificial artery, carrying both settlers and cargo, eventually made it possible to travel from New York City on the Atlantic to the Great Lakes and beyond. The canal circumvented the Appalachian Mountains, a major transportation barrier between the East and Midwest. 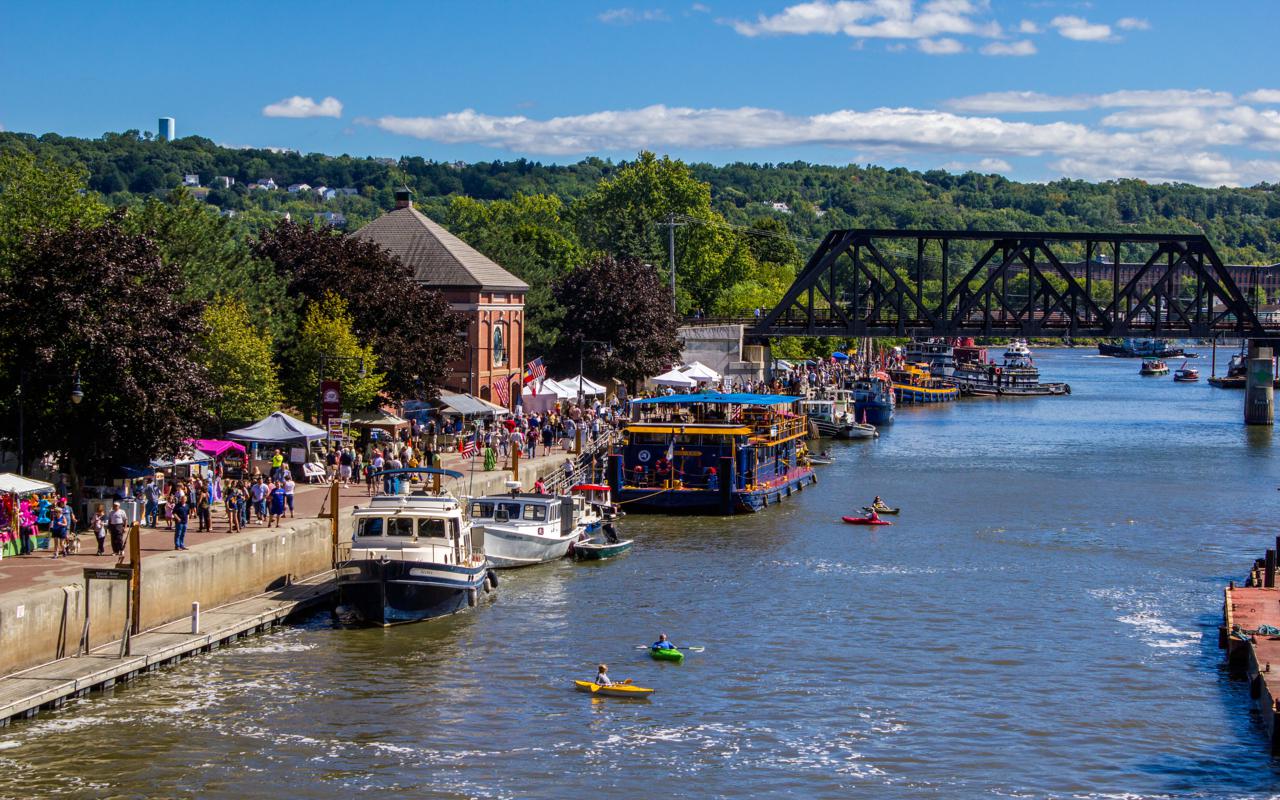 The Erie Canal observed its peak year in 1855, when 33,000 shipments of agricultural and industrial goods took place. Though the canal still has some commercial traffic, it is now used mainly by recreational watercraft. Competition from railroads starting in the mid-1800s reduced its economic importance, which eroded further with the opening of the St. Lawrence Seaway a century later.
Of prime interest to group tour planners, the towns along the historic canal abound with tourist attractions and activities. Waterfronts in the Erie Canal National Heritage Corridor (eriecanalway.org) lead to charming Main Streets filled with historic buildings and one-of-a-kind shops. Canalside parks—many of them at lock sites—offer hiking and biking paths, and there are kayaks, canoes and stand-up paddleboards to rent. Many popular sites are on towpaths where teams of mules and horses once pulled the canal barges.
Several tour boat companies offer Erie Canal excursions from May to October. From the marina at Herkimer, for example, Erie Canal Cruises operates 90-minute narrated trips on the 48-passenger Lil’ Diamond II and 100-passenger Lil’ Diamond III. The cruise includes a lock through experience in which water levels raise and lower the boat 20 feet at Lock 18, one of the last remaining locks operating with all of the original equipment. Designed for groups, the six-hour “Two Lock Living History Cruise to Historic Herkimer Home” starts with a tour of the home of Revolutionary War hero General Nicholas Herkimer, a BBQ feast under a tent on the grounds and an 18th century chocolate-making demonstration by costumed docents.

Canal excursions also are available in the Greater Rochester area. From Pittsford, Corn Hill Navigation’s Sam Patch, a 40-passenger packet boat replica, passes through a lock on 90-minute cruises. Lunch can be arranged on the noon cruise, and there are evening wine-tasting outings. The 149-passenger Colonial Belle, the largest tour boat on the Erie Canal, includes a lock passage on its twoor three-hour sightseeing, lunch and dinner trips from Fairport to Pittsford and back. 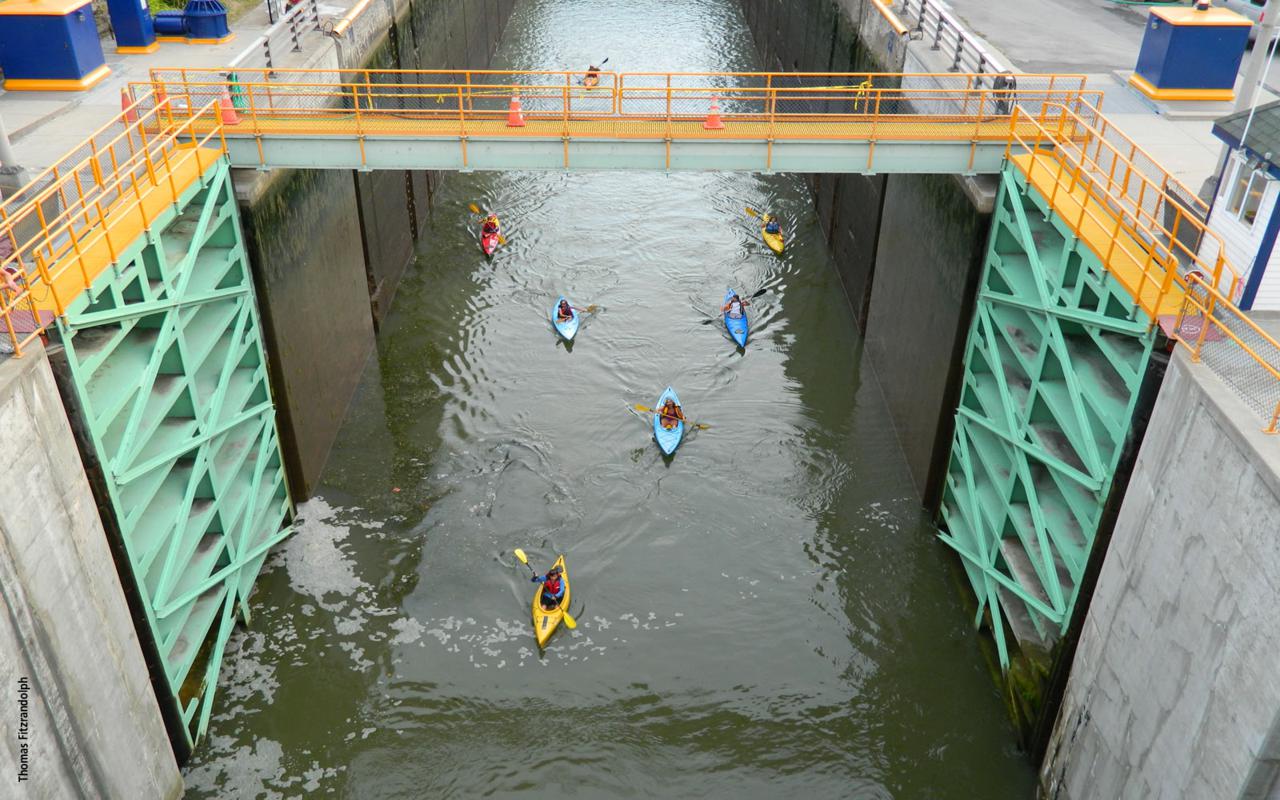 From an 1840s stone warehouse in Lockport (20 miles east of Niagara Falls), Lockport Locks & Erie Canal Cruises operates the 48-passenger Lockview IV, 125-passenger Lockview V and 150-passenger Lockview VI, the latter a Mississippistyle sternwheeler. At the only double set of locks on the Erie Canal, the boat is raised 50 feet as three million gallons of water fill locks 34 and 35. Boats pass under Lockport’s Upside Down Bridge and its 399-foot-wide Big Bridge, the widest bridge in North America.
Lockport Cave & Underground Boat Ride, a 70-minute tour, involves a walk and boat ride through a limestone tunnel that once channeled hydropower from the historic Flight of Five (locks 67-71) to a waterwheel that supplied three industries. Tour members see cave formations and remnants of artifacts left behind by miners in the 1850s.
Inside an 1843 stone building, next to the Flight of Five and Locks 34 & 35, is the Erie Canal Discovery Center. The 15-minute movie Gateways East & West discusses the building of the canal and the Flight of Five and Deep Cutting – the massive project at Lockport. Part-way through the movie, museum-goers board a “packet boat” for a simulated nighttime ride through one of the 1820s locks. Interactive displays let visitors try their hand at moving a boat through these “liquid elevators,” hear from people who worked on the canal, explore the task of cutting through the bedrock and test their knowledge of the canal. 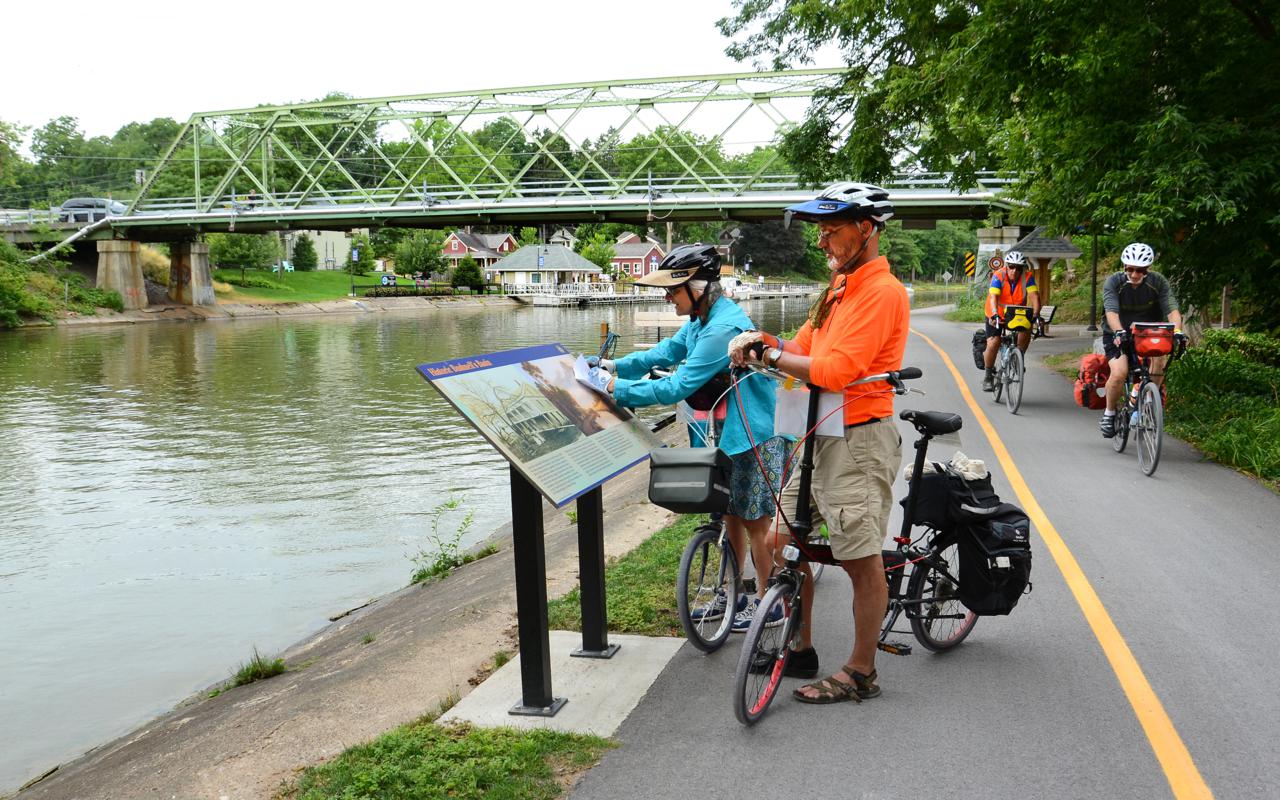 Old Erie Canal State Historic Park, which covers a 36-mile section of the old canal, is home to both the Chittenango Landing Canal Boat Museum in Chittenango and Canasota Canal Town Museum in Canasota. The former emphasizes boats, while the latter explains how the canal shaped the small towns along its banks.
The Sims Museum at Camillus Erie Canal Park in Camillus is housed in the original Sims canal store and has authentic displays of items that would have been for sale. Four vessels offer 45-minute cruises, including dinner trips on the Iroquois on Wednesdays in summer.
In downtown Syracuse, the Erie Canal Museum occupies an 1850 building where boats were weighed and tolls assessed. The former weigh station for boats is the only remaining weighlock building in the country. Exhibits chronicle the canal’s history and life in canal towns. Visitors can see a 65-foot-long reconstructed canal boat and an introductory film on the city. The Locktender’s Garden is a recreation of a Victorian-era canalside garden with plants authentic to the period.
Going through the locks, walking along towpaths and perusing museum exhibits, travelers exploring the Erie Canal corridor can’t help being swept up in nostalgia. It’s a big swath of New York worth including in your next group tour.
-Randy Mink