Cooperstown Steps up to the Plate with Group-Friendly Options 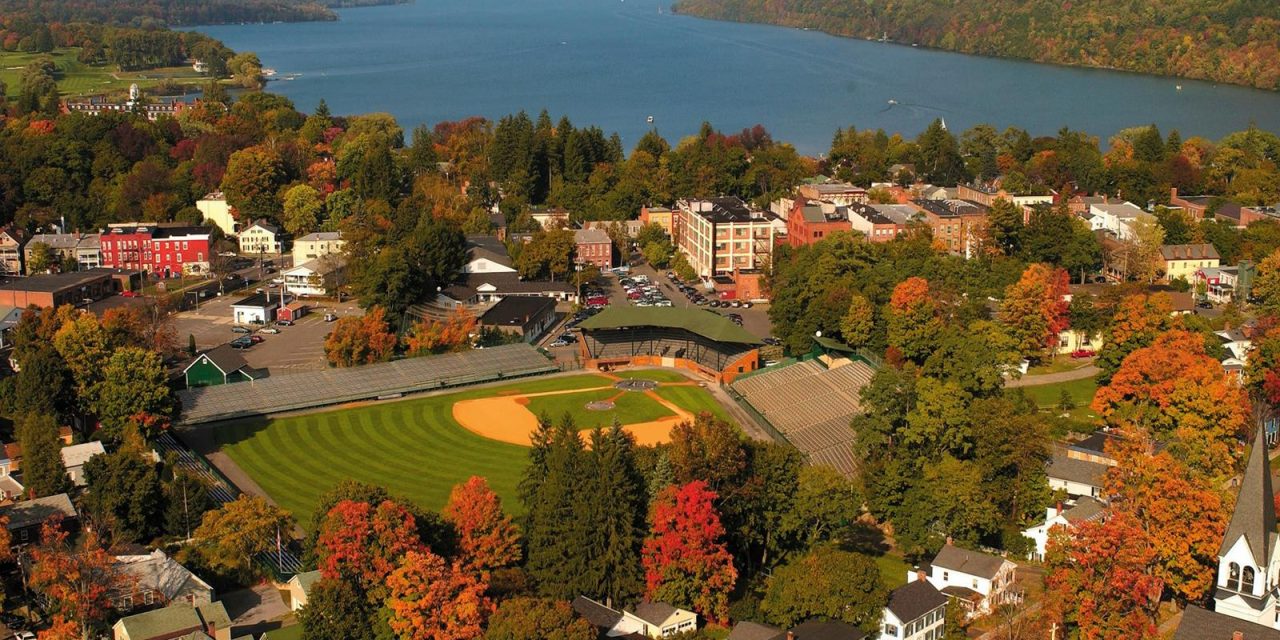 Besides baseball’s premier museum, what else is there to see? Lots!

Cooperstown, to the out-of-town visitor at least, is all about nostalgia. It seems to be one of those unspoiled Main Street communities that harks back to the innocent times suggested in Norman Rockwell paintings. So idyllic that Cooperstown bills itself as “America’s Most Perfect Village.” 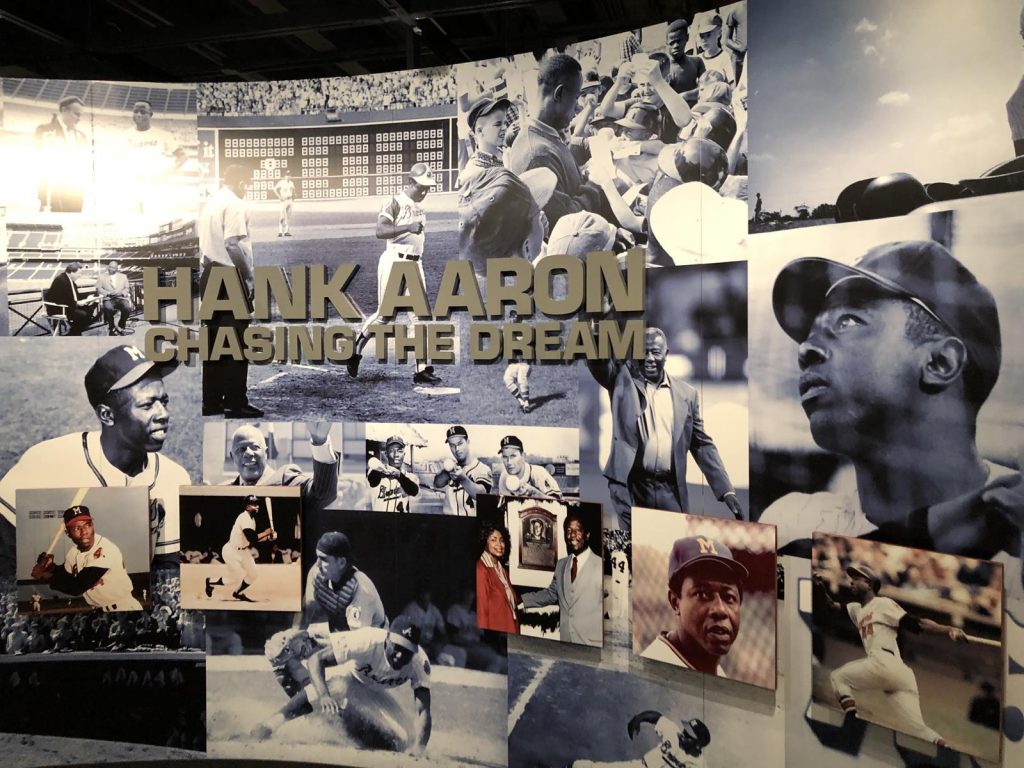 All-time greats like Hank Aaron are remembered at the National Baseball Hall of Fame.

Throw in the ultimate shrine to baseball and you’ve got a grand slam, for it’s the National Baseball Hall of Fame and Museum that puts little Cooperstown on the map. This star attraction, along with baseball memorabilia shops up and down Main Street, spells nirvana for genuine fans of America’s national pastime. The hallowed hall, in fact, is a bucket-list destination that avid devotees of Major League Baseball, no matter their team, want to see before they die. 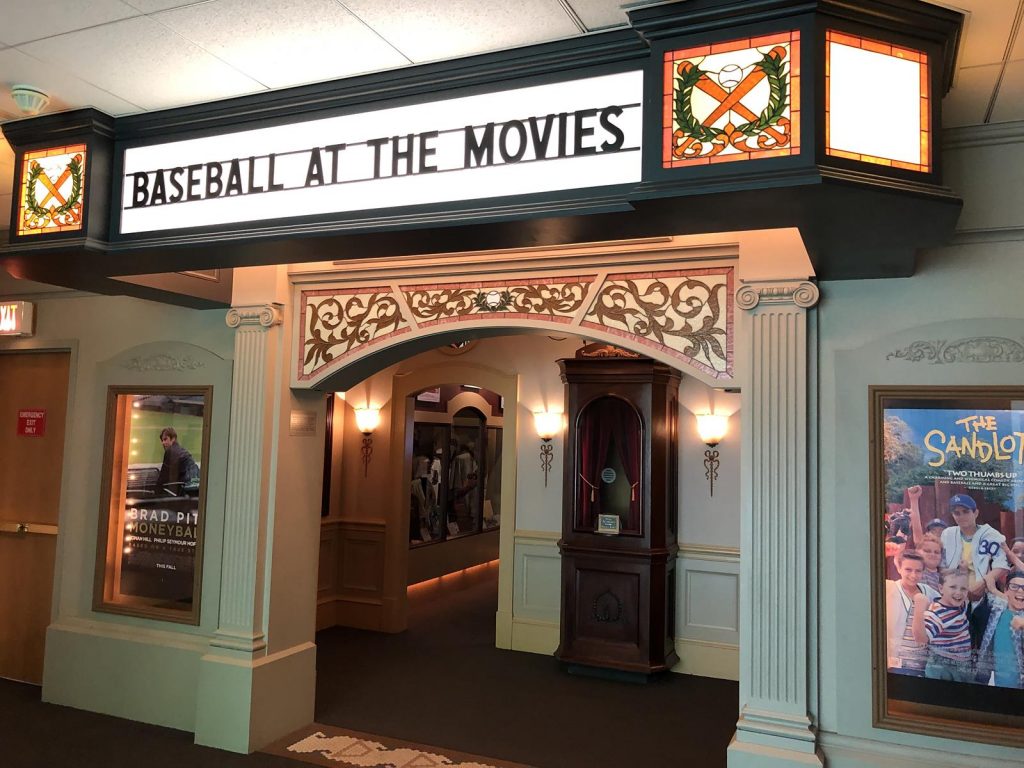 The word “Cooperstown” is practically synonymous with this repository of everything baseball—say the town’s name and the Hall of Fame immediately comes to mind. Most people, though, are a little foggy about Cooperstown’s location.

Situated amid forested hillsides and rolling farm fields in central New York, Cooperstown isn’t really close to any place of note. It’s a 90-minute drive west of Albany, while Boston and New York City are 3½ hours away. 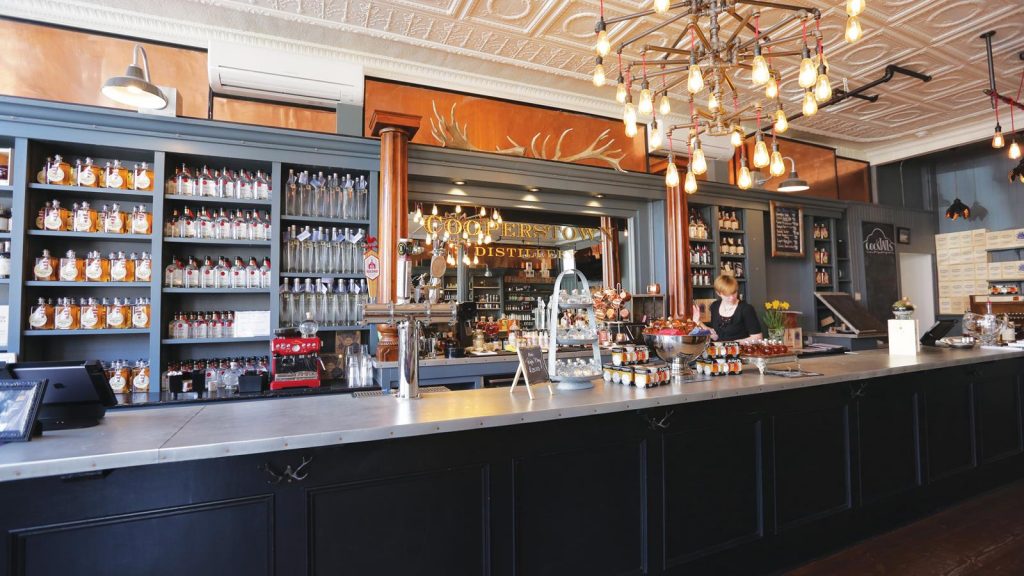 Arriving in the all-American town, first-timers are charmed by the houses with gingerbread trim or New England-style shutters. Many homes on the tree-lined streets are decked out in flags or red-white-and-blue bunting reminiscent of the World Series. A few are inns, including one named Baseball Bed and Breakfast.

The “Cooper” in Cooperstown can be traced to William Cooper, who founded the settlement at the southern tip of Lake Otsego in 1786. Best known of his 12 children was James Fenimore Cooper (1789-1851). Considered to be America’s first true novelist, he penned classics like The Deerslayer and The Last of the Mohicans. Two stories in The Leatherstocking Tales refer to natural settings in the area.

Arts and Culture in Cooperstown

The Fenimore Art Museum, on lakefront property once owned by the Cooper family, boasts an outstanding array of American fine art and folk art. On display are paintings by Grandma Moses and Thomas Cole, quilts, weather vanes and carved wood sculptures like ship figureheads and an 1870 cigar store Indian. The Clare E. and Eugene V. Thaw Collection of American Indian Art, one of the finest such collections in the world, has masks, woven blankets, moccasins, war clubs, necklaces,  baskets and pottery; some objects date back as far as the 1600s. Rare artifacts include Chief Black Hawk’s drawing book, a Tlingit wooden chest and war helmet from Alaska, and a magnificent eagle feather headdress from a Plains tribe in the Dakotas. 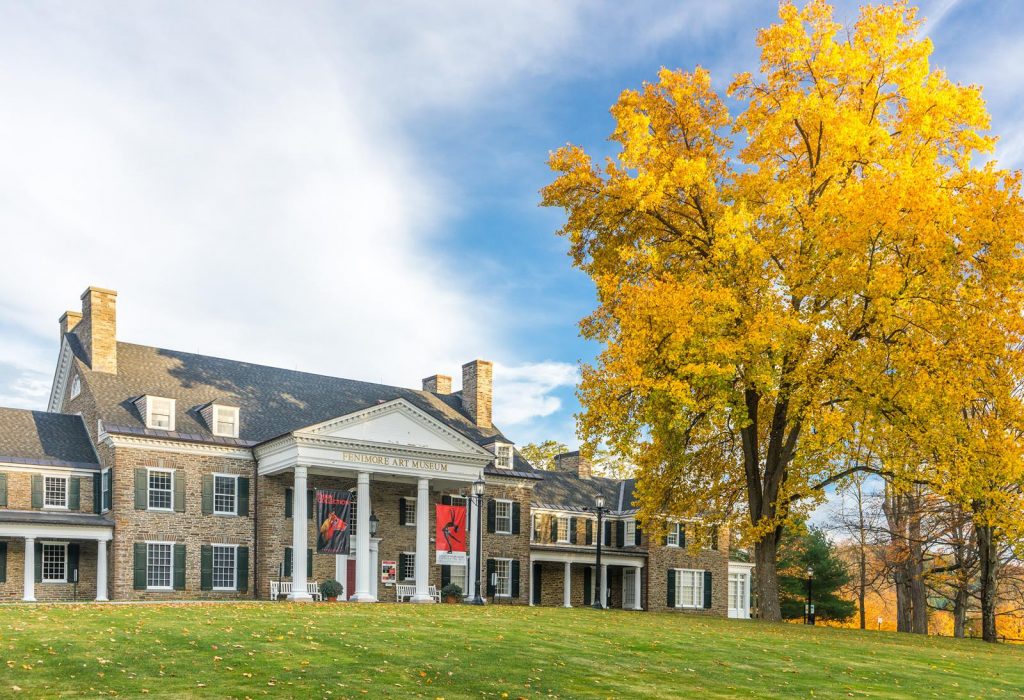 On display in a gallery dedicated to James Fenimore Cooper and his family are a bust of Chingachgook (a fictional character in The Last of the Mohicans) and a suit worn by Cooper at about age 16, around the time he was expelled from Yale University for a dangerous prank that involved blowing up another student’s door.

Through December 31, 2019, the exhibition Hamilton’s Final Act: Enemies and Allies showcases the Fenimore Art Museum’s collection of original letters and documents that led up to the duel in which Aaron Burr, Thomas Jefferson’s vice president, killed political rival Alexander Hamilton near Weehauken, New Jersey, in 1804.

The museum’s Fenimore Cafe, with seating on the terrace overlooking Otsego Lake, is the perfect place for a group lunch. 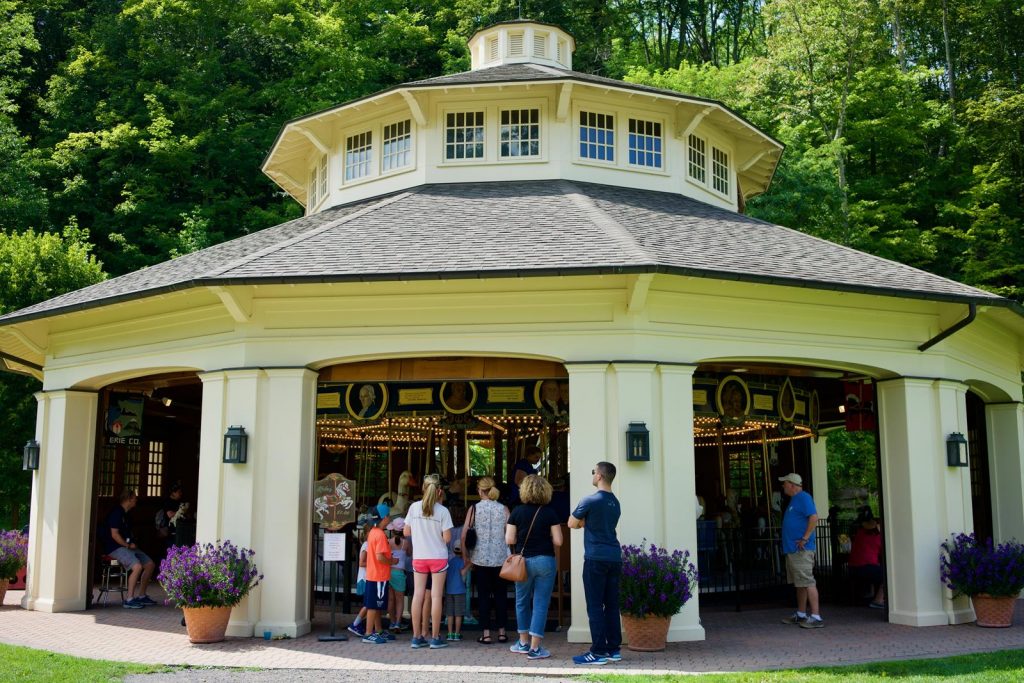 The Farmers’ Museum, the art museum’s sister institution, is just across the road. At this historical village and farmstead depicting 19th century life, visitors can meet animals and tour buildings where costumed interpreters demonstrate pioneer skills like bread baking, blacksmithing, broom making and mixing herbs for medicines. The 1832 pharmacy, 1800 farmhouse, 1775 tavern and other vintage buildings, all from a 50-mile radius of Cooperstown, were transported and reassembled by the museum between the 1940s and 1960s. 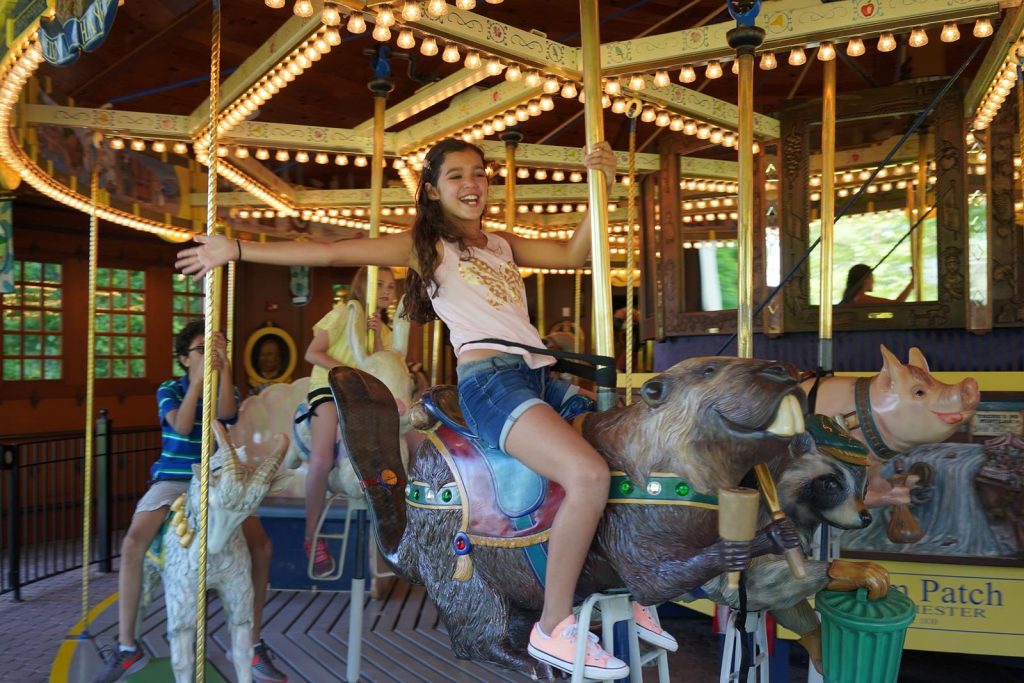 The Empire State Carousel has more than horses.

The museum’s 1917 fieldstone dairy barn, owned by gentleman farmer Edward Clark and original to this site, has a vast collection of antique tools and farm implements, from a hop press and butter churn to maple syrup and cider-making equipment. (Clark was the brother of art connoisseur Stephen C. Clark, whose trove of treasures formed the basis for the Fenimore Art Museum, originally built as his home. The Clark family, heirs to the Singer Sewing Machine Co., started the National Baseball Hall of Fame, and their foundation still plays a big role in the life of the community.) 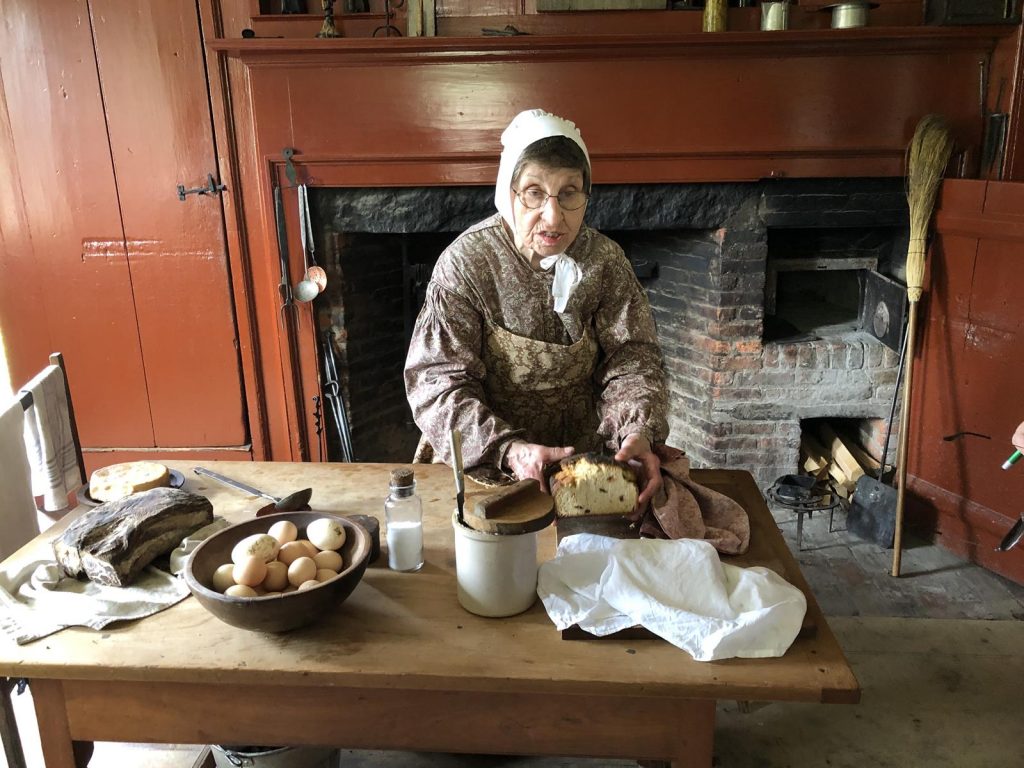 Demonstration of old-time cooking at The Farmers’ Museum

On view in the barn through October 2020 is Brew: New York’s Craft Beer Revival, an educational exhibit about how beer is made and the resurgence of craft beer. Before Prohibition, the Cooperstown area was the epicenter of hops production in the U.S. 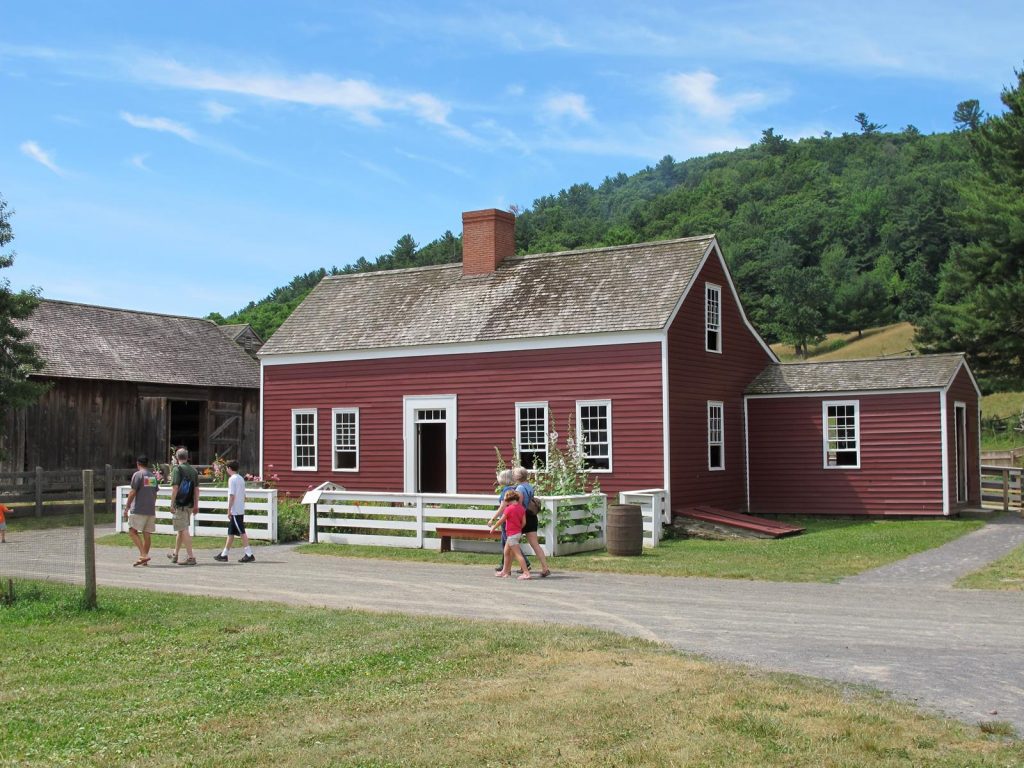 Another Farmers’ Museum highlight is the Empire State Carousel, which is decorated with scenes from New York history and images of famous New Yorkers. In addition to the hand-carved horses, riders can choose to hop aboard a bear, moose, raccoon or farm animal like Charlotte the Chicken and Percy the Pig.

Majestic Hotel on the Lake

Just down the road lies one of the East’s great historic hotels, yet another property built and still owned by the Clark family. Dating from 1909, the stately, 132-room Otesaga Resort Hotel commands 700 feet of Otsego Lake shoreline. Sitting on a rocking chair on the veranda stirs up visions of a bygone era. Guests also can take in lake views on the patio of the Hawkeye Bar & Grill or gather at night around the Fire Bar, with barstools circling the flames. A spacious lawn sprawls between the patio and the lake. 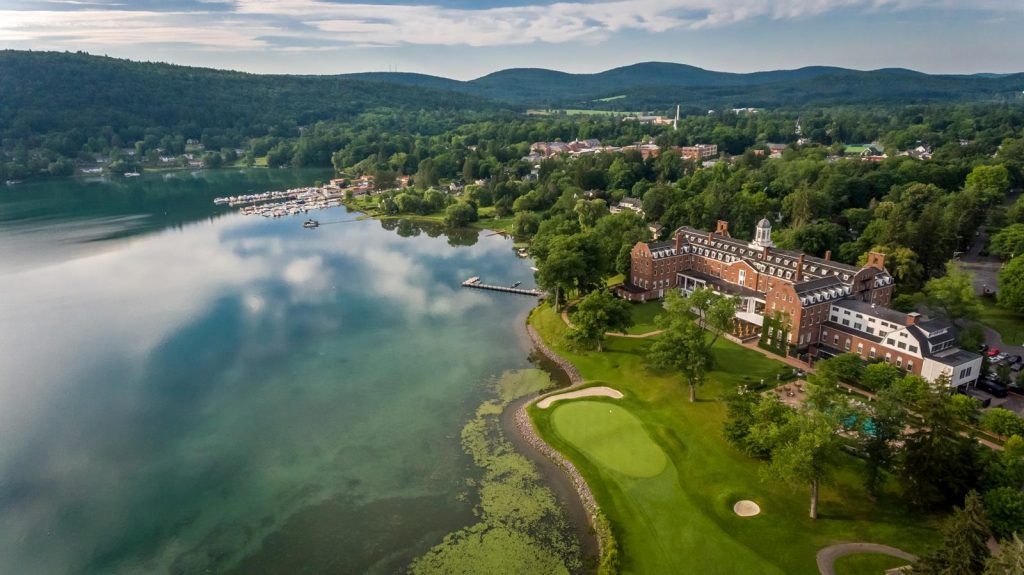 With its white-columned portico and fourth- and fifth-floor dormers, the red-brick, colonial-style landmark bears the trappings of a grand manor house. The formal lobby features a fireplace, plush carpeting and long floral drapes adorning windows that look out onto the lake. Gilt frames accent the mirrors and artwork. Wide hallways and high, corniced ceilings add to the sumptuousness. A special delight is the lavish breakfast buffet in the Glimmerglass dining room, where domed silver warming dishes offer everything imaginable, including corned beef hash and chipped beef in white cream gravy. 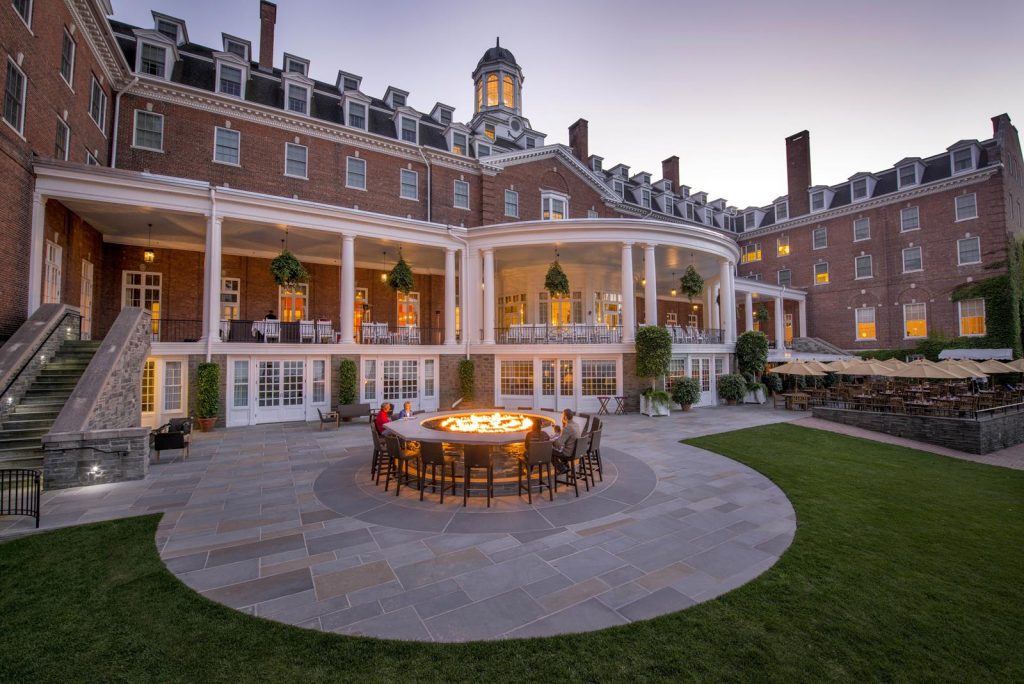 When the Otesaga first opened, it catered to wealthy city dwellers who brought along their nannies and chauffeurs. (The Clarks also built the exclusive Dakota apartment building in New York City.) The hotel operated only during the summer months, serving as a girls’ school the rest of the year. A member of Historic Hotels of America, the Otesaga now closes for the season after Thanksgiving and reopens in April, though it stays open in winter for groups. About 60 percent of its business is groups. Many guests in summer are the parents of kids attending the baseball program with their hometown teams at Cooperstown Dream Park, a tournament facility nine miles from town. 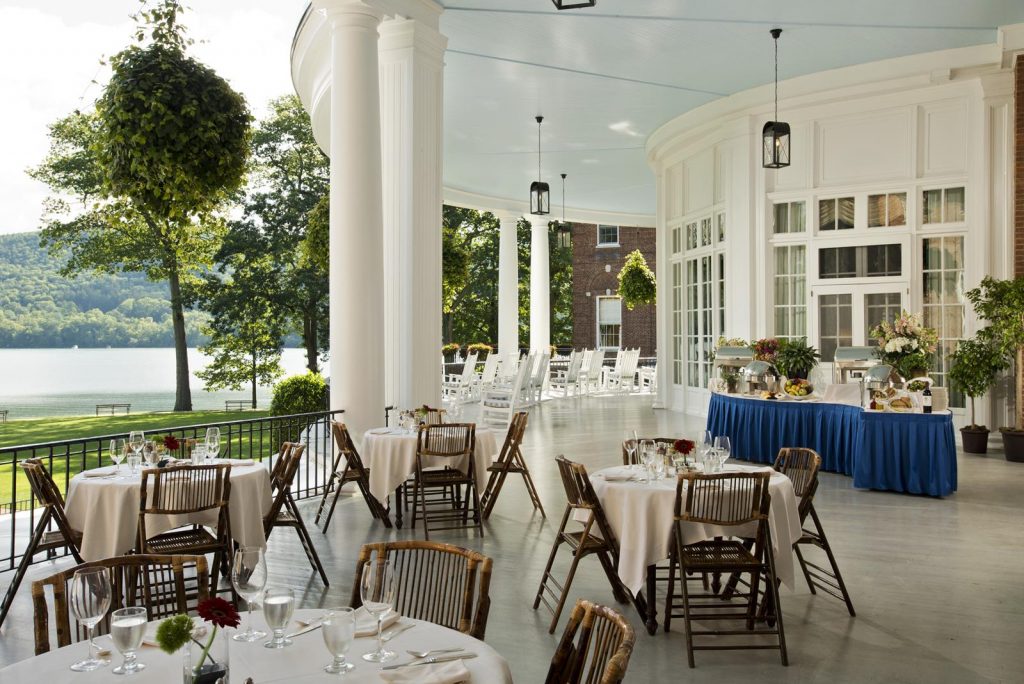 Dining on the veranda at the Otesaga Resort Hotel

Resort activities at the hotel include kayaking, canoeing, paddleboarding, fishing and biking rentals. The lakeside swimming pool is heated, and there is lake swimming as well. Another amenity: the 18-hole Leatherstocking Golf Course, which welcomes non-guests.

The Otesaga is a short walk to the Main Street shops and National Baseball Hall of Fame and Museum. Guests can pick up the hotel’s self-guided walking tour brochure that lists points of interest such as historic houses, churches, statues and parks. 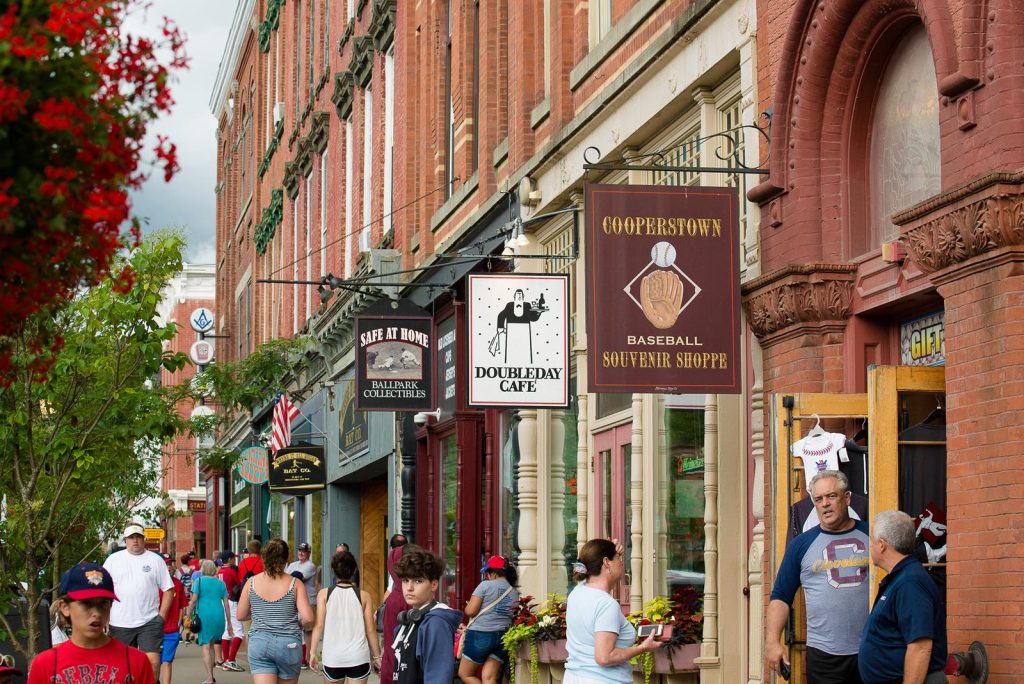 Shops like Mickey’s Place, Seventh Inning Stretch, Baseballism and Safe at Home Ballpark Collectibles purvey everything from cards, caps and T-shirts to bobbleheads, mascot figures and team-logo sleepwear. Player-autographed memorabilia, like jerseys, baseballs and framed photos, can cost hundreds, even thousands, of dollars. Several stores sell personalized baseball bats and balls that can be engraved with your name. But the shopping scene is not all baseball. Main Street also has emporiums specializing in crafts, home decor and fashions—these shops are listed in “Ladies Guide to Cooperstown,” a brochure produced by the chamber of commerce.

Cooperstown Beverage Exchange, five doors down from the Hall of Fame, is the place to enjoy locally made beer, cider, wine and spirits. Products for sale include Cooperstown Distillery vodka or bourbon whiskey in clear, baseball-shaped decanters. The distillery, located a few blocks away, offers tours and tastings. 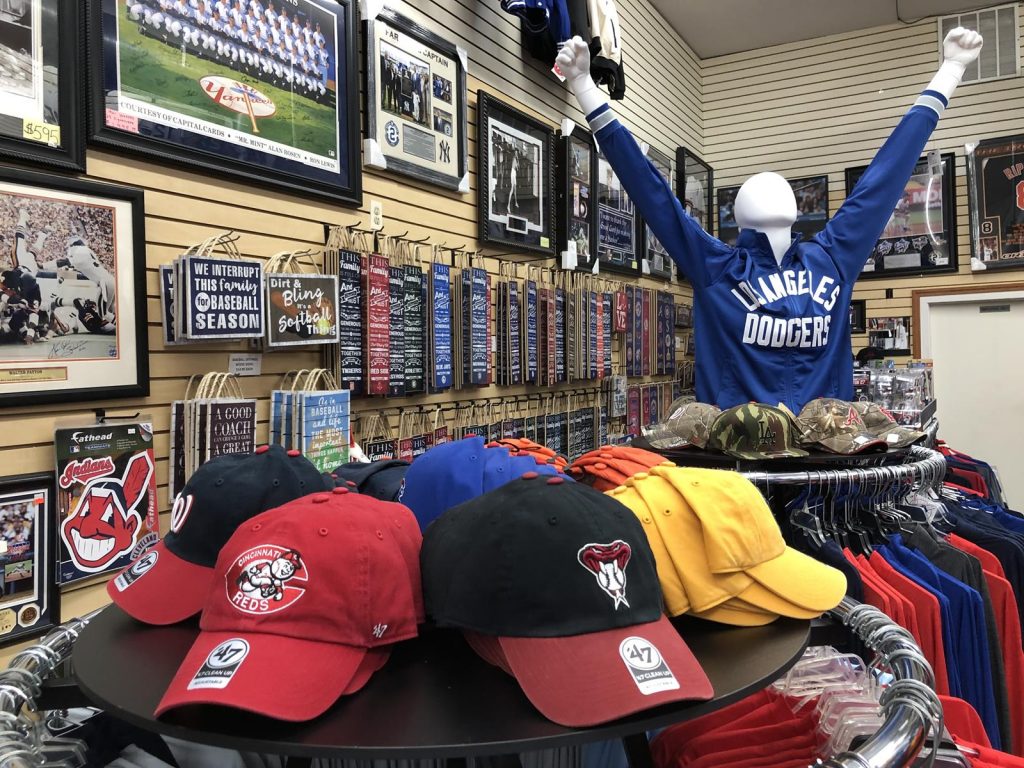 Folklore has it that the first baseball game was played in Cooperstown in 1839, a myth that fueled the Clark family’s vision for the National Baseball Hall of Fame. The first Hall of Fame class (including greats like Babe Ruth and Christy Matthewson) was inducted in 1936; the museum itself opened in 1939.

Today fans can see not only bronze plaques honoring their favorite players but room after room of exhibits highlighting the history of the sport and recognizing the achievements of individuals like Ruth, Pete Rose and Hank Aaron. Visitors can select videos showing memorable moments from the past and catch clips of baseball-themed Hollywood movies like Field of Dreams, A League of Their Own and The Pride of the Yankees. The gallery Pride and Passion: The African-American Experience pays tribute to stars of the Negro Leagues, while a bilingual gallery showcases outstanding Latin American players and their home countries. Important women in baseball also are recognized. The new Shoebox Treasures exhibit focuses on baseball card collecting. In the clubhouse setting of the Locker Room, memorabilia and video highlights from all 30 big-league teams draw in their fans. And don’t miss the Grandstand Theater’s action-packed orientation movie, Generations of the Game. 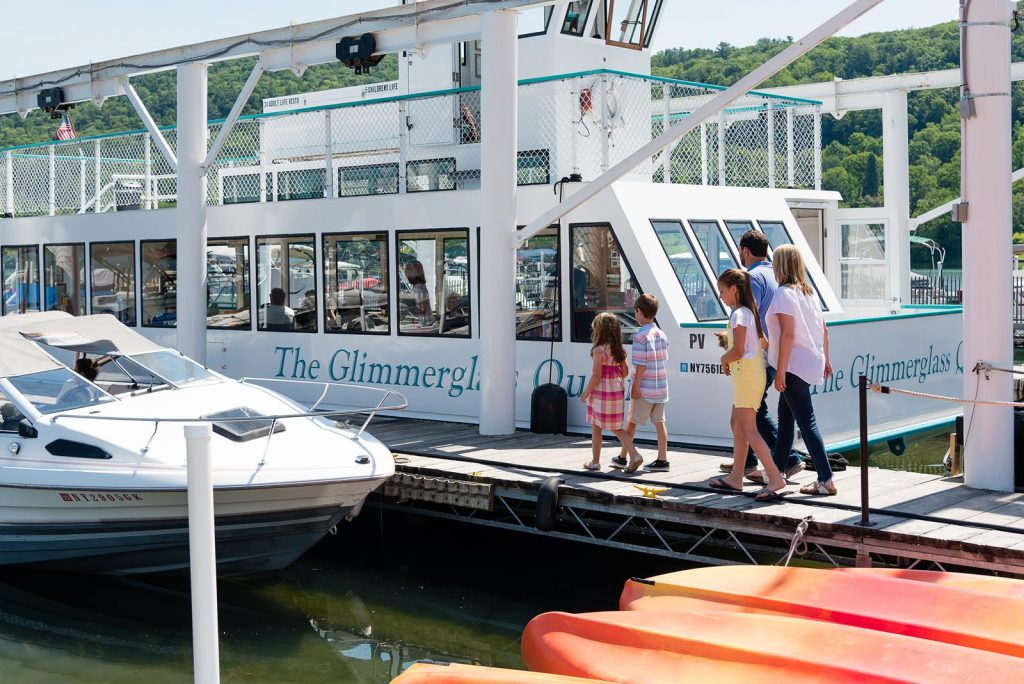 Also enhancing group itineraries in the Cooperstown area are cruises on the Glimmerglass Queen, an Otsego Lake excursion boat; train rides on the Cooperstown and Charlotte Valley Railroad; and Fly Creek Cider Mill & Orchard, which offers generous free samples of apples, apple wines, ciders and dozens of other local food items. Belgian-flavored Ommegang Brewery, located on the site of an old hops farm, makes a fun lunch stop and offers tours as well.

For more information on Cooperstown and Otsego County, visit thisiscooperstown.com.